Rashid: Designs on the Guggenheim

NEW YORK — If he is selected as the architect of the next Guggenheim, Hani Rashid will join the ranks of elite designers such as Frank Lloyd Wright and Frank Gehry, as well as fulfill a professional dream.

Rashid, a rising star in... 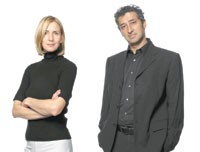 NEW YORK — If he is selected as the architect of the next Guggenheim, Hani Rashid will join the ranks of elite designers such as Frank Lloyd Wright and Frank Gehry, as well as fulfill a professional dream.

Rashid, a rising star in architecture, has mainly been recognized as one of the founders of the “blob,” or digital architecture. Using the film industry’s sharpest animation software as a design tool, he integrates the ideas of globalization and media saturation into his projects, creating spaces that are dynamic and interactive. “Rashid is a very strong architect; he has a vision,” explains master architect Daniel Libeskind, who was Rashid’s professor at the Cranbrook Academy of Art in Bloomfield Hills, Mich. “His work has a very strong impact on the field of architecture.”

Tall and charming, like his younger brother, industrial designer Karim Rashid, the jet-setter rarely sets foot in New York, where he lives. He’s constantly bombarded with invitations to international panels, competitions and biennials. His firm, Asymptote, which he founded in 1987 with his wife and partner, Lise-Anne Couture, is best known for virtual projects such as Guggenheim.com, designed in 1998. But recently, Asymptote has started to build real spaces. Acclaimed for the design of the New York Stock Exchange’s trading floor (1997-2000), the Hydra-pier in Holland (2002), the Knoll A3 office furniture line (2002) and Brazilian designer Carlos Miele’s boutique in Chelsea (2003), Rashid and Couture won the prestigious 55,000 euro ($75,000) Austrian Frederick Kiesler Prize for Architecture and the Arts last year for exploring the link between the body and the spatial experience.

At the relatively young age of 46 — Frank Gehry was over 60 when he began designing his first museum, the Guggenheim in Bilbao, Spain — Rashid dreams of building a museum, and he’s patiently waiting for his moment. “Museums are our temples,” he says at his SoHo studio, smiling.

But Rashid’s ultimate project (which would put him in the company of Gehry and Wright, designer of the Guggenheim in Manhattan) might not be so far off. This year, Thomas Krens, the director of the Guggenheim and a fervent supporter of avant-garde artists, invited him to participate in a contest for the design of the museum’s Mexican branch in the city of Guadalajara (the capital of the state of Jalisco). The competition is tough: Rashid’s rivals, Jean Nouvel and Enrique Norton, are both experienced and established. Still, Krens says he strongly believes in Rashid’s talent.

“I made an investment in Hani as I did with other architects and artists, like Robert Rauschenberg, Matthew Barneys and Jeff Koons,” he explains.

The winning bid will be divulged Wednesday.

Asymptote’s plan for the Mexican Guggenheim is grandiose. The organically shaped building would stand on the edge of a cliff, creating a visual link between Guadalajara and the horizon with its smooth, curvy structure. Mostly made of glass, its high ceilings and wide galleries would receive a lot of light, merging with the surrounding environment. Rashid and Couture conceived the building with the help of cutting-edge computer programs that allowed them to view the building from all angles. The programs let them simulate the viewer’s experience in the space, connecting the different areas like cinematic frames.

It’s not a coincidence that Rashid, who was born in Cairo and grew up in the U.K. and Canada, has always been interested in cinema. As a child, he avidly consumed movies by the Seventies-era German director Rainer Werner Fassbinder and the members of the French New Wave, as well as art, literature and music. His father, Mahmoud Rashid, an Egyptian painter and set designer, taught him about the cultural heritage of ancient Egypt and took him to museums around the world. “Even when Hani was 10,” remembers his brother Karim, “he already wanted to build.”

Abandoning ambitions of becoming a filmmaker, Rashid went to architecture school at Carleton University in Ontario, where he explored the links between art and architecture. There, he fell in love with Couture, a fellow student who admired his work. While Couture studied with Frank Gehry at Yale for her master’s degree, Rashid attended the more radical Cranbrook Academy of Art, where Libeskind was teaching. Couture and Rashid then traveled to Milan, where they founded Asymptote before moving to New York.

When they’re not traveling or teaching, Rashid and Couture cook Italian and Greek dinners for their celebrity friends and their eight-year-old son, Tynan, who already has advanced conversations about architecture with his parents. Despite their hectic lifestyle, they’ve still found the time to sign contracts with furniture lines Alessi and Artemide, as well as design houses in Manhattan’s Chelsea neighborhood and in Connecticut; plan entire cities in Mexico and Malaysia, and go skiing in the Alps. And they’re still idealists: “I want to create a more enlightened and richer visual landscape. I don’t want to change the world, like my brother,” muses Rashid. “I just want to tweak it