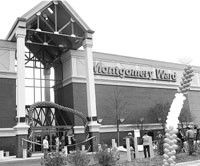 NEW YORK — Water, water, everywhere, nor any drop to drink.

The irony in Samuel Taylor Coleridge’s poem “The Rime of the Ancient Mariner” parallels a critical expansion issue facing many big-box retailers: space, space, everywhere, but still not enough good retail sites. Why?

Before trying to answer that question, it’s important to understand that when it comes to big-box retailing, the key issue isn’t how many more stores consumers really need or how many stores the industry can sustain. The key issue is one of proximity. Which is why the retail real estate mantra will always be location, location, location. Demographics are also critical.

Still, looking at the retail real estate picture shows there are a larger number of vacated retail sites. Moreover, there are sites that have been left empty for years. So, what’s going on here?

Peter Thorner of Tri-Artisan Partners, a merchant bank, said the “problem in retail is that a lot of the regional retailers have disappeared. The chains that had been looking for 80,000-square-foot boxes are not out there anymore. With Ames, Bradlees, Caldor and Hills all gone, you now have nearly 1,000 big boxes hanging out there. While Kohl’s and Target are opening stores, they’re also moving slowly.”

Thorner, once the chief executive of the now-defunct Bradlees discount chain, added that while Home Depot and Lowe’s are opening stores, they’re specific in their needs. These are retailers looking for sites with substantial parking space availability and a building size and format, such as very high ceilings, that allows for a different layout from what’s generally available.

Moreover, mall locations also are to blame. According to Thorner, “Sooner or later what happens if it is an old, tired mall, is that it sort of lingers until the landlord can entice somebody to buy out the remaining tenants and put in one big J.C. Penney or a Sears. Many of these malls also have usage restrictions where there can’t be a supermarket or a drugstore, so the empty store sits for a while.”

Richard Hastings, credit analyst at Bernard Sands, observed that the “problem with certain locations is that they become headaches for real estate investment trusts and property managers. Some are struggling with how to sell the entire strip shopping center or fill it out with other and better units when the anchor goes out of business. I have seen many instances of closed big boxes that have never been resolved and they’ve created blemishes in those shopping centers.”

Hastings noted that many of the older sites are in locations that leading retailers today no longer desire, which is one major reason why those empty stores are not filled. He pointed to the expansion strategies in the mid-Eighties, which fostered the type of growth that left many of these retailers defunct. Population densities have also changed shopping patterns. Newer communities often necessitate improved traffic flow, which makes commuting to work a breeze, but not necessarily shopping.

Because of these changes, the suburbs have “exploded” way beyond the conventional metro areas. Moreover, newer highways frequently foster easier and improved distribution access for retailers in the suburbs. Hastings cites a community called Mooresville, located north of Charlotte, N.C., which has become a major shopping destination. People are also commuting into Charlotte from increasingly further suburban locales. The impact of these changes is immediate.

“The older boxes out are of favor now because of newer, faster-growing communities. Recent housing starts in newer developments also are likely to have faster- growing populations. These are the areas where the big boxes are heading to for growth,” Hastings said.

“Usually what you get are cycles that last at least 10 to 15 years. If there are newer communities, then that will be where retailers start to look for new space. All you need is one or two to move in before the rest start to follow and then that will weaken the older locations. If the housing market begins to slow down, then you can expect big-box expansion into those locations to moderate,” the economist said.

Still, good locations frequently tend to remain ideal sites for retail, even if the nameplate on the facade undergoes periodic change. And those locations are the ones that are routinely the hardest to find.

Jeffrey Hornstein, managing director at the Peter J. Solomon Co., an investment bank, said, “When Kids ‘R’ Us liquidated, some of those stores went to Petco and some of the others went to Office Depot. In general, it is so hard for retailers to open big stores. It isn’t like the specialty business where there’s always plenty of space. You can easily find 3,000 square feet of space in a mall. Finding good 20,000 to 30,000 square footage is very tough. Then there are issues such as costs to build out or whether to be an anchor in a mall.”

He noted that retail bankruptcies can represent good opportunities for nameplates looking to expand as many then get to pick and choose the choicest of locations. “Kohl’s for example, built its whole New England strategy based on the bankruptcies of Bradlees and Caldor.”

Much of the activity involving retail space, according to Hornstein, centers on retailers buying bankrupt sites.

“If you want to open a store in Westchester [N.Y.] and it’s for a big box, you just try to find the space. [Chances are] it’s not there. Even supermarkets are having an impossible time finding locations to open stores. It takes years, so almost by default everyone is going after the bankrupt stores,” the investment banker observed.

He noted that while there may be certain areas where there are too many big boxes in the same area, the concept of the U.S. being over-stored may not necessarily apply to the big boxes.

“Given the activity that we saw in Kids ‘R’ Us,” Hornstein concluded, “it’s not like there were too many sites left sitting around. If anything, there’s probably not enough space [to meet] the demand out there.”

Adam Rogoff, a partner in the restructuring practice at the law firm Cadwalader, Wickersham & Taft, noted, “There’s a lot of appetite for great locations from chains looking to expand. The economy is such that those looking for opportunities are becoming more cautious, so when there are leases and properties up for grabs, decisions have to be made on whether the leases are at or below market, and whether there’s new development down the road that may be an even better choice.”

Rogoff, who spends much of his time on retail bankruptcies, said that in some instances store sites just stay dark for one reason or another.

He explained: “If an anchor is going down, maybe its a sign that other tenants will follow. I’ve seen some instances where the landlord purposely lets the space go dark so the site can be upgraded. If the spot is big enough, say when dealing with a 100,000-square-foot space, there may not be a whole lot of uses unless the landlord is willing to subdivide. One thing is certain, you won’t see a Target or Kohl’s open in a distressed mall.”

Emanuel Weintraub, apparel consultant of the firm that bears his name, observed, “If you head out to Paramus, N.J., you’ll see that the big boxes in major malls are occupied. While there are probably [other] major malls out there that have empty boxes, the majority that are dark are stores that are in strip malls.

“In one instance that I can think of, there was an abandoned supermarket, an A&P, in an area that can only support one or two. It was forced out by a new Grand Union two miles away and then the site was abandoned for two years. It is now a doctor’s office and there’s also a [variety] store. The building has been converted to an entirely different use. A lot of that is due to the imagination and daring of the real estate entrepreneur.”

As for the evolving landscape in retailing, Weintraub doesn’t expect to see any curtailing of what has been the big-box expansion boom.

“Most of the country is working, so people have money to spend. Are there enough consumer dollars to support all those stores? Yes. There is a continuing need for big-box retailers because of constant demographic changes and reconfiguration of stores,” he concluded.