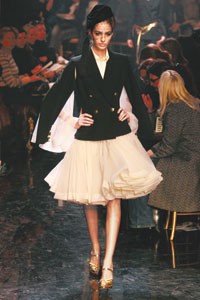 Jean Paul Gaultier: “Madame. Ritche [sic].” A white card bearing the scripted name sat on a gold settee at Jean Paul Gaultier’s headquarters on Wednesday, the site of the designer’s gorgeous couture show. Not surprisingly, it ignited a paparazzi firestorm well before Madonna arrived. Once she showed, the mayhem neared low-level violence while encapsulating the current paradox of haute couture: Its participants — both the houses and those who make up the audience — are increasingly confused and ambivalent as to what modern couture should be.

Despite some fabulous fashion moments this week, in its current state the couture season relegated to a scant three days is something of a snooze, prompting some observers to go all nostalgic for the frenzied atmosphere of a few years ago when Donatella roped in the celebrities to party till dawn and John Galliano showed his Dior against Broadway-worthy stage sets. Back then, of course, the complaints were about the whoring out of the hallowed couture to the mutual lusts for marketing and movie-star dazzle. But when things turned quiet — snap! — the boredom struck instantly.

The surprise lure of Madonna, whose upcoming tour costumes Gaultier is designing, exploded the season’s excitement quotient a million fold. As the audience and photographers got wind of it all, the anticipation bubbled over — hints of 2000! Unless you were seated near the center of the storm. As the possessed pack closed in on the places reserved for Madonna, an unnamed guest and Joachim Cortez, those sitting nearby feared for their safety. One cameraman told a seated guest that he would “do my best” not to draw blood with his equipment; a gentler sort, wielding a mike for Italian television, asked the woman for which magazine she and a colleague work. “If you say your names, I’ll send you flowers,” he offered. “I know this is bad.”

However one felt about the Madonna madness, the other show, the one on the runway, offered only reason for celebration. It was a dazzler in which Gaultier presented deft renderings of his chic signatures. Here were the tailoring, the grace, the embellishment, the mixes, the ethnic influences (Greece led the way this season), the encompassing Parisian aura, all delivered with near-perfect restraint. Gaultier flaunted his bravado with a suit in reed-thin skirt versions and a pinstriped classic with manageably wide pants. When he sought counterpoint, it was with a double-breasted black jacket over an exuberant organza shirtdress. Evening presented an intriguing duality as Gaultier either embellished lavishly with intricate flouncing and embroideries or manipulated a single fabric for textural interest by pleating, twisting or draping. Whatever one’s pleasure, the dresses were of a dream.

Gaultier’s finale was followed by that of Madame Ritchie. She exited down the grand marble staircase surrounded on three sides by her security and in front by the fleet-footed paparazzi walking backwards, her pale skin and glistening blonde hair radiant in the sea of black. The scene played like a cut from a film satire on celebrity culture. But then, at moments like this, cinema has nothing on cinéma verité.