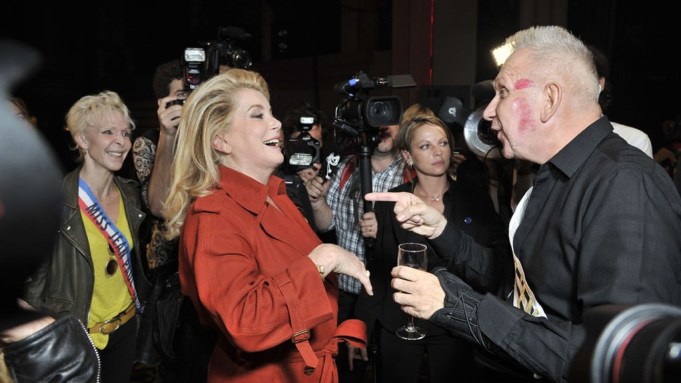 Catherine Deneuve: “I’ve known him for a long time and I like him a lot. I also admire him. He does things with extraordinary savoir-faire and always with a lot of imagination. It’s really wonderful to remain so young at heart.”

Alexander Wang: “I’ve grown up respecting and looking up to Gaultier. I’ve never been to one of his shows before, and I just felt like this was a very special moment, a sentimental moment. He’s always pushing the boundaries, pushing the pendulum, taking risks and that’s something that’s very admirable in this industry — and of course, such a great personality. And you can really tell that he’s passionate and has fun, and I love that about him.”

Farida Khelfa: “I think it’s marvelous to evolve the way Jean Paul is doing. I think we haven’t heard the last of him yet, and he is going to do many more interesting and powerful things.”

Alber Elbaz: “We’re one big family in fashion, not just collaborators. It’s an important moment for me to be here tonight for Jean Paul, for fashion, and for Paris. [He represents a] history of know-how and fun and rebellion and creativity, and all the best of fashion — daring and moving forward, pushing fashion and going to limits that sometimes we’re afraid to go to.”

Arianne Phillips, costume designer and stylist to Madonna: “I get emotional just talking about [it.] He’s the number-one inspiration for me, the reason why I have been inspired to pursue a career in fashion. He’s the ultimate provocateur and made me question everything that I believed fashion was — his relationship with androgyny, breaking the rules, and being a provocateur. Never in my wildest dreams would I ever imagine as an 18-year-old that I would have the pleasure to not only know him but to collaborate with him and Madonna. I’m also representing Madonna today, who’s really sorry she can’t be here.”

Walter Van Beirendonck: “I remember going to the first show of Gaultier and being totally mesmerized, because it was such a different take on fashion. We all snuck in, always. We made ourselves copies of the ticket. We did everything — there were no photocopying machines but we found ways to copy them and we went.

“It’s a pity that this is happening now. It’s another sign in the fashion world that things are changing. You saw that we lost a lot of creative people the last [few] years and that there is less respect for creativity and business is taking over. He is also the victim of that kind of system now.”

Francis Kurkdjian: “I think he made a great decision. It’s always good to choose the day you decide to leave. It’s always better that way.”

Nathalie Rykiel: “Fashion is a ruthless industry with extremely harsh economic laws, and one can only see this as a sign of the times. At the same time, where Jean Paul is concerned, what is fantastic is that he’s going to keep the instrument of haute couture, which probably affords him much more freedom and pleasure, and fewer constraints.”

Gareth Pugh: “It’s kind of the last show of an icon. It’s sad and it’s amazing, and I think he’s not going to go out without a bang, so it’ll be something to see, so I’m really happy and glad that I’m here. I grew up on ‘Eurotrash’ and he’s always been in my consciousness. He’s such an icon, so it’s nice to celebrate that tonight.”

Jean-Paul Goude (refuting the notion that this marked the end of an era): “I think it’s ridiculous to think in those terms. I don’t like it at all. I’m interested in people’s talent, not their career. The man simply continues to be extremely prolific — that’s all. The talent is there, and God knows there is talent, so everything is fine. He is probably going on to do even more interesting things.”