As Los Angeles gears up for its annual style frenzy, parties, previews and planning are going into overdrive. 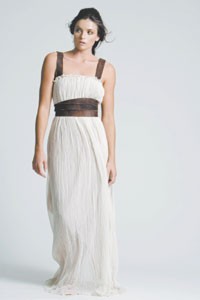 LOS ANGELES — Fashion Week here can be considered under way with the Gen Art Fresh Faces runway event on Friday, a required stop for on-the-verge talent each season.

More than 1,100 people will fill the Barker Hangar at Santa Monica Airport to see designers representing six women’s wear, one men’s wear, one swimwear and four accessories collections. This is the eighth year the nonprofit organization is presenting its Los Angeles showcase.

Editors, stylists, retailers and others in the fashion industry make the nominations and Gen Art picks the winners, giving newcomers a chance to show their lines.

As always, the offerings are as eclectic and reflective as the established industry from which they were hatched: from the softly tailored, deconstructed Hazel Brown to the jet-setting, contemporary loungewear of Geren Ford to the novel Fancy Ponyland.

On Monday night, this latest Gen Art dozen, including Undesigned’s Carol Young, sisters Nanette and Grace Sullano of Bon & Ging, Sophia Banks of S&J Shoes and Jeet Sohal of Brit Jeet, exhibited sketches at a cocktail party that drew some 150 supporters to the Viceroy Hotel in Santa Monica.

“We wanted to give these designers a chance to meet people, to network in a way they can’t Friday night when they end up backstage most of the time and it’s absolutely crazy,” said Lee Trimble, senior fashion manager, Gen Art L.A.

Mary Gehlhar, fashion director and vice president of Gen Art, came from New York to sign copies of her new book “The Fashion Designers Survival Guide” at the Monday night event — no doubt informative reading for even this talented class.