Ashleigh Verrier, Parsons School of Design, Class of 2004, was one of the lucky few. 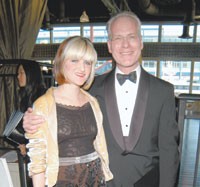 NEW YORK — Ashleigh Verrier, Parsons School of Design, Class of 2004, was one of the lucky few.

Verrier sold about 30 designs that constituted her senior thesis to Saks Fifth Avenue after she was named co-designer of the year at the annual Parsons student fashion show in 2004.

For fall her clothes hung near Marc Jacobs, Balenciaga and Chloe, and Saks ordered more for spring and fall 2005. She’s now working on spring 2006 and lining up funding for production costs for future seasons. Verrier is also selling to Nordstrom in San Francisco and Seattle, taking small deliberate steps forward.

“All of us imagine that the goal is to be a designer,” Verrier said. “I don’t know if I’m part of a trend of students starting their own labels or not wanting an entry-level position. I was raised by parents of the Baby Boom generation. The rearing I received encouraged independence.”

As new fashion school graduates hunt for jobs, the goal of becoming a designer is elusive. Some, out of school for a year or more, still search to find a dream job or an “angel” to back their collection.

Students at top institutions such as Parsons and the Fashion Institute of Technology in New York, Otis College of Art and Design in Los Angeles and, to a lesser degree, the Rhode Island School of Design in Providence, often have unrealistic expectations and are dismissive of the vast moderate sector of fashion populated by the Gap, J. Crew, Liz Claiborne and Kellwood Corp., college administrators said.

Their desire to be creative stars like FIT graduates Calvin Klein and Carolina Herrera and Parsons alums Donna Karan and Marc Jacobs has some of them rejecting entry-level jobs that could improve their pattern-making, draping and fit techniques. After an education that costs as much as $130,000, as is the case at Parsons, industry professionals said graduates have little idea of what a real design job entails and some still need to master basic skills such as sewing.

Parsons alumna Anna Sui is among those who lament the loss of dedication to training and paying dues.

“What strikes me is that they have a lessened appreciation for the craft behind design,” she said. “Everyone wants to be a designer but they don’t always understand that they have to also be a pattern-maker, a seamstress, a tailor, etc., to really build a successful business.”

Fashion educators like Timothy Gunn, chairman of the fashion design department at Parsons, said some students feel entitled to a design job.

“The pervasive attitude … is the desire to design right away,” he said. “I don’t support that idea. It’s a commonly held view and it’s not realistic. I say, ‘You guys should humble yourselves.'”

There are exceptions, of course. Young designers such as Zac Posen, Behnaz Sarafpour and Proenza Schouler’s Jack McCollough and Lazaro Hernandez have great talent and succeeded quickly.

Others, like Dave Tillet, decide to put off their dreams rather than settle.

Tillet, who won awards at FIT and was considered a rising star by his professors and peers, works in visual display at Saks Fifth Avenue in Palm Beach, Fla., and designs floral arrangements.

“This is better right now than working at J. Crew or Liz Claiborne,” he said. “I relate to high-end merchandise. If I worked in fashion I’d want to design for a high-end company. My real interest is in expensive eveningwear.”

Tillet in 2002 designed a mini collection that got some positive feedback from Joan Kaner, fashion director of Neiman Marcus, he said. “They wanted to see more. I ran out of money. I wanted to go out there on my own. It was going to be all or nothing. I even knew what the shopping bag for my collection was going to look like.”

Francesca Sterlacci, former chair of FIT’s fashion design department and now an associate professor, said 25 percent of students aspire to design under their own name and 50 percent want to work for a directional or cutting-edge company or one with designer price points.

“Those who feel like they’re over-the-top creative think they’ll get a job with the head designer or associate designer of a great collection,” Sterlacci said. “Then reality sets in. They find that the only job they can get is as a spec writer at Liz Claiborne.”

Freshmen at Otis also have big ambitions. “Almost all the kids who come here want to work for a big-name designer and they all absolutely want to have their own business,” said Rosemary Brantley, department chair. “Students aren’t thrilled about working for mass market companies. When they arrive the students want to be eveningwear and costume designers.”

After working with industry professionals, who serve as mentors, some Otis students change their views.

“Not many companies are doing jackets and tailoring on the West Coast,” Brantley said. “We’re so far away from Europe but we’re very close to the Far East. Working in California is about doing creative things with fabrics that are readily available. For the most part, our kids go straight into manufacturing.”

The Rhode Island School of Design’s geographical and psychological distance from Seventh Avenue may give students some perspective, said Mary Kawenski, department head of apparel design.

“RISD is an artistic community,” she explained. “Fashion students have friends in the glass, textile and industrial design programs. Someone from glass will make their buttons, for example. That adds a lot to our program. Just being so isolated might help.”

And yet, Kawenski said fashion design students don’t sign up for RISD’s fashion program with the goal of working at a mainstream company and doing mundane tasks. “I say, ‘Don’t think designers don’t hang tags on their clothes,'” she said. “Everybody chips in.”

Otis’ Brantley suggested that the attitudes of Parsons and FIT students may be a “New York disease.”

FIT’s Sterlacci said: “Before students start an internship you hear them talking. They say, ‘I’m going to work with so-and-so and I’m going to be designing.’ When they come back a lot of them are gofers and they’re appalled at what they have to do. Sometimes their passion to design supercedes reality or clouds it a little bit.”

Alexandra Robbins, who wrote the New York Times bestseller “Quarterlife Crisis: The Unique Challenges of Life in Your Twenties” about the trials of entering modern adulthood, said the attitude of fashion students is typical.

“We are a generation that grew up being told to dream big,” she said. “There is a sense of instant gratification because we were raised in the Internet age, which taught us to prioritize a faster-paced lifestyle.”

Parsons’ Gunn puts some of the blame on parents.

“They have become the worst enablers,” he said. “I’ve been in higher education for 26 years and I’ve never had to deal with parents on topics like grade appeals and not being selected for the fashion show. It’s just beyond the pale.”

Some students have even hired pattern-makers and seamstresses to sew their class assignments and final projects, and there is no effective way for educators to police them.

“People want to be stars overnight,” said Richard Lambertson, who with his partner John Truex designs the Lambertson Truex collection. “I worked in the fashion office of Bergdorf Goodman in the Eighties and then went to work for another designer for 10 years before I started on my own. Calvin Klein and Donna Karan paid their dues.”

Chris Benz, a 2004 Parsons graduate, may personify many grads.

“I don’t think fashion graduates should be stifled by menial duties,” he said. “During school when people were doing internships they felt they were getting their entry-level jobs out of the way.”

Benz took his time looking for the “right opportunity” after graduating. “Ideally, I’d like to work in a small company for a designer who’s not well established,” he said. “I know I can make a lot more cash working at Liz Claiborne or Gap, but now I’m setting my sights on the designer price point.”

He is freelancing at J. Crew and working on his own collection.

“A lot of people in school desperately want their own collections,” Benz said. “They get into a company and get on the track of working for someone else. I’m keeping my eye on the prize.”

Irma Zandl, a consultant specializing in the behavior and buying patterns of young people, said the industry itself, including fashion magazines and WWD, is hungry for the youngest, freshest talent.

“When the industry and its media praise these unschooled designers in such a noncritical manner it signals to young grads that tedious years of learning their craft is unnecessary,” she said.

Nadine Bourgeois, senior associate dean of Parsons, believes graduates are eager to put their education to practical use. “Fashion students learn to practice a trade as opposed to being an assistant,” she said. “They have the expectation of doing, as opposed to waiting another five years or going to graduate school.”

The reality is that moderate manufacturers and mainstream retailers, the types of companies many students shun, provide most Seventh Avenue jobs.

“J. Crew, Lands’ End and Ralph Lauren have come here to recruit,” FIT’s Sterlacci said. “One of the things they’ve told us … is that they’d like to see student portfolios geared more toward their products. Honestly, many students don’t want to work at the Gap.”

That leaves large companies with a limited pool of applicants.

“Finding people who can differentiate and develop something new and commercial is becoming more difficult,” said Hal Reiter, chief executive officer of Herbert Mines and Assoc., a search firm for fashion and retail. “If you have 4,000 stores you’ve got to have people who are commercially oriented.”

Stephen Ruzow, president of women’s sportswear at Kellwood Corp., avoids hiring students whose portfolios have an experimental bent. “We want to be dominant in the moderate market,” he said. “We look for people who can do mainstream design.”