Showing real clothes just comes naturally to some designers, while others are new converts to the notion this season. Then there are those for whom experimentation will always reign supreme. 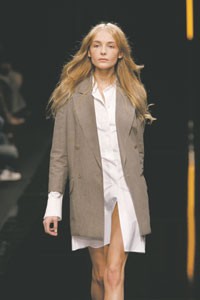 Showing real clothes just comes naturally to some designers, while others are new converts to the notion this season. Then there are those for whom experimentation will always reign supreme.

Christian Dior: Let’s get naked — er, nude. And let’s do it in high style courtesy of John Galliano, whose spring collection for Christian Dior both intrigued and confounded his audience. A merch fest of the sensual-chic sort, it was filled with beautiful clothes and a fab new slouched-up take on the saddle bag flaunted exit after exit. Yet it took the crowd by complete surprise, especially given the venue — the soaring, spectacularly renovated Grand Palais, a setting many thought would inspire Galliano to equally grand levels of theatrical splendor, all costumed ingeniously and referenced clear up to the cupola and beyond.

Instead Galliano stripped away all fancy, even down to plain hair and makeup, save for a few geometrically whitened eyelids, while building on a single reference from his elaborate July couture collection. That made for spare, nude-toned clothes overlaid with black lace and piping for corsetry outlines and various markings of construction. He worked the motif every which way, in dresses, coats, pants and even a trio of politely alluring two-piece swimsuits, digressing only ever so slightly to replace the black outlines with crystals or to allow the nude to amp up into shades of pink and orange. And because a girl must chase the chill somehow, Galliano countered the overall wispiness with sporty washed denims and a few voluminous leather coats. High evening was but a moment — swaths of chiffon and organza festooned and bunched seemingly at random, yet with the same ethereal calm as the day clothes.

It all made for a lovely, if low-key affair. And if some found it too much so from Galliano, conversion may be only a retail season away.

Lagerfeld Gallery: Karl Lagerfeld is in reevaluation mode. Last week, he established a dazzling new direction at Fendi, and on Wednesday morning, he laid out his creative blueprint for growth mode at Lagerfeld Gallery. In it, he made no-nonsense, unfettered clothes interesting by the well-placed flourish, as if he deliberately sought a mood of Yankee practicality laced with a soupçon of Continental chic. It should provide plenty to smile about in the Hilfiger camp — whatever happens there.

Lagerfeld focused on two key themes. Crisp white shirts came in every incarnation — as just plain shirts worn with pants or shorts; extended into dresses and cropped into neat jackets, sometimes trailing long streamers attached at strategic spots. The second motif centered on cutouts, neat circles, loops or teardrops cut into bodices, skirt hems and jacket closures. The lone embellishments on clean-cut silhouettes — even evening dresses were cut from sturdy daytime fabrics — made for a smart, accessible look, decorative but clean, a bit racy without vulgarity. Lagerfeld Gallery has been a collection on the verge for years. Now, given its bountiful resources and the designer’s nicely honed vision, it might be poised for real growth.

Comme des Garçons: With childlike pomp and fabric by the bolt, Rei Kawakubo gave her spring collection the royal treatment, approaching the lofty notions of imperial dressing. Her ceremonial costumes consisted of homemade crowns, naturally, Union Jack biker shorts and tops made from crisscrossing lengths of cloth as long as bed sheets wound round and round and round — like clots of fabric armor. A British flag peeped out from one built-in cocoon. Jackets built up around the shoulders with more looping action lent a tailored aspect to Kawakubo’s bulky beauty.

And there was no shortage of fabric in Kawakubo’s kingdom. Skirts were made from a mix of looping swags of plaid — tartans including Black Watch — tangy yards of Hawaiian prints and spliced-in camouflage.

For some, Kawakubo’s cheeky, off-kilter approach, with its ornamental bloat and wondrous wads, was royal, all right: It was the empress’ new clothes. For others, those among her most loyal subjects, Queen Rei and her high-minded fun reigned supreme.