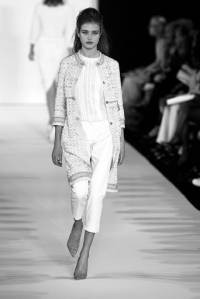 NEW YORK — The spring designer runway shows offered some of the most easily interpretable trends in recent memory and should quickly make an impression on lower-priced tiers.

Specifically, it was the more pulled-together ensembles of Paris and New York, such as the jacket and skirt sets at Chanel, and the colorful, feminine looks at shows like Marc Jacobs, Christian Dior and Narciso Rodriguez that are expected to trickle down from the designer level into the moderate, better and bridge sportswear arena — but not the obvious sexiness of super-short skirts or Eighties’ glam shown in Milan.

“This is not a challenging season, the clothes are flattering and that will make all the difference in the world to salability,” said David Wolfe, creative director of The Doneger Group, the New York-based buying office and consulting firm. “There’s also a big difference between femininity and sexuality, and the clothes we’re seeing on the runway are clothes we’ll be able to wear.”

Wolfe said the collections are just what retailers need to entice consumer spending come spring, crediting designers for the realistic approach they took this season.

“Clothes that we’re seeing on the runway are clothes we’ll be able to wear,” Wolfe noted. “That means companies will be able to knock off the high-designer messages without having to translate them so much. The moderate customer will really think she’s buying fashion because the gap between high fashion and moderate is closing.”

While skirts were super short in Paris, Kal Ruttenstein, senior vice president of fashion direction at Bloomingdale’s, said they will be an important trend next season.

“Short skirts were a major statement at all the Paris collections. I’m not saying that it’s for everyone, but knees will be exposed and legs will be longer,” Ruttenstein said. “Sometimes, a trend has to be exaggerated in the beginning for it to filter down. Not only Bloomingdale’s, but many stores, will go after shorter lengths, not as the only length, but as one length.”

Jones Apparel Group’s Mark Mendelson, president of merchandising at its career collection, said the season’s direction will be about dressed-up clothes, such as feminine tops with soft skirts.

“Our customer isn’t completely unaware of what’s going on, it just has to be relevant to her lifestyle,” Mendelson said. “Everyone from Donna Karan to Marc Jacobs and Narciso Rodriguez showed pretty, cleaned-up, dressy clothes. For spring, we’ve pushed up the blouse category and are featuring two-piece skirts with blouses. This woman needs clothes to go to work in and look stylish. So jackets are important, but it’s not a suit jacket. Rather, it’s a third piece so that she feels more put-together.”

Prints are the major trend from the runway that Nordstrom is pushing for spring, said Gina Tovar, fashion communications manager at Nordstrom.

“Our customers are ready for not just a single printed item, but a two-piece printed dress perhaps in a floral print,” Tovar said. “Also, we’re seeing a lot of beautiful color like icy pastels and item jackets. Overall, it’s a very approachable and understandable season, with great polished sportswear looks.”

Spring might be all about femininity, but Anne Cashill, director of corporate design and merchandising at Liz Claiborne Inc., said the company will translate that in a subtler way than the current ultra-feminine trend.

“While our heritage at Liz Claiborne has always had a feminine twist on things, we see a backing off of the overt femininity that has been prevalent over the last couple seasons, with the huge ruffled blouses and peasant tops,” Cashill said. “Even before the runway shows, when our designers were designing for spring, we were looking at the Forties and Fifties as inspiration, retro-Americana.”

Along those lines, “we’ll be using a lot of eyelet, lace as a trim, feminine and classic summer fabrics like gingham and seersucker, and lots of florals,” she said. “We also expect military-inspired jackets to wear to work, tunics, skinny, slim-leg pants and cargo pants to perform well.”

Citing many trends that will influence sportswear, Joan Kaner, senior vice president and fashion director at Neiman Marcus, said it will be a season of multiple trends. She highlighted the active-sport influence with zip-front jackets as seen at Chanel, cargo pants and skirts, as well as soft dresses and tops.

“There’s also lots of lingerie looks, from bustiers and camisoles with lace trim to slipdresses,” Kaner said. “It’s that kind of season where you can pick up a beautiful camisole, wear it with jeans or black pants and be of-the-moment.”

Kathy Bradley-Riley, merchandise manager for sportswear at Doneger, agreed: “One of the most interpretable themes or trends this spring is the whole utility feeling — cargo pockets and zippered details. The other thing that is happening is the whole feminine, romantic feeling with a lot of skirts and novelty skirts, uneven hemlines and skirts with tiers, for example. The season overall means more skirts, more prints and woven shirts, more little novel jackets and a good amount of tunics being shown.”

“The overriding trend is feminine clothing, glamorous, but not quite as bohemian,” Burke said. “There’s a big interest in color — creams and pinks and light colors were quite strong. On the whole, one important trend as a silhouette is the skirt and dress, and it makes sense as it fits into the whole femininity idea.

“We’ll see these trends in the bridge and secondary lines and they are well-defined and easily understood. It’s a very promising season for retail, but not necessarily one I would classify as conservative. It’s very novel, one-of-a-kind signature items.”