Rebecca Danenberg is making her second bid in three years to return to the apparel industry, this time with a premium denim label called Work Custom Shop. 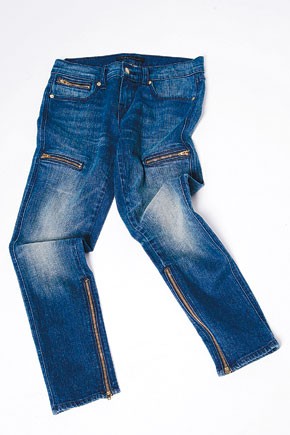 NEW YORK — Rebecca Danenberg is making her second bid in three years to return to the apparel industry, this time with a premium denim label called Work Custom Shop.

Danenberg, who made a name for herself in the Nineties with an edgy namesake sportswear label, has had first-hand experience with the difficulties of getting new lines off the ground. The New York native shuttered her signature line and declared bankruptcy in 2000 before moving to Los Angeles to work for then-burgeoning premium denim label Seven For All Mankind. In 2002, while still working for Seven, Danenberg announced plans to restart her sportswear line, an effort that was later abandoned at the urging of Seven. In 2005, Danenberg left Seven and partnered with a new financial backer to launch the Three Girls Running contemporary line.

“I’m trying to get out of the five-pocket syndrome,” Danenberg said at the time. “I like creating a whole line.”

However, Danenberg was unaware that another company owned the rights to the Three Girls name. That, combined with operational difficulties, forced the project to fold after two seasons.

Danenberg thinks her latest venture will gain traction because of a new silent partner she believes can better support the business and a solid concept behind the brand. Work Custom Shop will bring Danenberg back to the premium denim arena, and she hopes to recapture the energy and style she found in Seven For All Mankind’s early days.

“The concept is very slick, clean, modern and edgy,” she said. “When I was at Seven in the beginning, we had a philosophy like that. I think they went off in another direction now, so I wanted to continue what I did at Seven but evolve it.”

The line’s inspiration came from an existing store in Los Angeles’ Echo Park founded by two artists and musicians who offered custom jeans. The store’s name, naturally, was Work Custom Shop. Danenberg and her backers purchased the store and decided to create a brand around the concept. Although she is focusing on establishing the bottoms business, Danenberg will look to extend the custom concept to new product categories.

“The concept I think is great for anything really, like shirts and T-shirts,” she said. “People are being more careful about spending, so they want something that will last.”

The line, which is projected to do $2 million in first-year sales, uses Japanese and Italian denim and covers a broad range of styles and silhouettes in an effort to give the line a custom feel. The line has skinny, straight and flared-leg styles, as well as fashion pieces like a sailor pant and a twisted leg seam.

“I think that’s the direction for fall, more workwear styles,” she said.

Washes will remain largely clean and dark. Wholesale prices will range from $78 to $91. The line will begin selling this month at retailers such as Fred Segal, American Rag, Lisa Kline and Tracey Ross in Los Angeles.