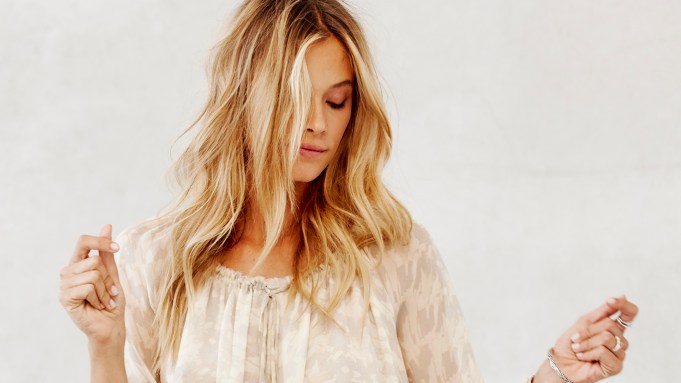 Before her wedding in the summer of 2010, Rebecca Hessel Cohen — then the senior fashion and beauty editor of Cosmopolitan Magazine, where she worked for seven-and-a-half years — decided on a whim to make her own bridesmaids dresses. She couldn’t have possibly predicted that the DIY design experiment would eventually result in the launch of her two-and-a-half-year-old contemporary brand, LoveShackFancy.

But the bridesmaids dresses, as it turned out, were a hit. “They were these beautiful, ethereal halter gowns in silk chiffon. I worked with a pattern-maker in the Garment District,” Cohen explained. “You could twist and tie it to make it super-low or empire-waisted. I made them for fun, but everyone wanted those dresses.”

They were also multipurpose and great for travel: well after her wedding, Cohen would pack a few of the dresses into her suitcase while trekking to location shoots for Cosmopolitan’s fashion editorials. “Makeup artists on-set would be like, ‘Can you make me a top similar to that dress?’ So I made six or seven styles and I started selling them on the side and making a little money,” she said. “I knew nothing about business, though.”

The positive reception inspired confidence, and Cohen left Cosmopolitan in 2012 to become a freelance stylist, allowing more time to focus on her designs. While in Los Angeles for a photo shoot, Cohen brought some dress samples to The Globe Showroom. The team there suggested she put together a capsule collection, and LoveShackFancy officially launched in May 2013.

The label, produced in New York, Los Angeles and India, initially comprised hand-dyed maxidresses, ruffled miniskirts and embroidered silk tops. Cohen has since broadened the range of fabrics to include hand-dyed and printed cottons, crochet, and velvet, enabling her to sell at a lower price point. As a result, LoveShackFancy has experienced triple-digit-percent increases in wholesale, and the recent resort 2016 collection will be newly stocked in Barneys New York and Intermix. For fall, Cohen will develop more knitwear in Peru, as well as heavier linens, beaded embellishments and new embroideries.

Still, the line continues to evolve while staying true to its bohemian, summery, Seventies-inspired roots. “I take all of my inspirations from travels, and it’s very heavily inspired by vintage now,” Cohen said. “We have some eyelet embroidery that’s a little Seventies, folk-inspired. Any textured white is my favorite thing — whether it’s Victorian or Seventies crochet. It’s about those timeless, go-to pieces that are great for traveling….It’s feminine, but girls mix it up and put their own spin on it.”

And Cohen still makes those bridesmaids dresses. “We call them the fancy dresses now,” she said. “We do a few styles that girls can customize or buy straight off the rack. I would say we do 12 or so weddings a year.”

LoveShackFancy ranges from $125 to $595 and counts Saks Fifth Avenue, Elyse Walker, ShopBop and Revolve among its stockists, in addition to its own e-commerce site.