By Lisa Lockwood and Roxanne Robinson on February 13, 2016
View Slideshow 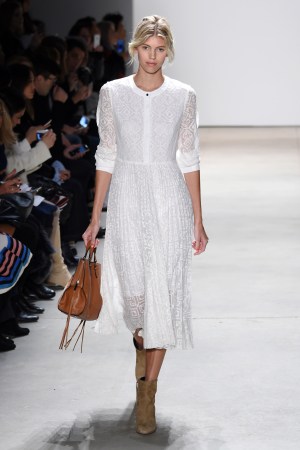 The great consumer-show experiment has begun.

This story first appeared in the February 15, 2016 issue of WWD. Subscribe Today.

Minkoff representatives stood on the stairway of The Gallery at Skylight Clarkson Sq, holding large cardboard signs with guests’ names, so VIP clients and contest winners could be identified and ushered in. Some seemed confused about tickets and scanning once they were let in and given seat assignments.

Retailers, such as Bloomingdale’s, Saks Fifth Avenue, Neiman Marcus, Nordstrom and Shopbop — as well as Minkoff’s freestanding stores in New York, Los Angeles and San Francisco and her Web site — invited top customers to attend. A few retailers held in-store events the same day to pamper their customers. Bloomingdale’s, for example, invited six women to the store in the morning, including its Snapchat sweepstakes winner Shelby Clark, a Fashion Institute of Technology junior, to check out the spring clothes and get their hair and makeup done. After the show, they headed backstage to greet Minkoff and take a selfie with her.

“The whole concept feels so fresh and modern and the clothing is available at the store right now. This is where our minds are right now,” said Brooke Jaffe, operating vice president of fashion direction for women’s ready-to-wear at Bloomingdale’s, who was seated in the front row. She said the women seated in the rows behind her “are among our best customers.”

Bloomingdale’s invited Sheila Levine, her niece Alyssa Levine and their friend Nicole Katz, who said they often go shopping for bags together and are fans of the brand. In fact, they said their Saturday sport is “bag shopping.”  They said all their friends tend to buy the bags, and they have a large collection themselves, with their favorite being the small cross-body style.

For most people at the #SeeBuyWear show there was understandably a “Groundhog Day” effect on the runway. Industry attendees have been working with this collection since last September, either styling for fashion shoots or viewing it in merchandising and buying meetings. To freshen up the clothes for that purpose — as well as appease the day’s target, the customer — Minkoff added 17 new pieces to the runway show, in addition to the styles delivered from January through April, for a total of 31 looks.

“I wanted to give her pieces she was excited about and can go into her wardrobe right now,” said the designer. That was evident as the looks were styled as consumer-friendly and safe — nothing screamed runway only. The fresh pieces were all on trend and included a long pleated skirt, flowy wrap dresses, tie-neck blouses, a lavender and navy suede boxy cut cropped jacket and cropped pants. Minkoff also updated her bag collection with a group of patchwork styles in leather and suede.

The company reported that stores each brought about six to 10 people, and media partners, such as Refinery 29, Who What Wear, Polyvore, Cosmopolitan (online and print) and InStyle, invited guests. Editors from Harper’s Bazaar, People Style Watch, Glamour and InStyle, were also spotted in the audience.

Minkoff revealed the in-season, consumer-focused show in December and the following day, the Council of Fashion Designers of America said it had retained the Boston Consulting Group to conduct a feasibility study of consumer shows. Those results will be out in March, and in the meantime the momentum has been building. Brands such as Burberry, Tom Ford and Tommy Hilfiger have all said they will have direct-to-consumer fashion shows in the fall. Diane von Furstenberg also planned to include a consumer capsule in her Sunday  fashion show that’s available to purchase immediately.

Ken Downing, senior vice president, fashion director of Neiman Marcus, who’s been a big proponent of recalibrating the fashion schedule, said, “This is our big test.” He also noted that it’s a misnomer calling it consumer-facing. “We want to tighten the gap between the frenzy of the show and the delivery of the goods in store,” Downing said. He said the mystique associated with the fashion industry will return once brands resume showing their collections to a smaller industry audience in their showrooms. “Right now the fashion industry is an open book,” said Downing, noting that film companies don’t release all the information about their movies so far in advance. “We show too much too soon, and we need to keep something close to the vest,” he said.

Customers were energized by the access to the designer and by seeing the clothes on a runway.

Denise Arruba, a hairdresser from Los Angeles, said, “I thought it was amazing. I’m a top client from Rebecca Minkoff’s L.A. store. I liked everything.” She said she buys the clothes, the handbags and the shoes. She particularly loved the long, maxidresses.

Bonnie Goldberg, a top Saks customer, came to the fashion show with her daughter, Lindsay, who’s a marketing manager. “I thought it was great,” said the mother. “They sent cars.” She said she saw a lot on the runway that she was interested in buying. “I think you’re more inclined to buy things when you see them first-hand,” she said. Her daughter added, “I loved it. It was fantastic. It was my first fashion show. I loved how she combined the suede with the fringe. I also loved her cape and a lot of her outerwear.”

Karen Dong, a devoted Shopbop customer, said she ignored the first e-mail she received because she thought it was a scam. Someone called her cell phone from the Shopbop marketing department, and she still thought it was fishy and said no again. She even told them, “I never take a limo” when they offered it. They called her again and convinced her to attend.

“I have more bags than anyone else. I’ve been carrying her Morning After bag for five years,” said Alison McLoud, a huge Minkoff fan. She, too, was a first-time show-goer. She said she likes Minkoff’s “simple style and good colors.”

Natalia Vlasova, a New Jersey resident who described Minkoff’s line as “cozy, feminine and nice,” was also invited to attend by Shopbop. “I guess we spent too much money at Shopbop,” she said. “It’s worth it.”