Moses' exhibition "Imperfectly Perfect" celebrates individuality in a vibrant display of art and fashion shown on her new collection of mannequins for Ralph Pucci International. 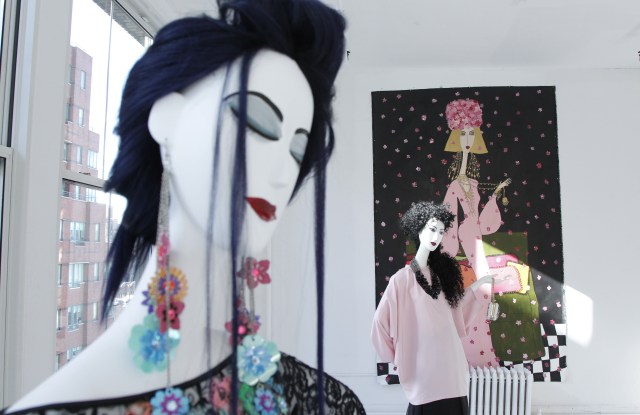 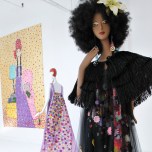 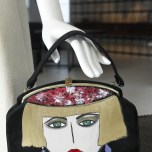 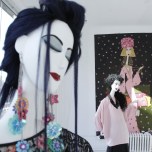 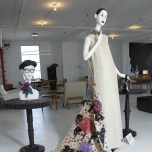 Consider the gauntlet thrown. It’s as chic and provocative as an 11-button glove, and plenty joyful. It comes via “Imperfectly Perfect,” an exhibition by Rebecca Moses opening tonight at Ralph Pucci International, a cross-disciplinary wonder of illustration, one-off fashion and accessories and a glam contingent of mannequins who shatter current norms with their outrageous style. Just as the real-life models of the social media generation — Karlie, Gigi, Kendall — have, by force of their own powerful personalities, shoved aside the blandly pretty girls who walked (but never ruled) the runways in the Aughts, these fiberglass fashion girls make today’s standard minimalist genre look more store dummy than dynamic presence.

“It’s Rebecca’s world,” said Pucci last week over a lunch at local haunt, Basta Pasta, following a walk-through of the almost fully installed show, an afternoon’s pleasure that included Moses, stylist Freddie Leiba and publicist Lou Iacovelli. “She proposed it to me. I just felt the timing was right. Everyone in retail is saying you have to be different, you have to step away from what everyone else is doing, but no one’s doing it.”

Moses approached the show as a celebration of women and the visual idiosyncrasies — both genetic and cultivated via personal style — that make us who we are. Hence the show’s title; these ladies are fabulous but flawed, perhaps with a crooked nose, off-center chin, or neck too this or that. Moses’ original plan was to use her artwork as a backdrop for the undressed mannequins, which she designed in collaboration with Pucci’s longtime sculptor, Michael Evert. But almost immediately, that felt wrong. “These girls aren’t naked kind of girls; these are fashionistas,” she determined. “They’re about their hair and their makeup and the accouterments.” They had to be dressed.

Moses quickly rethought the show as a gallery opening in itself, her vibrant illustrations of women covering the walls in small-scale portraits; floor-to-ceiling fashion illustration and a vast mural. Coming off the elevator, guests are greeted by a series depicting imaginary women for whom Moses has created back stories. “Rose — born in Liverpool. Came from a working-class family. Grew up in flea markets, second-hand shops. She was going to make it all work for her.” “Crystal — part African-American, part Irish. She’s got her beautiful ‘fro and light skin, and people always wonder what she is. She hates when people asks. She says, ‘I’m me.’”

That, Moses said, is the ultimate message behind the show, a manifestation of a message all woman should embrace: “I am undefinable. Undefinable and indescribable.”

Arriving at the main gallery requires walking past an unrelated installation of work by some of the furniture designers Pucci represents. Once there, the open, pristine white space allows Moses’ colorful creations to pop. Twenty-nine mannequins populate the fete, some standing alone in appreciation of a canvas, others, in conversational clusters. One wears a column in a burlaplike fabric from Pucci’s upholstery collection, its elaborately hand-painted train detachable at the shoulders for pragmatic purposes. Another “girl” works a longer train dotted with multicolor blossoms reflective of a subtle theme of “snowing flowers” that runs throughout. Another wears a lavishly appliquéd black coat. Moses made all of the clothes and jewelry and most of the handbags, save for some vintage pieces. Either way, she turned each into a one-off hand-painted gem.

But then, differentiation is the point. With mutual friend Nicole Fischelis playing matchmaker, about a year ago Moses approached Pucci with an idea for a show that would feature unusual mannequins. They would look individual, with “perfectly imperfect” beauty. She reasoned that the fake people positioned around stores whose “job” it is to entice women to shop should look, if not like real women (we should all be so lucky), then at least reflect real-life diversity. The mannequins come in several poses, with various skin tones and hair styles, some painted on, some wigs, as well as very different facial features. Moses chose not to carve the eyes, but to paint them on, allowing latitude for various shapes; one of the heads has an off-kilter chin.

“I had to figure a way to find a voice for fashion. I want to bring art to fashion right now,” Moses said. “If people want [a fully dressed mannequin] for their home, if they want to wear the clothes, there are no rules anymore. We’re in an unknown territory now.”

For his part, while Pucci will sell a dressed mannequin to an eccentric collective, that’s not his primary objective. He’s looking for major retailers to sign on in a new way, breaking away from the status quo of store forms that are “all flat white or flat black, including mine. Very chic, but I’ve been doing that for 10 years.”

Might these girls have too much personality to work as the clothes change from season to season? “Am I anticipating some stores to say, wow, this is fabulous but it’s a little too much?” he mused. “Yes, because they’re so used to doing the same thing over and over and over. What we need is one store to do it, one store to do a ‘wow’ with it. We’ll see others want to do it.”

Moses maintained that retail embrace of her concept requires a shift in perception, from seeing mannequins as neutral clothes hangers to representatives of the real women who will buy and wear fashion. Within each one’s distinctive look, she noted the flexibility to repaint eyes and change wigs. “If retailers don’t differentiate themselves, they will not have a story to tell,” she said. “If they don’t have a story to tell, they will not be retailers [for long].”

Enter the prudent publicist with perspective. “Especially if they’re going to bring in the selfie generation,” Iacovelli offered. “It’s all about who they follow, and they follow themselves. So they need to walk in [to a store] and say, ‘hey, that’s my coloring,’ and ‘she’s got freckles like me.’ They’re about themselves. It’s not about how it was before — you’ve got to look like Twiggy or Cheryl Tiegs or whatever. Those days are long gone.”

Not gone (thank God): fashion’s ability to telegraph joy. Whether or not you’re in the market for mannequins, drop by the Pucci Gallery by Dec. 13 to experience Moses’ imperfectly perfect world. You’ll leave smiling. And maybe, a little more forgiving of your off-kilter chin.