Red Carpet at the 2009 Emmy Awards

Red carpet looks from the 2009 Emmy Awards in Los Angeles. 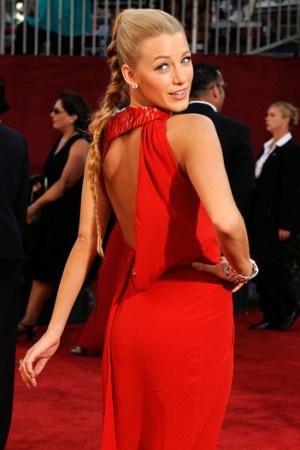 The heat was on at the 61st Primetime Emmy Awards Sunday evening — literally. Even the coolest of stars couldn’t help but comment on the sweltering conditions as they made their way down the red carpet.

“My best accessories are this fan and my water,” said Rose Byrne, holding one of the handheld fans being handed out on the carpet.

Others weren’t quite as graceful in describing how they felt. “It’s so hot I can’t think straight,” exclaimed Sally Field.

“I’m pretty distracted by all the sweat,” admitted Mila Kunis. “In fact, it’s just pouring down my back.”

At least the women had the option of showing skin: the men surely had it worse in their tuxedos.

Thankfully actresses used a variety of tactics to manage the high temperatures.

Some eschewed the normally ubiquitous black in favor of lighter hues, like January Jones in a cream Versace gown and Ginnifer Goodwin in a purple Yves Saint Laurent number.

“I’ve been making more of an effort to wear color and this dress just jumped out at me,” said Jennifer Morrison in pink Calvin Klein Collection.

Others turned to cut-outs as a source of built-in ventilation: Olivia Wilde posed for pics in a barely there Marchesa dress fresh off the runway.

“I feel like a cross between a wood nymph, Grace Kelly and a ballerina from ‘Swan Lake,’” she said. “But most of all I feel good because I have windows built into my dress.”

Of course, in the end, sometimes just making it to the ceremony at the Nokia Theatre L.A. Live is achievement enough. Will Arnett took full blame for his tardy appearance with wife Amy Poehler.

Check out the Pre- and Post-Emmy Parties: