Red Carpet Fashion at the Emmys 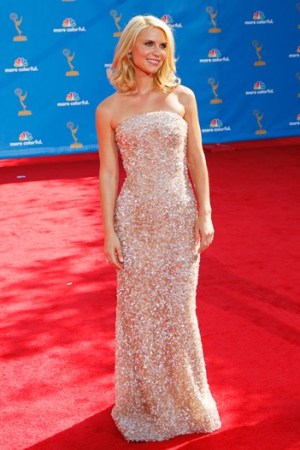 The 62nd Annual Primetime Emmy Awards at the Nokia Theatre in Los Angeles Sunday night provided plenty of fashion drama — and some comedy — as stars paraded down the red carpet in drapy goddess dresses, mermaid sheaths and princess ball gowns.

“Hey, you look crazy good!” shouted “Mad Men” creator Matthew Weiner as he walked by, interrupting one of her interviews.

“Are we getting an award?” joked Tom Hanks as he strolled in with minutes to spare before the curtain call. Not this year, but wife Rita Wilson’s chandelierlike Prada dress could have been a contender for best comedy. Newlyweds Stephen Moyer and Paquin garnered the most cheers from onlookers, as “Glee” newbie Amber Riley sighed, “I’m not here to meet anyone, I’m here to gawk.”