The artist-producer will be the new face of Reebok Classics. 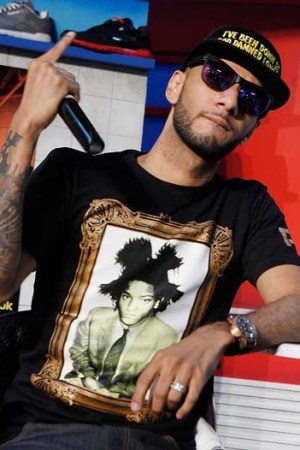 LAS VEGAS — It’s been a good week for Swizz Beatz.

Fresh off his Grammy win with Jay-Z for “On to the Next One” on Sunday night, the artist-producer unveiled a collaboration with Reebok designed to breathe new life into the company’s Reebok Classics brand.

During a press conference at its Project show booth here late Tuesday, Reebok said Beatz, who is married to singer Alicia Keys, will help develop sneakers and apparel for holiday and will lend his street cred to the brand beginning immediately.

In fact, Beatz tweeted a link to a hip-hop-themed video of him wearing an updated version of the Classics sneaker right before he stepped onstage for the press conference. This prompted Todd Krinsky, global head of the Classics brand, to shake his head and say: “Swizz is always two steps ahead.”

Krinsky said when Reebok Classics was introduced it was “a key fabric of street culture; every kid had a pair. But they got away from that.” To reverse the trend, Reebok has created a new logo, and will soon introduce a new marketing campaign and fresh product in addition to its collaboration with Beatz.

“This is not a sneaker deal,” Krinsky said. “Swizz will be involved in the campaign.” Beatz, who unveiled the first product in the line, the Kamikaze model, said he’s eager to “make the world know that Reebok has a new voice.”

Krinsky said a “tight collection of apparel” and higher-end sneakers will make their debut for holiday and roll out during 2012. Distribution will include boutiques and select urban retailers. Shoes will retail for $75 to $150, with the higher prices for limited edition models. The apparel is still being worked on, he added, but will be a lifestyle collection rather than a performance line.