As the runway shows at L.A. Fashion Week move into high gear, a band of outsiders is tweaking scripts, meeting with Hollywood hopefuls and raising boom mics - all in an effort to enhance their fashion brands on film. 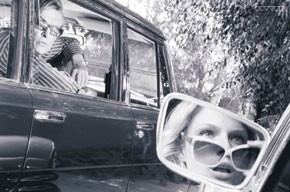 LOS ANGELES — As the runway shows at L.A. Fashion Week move into high gear, a band of outsiders is tweaking scripts, meeting with Hollywood hopefuls and raising boom mics — all in an effort to enhance their fashion brands on film. Alfonso Campos is one of those filmmakers. Besides serving as ceo of Tarina Tarantino, the accessories firm named for his pink-tressed wife, Campos wrote and directed a 20-part miniseries called “The Intern,” starring Dominik García-Lorido (daughter of actor Andy Garcia) about an aspiring designer learning the craft at Tarantino. Campos also is concocting a 30-minute piece he described as a “jewelry-heist love story.”

Sitting in his downtown Los Angeles office, crammed with studio lights and boxes labeled “hair clips,” Campos noted that he and Tarantino started their company in 1996 with plans to make a film about his father’s childhood in Nicaragua. As Tarantino’s candy-bright crystal accessories fueled a successful business with freestanding shops here and in Milan, however, film projects took a back seat until two years ago, when Campos wrote and directed a lighthearted short called “Hollywoodwonderland,” with Illeana Douglas as a Monica Vitti-like diva. Last year, he directed AFI singer Davey Havok and Internet personality Jeffree Star in “Tokyo Hardcore,” a bizarre love triangle involving a rocker named Tommy Jet, his android girlfriend and a transvestite groupie. Douglas and Havok, like many who collaborate with Campos, are friends who work gratis. Nevertheless, top billing always goes to the accessories.

“It’s just a new way of marketing, rather than being obvious with paid advertising,” said Campos, who oversees a staff of three at a production unit, Fuchsia Revolution, housed within his company. “A moving image to me is more powerful than a photo on a page.”

While filmmakers and fashion houses have been interacting at least since 1931, when Samuel Goldwyn first hired Coco Chanel as a consultant, the number of shorts made specifically to promote brands has increased recently. In 2006, for instance, Mike Figgis directed Kate Moss to seduce her mirror reflection in a black-and-white Agent Provocateur series called “The Four Dreams of Miss X.” This year, Prada took a colorful flight of fancy in “Trembled Blossoms,” an animated short about a wood nymph who charms bugs and fish to morph into psychedelic sandals and handbags from the fashion house’s current spring collection.

For L.A. Fashion Week, local label Wren outfitted Sonic Youth bassist Kim Gordon, socialite Arden Wohl and indie band Bat for Lashes in a short video, which will premiere tonight at the Taylor De Cordoba Gallery. After her fall runway show in New York, Erin Fetherston cast Zooey Deschanel in a short film called “A Dreamy Wander,” directed by photographer Ellen von Unwerth. Featuring a cameo of the designer along with the fall collection, “A Dreamy Wander” debuted Friday. Von Unwerth previously directed Kirsten Dunst wearing Fetherston and tinkering with a toy piano in “Wendybird.” “I have so many layers of inspiration,” said Fetherston, noting that she plans to continue creating films because “it gives me a chance to tell more of that story than a catwalk presentation.”

Why have more designers turned to movie-making? Simple: technology. With the proliferation of broadcasts on the likes of YouTube, Current and Buzznet, it’s now relatively easy to distribute minifilms to a global audience. The crowding of print ads in magazines and the advent of TiVo also have inspired companies to seek alternative marketing methods.

In the case of Oliver Peoples, the photographer of its current resort-spring ad campaign, Sinisha Nisevic, happened to make films as well. During the shooting of behind-the-scenes footage for the campaign — featuring legendary producer Robert Evans and B-list blonde Kate Nauta, whose biggest prior acting gig was in the action flick “Transporter 2” — the West Hollywood-based company realized it had the makings of an entertaining trailer. After adding zippy dialogue (“I was dumb with a capital D,” Evans intoned in his wise-guy voice) and a climactic scene of the blonde having a nervous breakdown in a bedroom, the result was an 80-second commercial steeped in Evans’ trademark film-noir style.

Some Los Angeles designers, however, cite cost as the main obstacle to their cinematic fantasies. Erik Hart of Morphine Generation said that the eight-minute opus he created with cinematographer Ross Richardson and a director who goes by the pseudonym of Psychtrance Ltd. would normally have cost $125,000. Hosting a runway show in New York would have been half that, he added. Through creative bartering with the models, the makeup artist and crew and a promise to feed everyone, the short, about a fictitious band called the Dark Harts, was shot one January day in an abandoned Rolls-Royce mechanic shop for $5,000.

“In the right hands, shooting on film can give a whole new dimension and dynamic to the clothing,” said Richardson, whose credits include Web movies for David Yurman and BCBG Max Azria.

Compared with a runway presentation, Hart said, “There is much more emotion in a more cohesive manner in a short amount of time.”

Then, too, there’s also an opportunity for designers to ham it up on camera. In the final scene of the dialogue-free “Hollywoodwonderland,” for example, after credits have rolled to a peppy lounge tune by Bruno Nicolai, Campos, Tarantino and Douglas contemplate their work.

“I thought it was excellent. What do you think?” Campos asks the women.

“I think it’s great. We have a real film here,” Douglas replies.

Tarantino gives them both a smirk, rolls her eyes and walks into the sunset.