PARIS — Rei Kawakubo made a rare public appearance here Monday to attend a press conference about the upcoming exhibition of her designs at the Metropolitan Museum of Art’s Costume Institute.

The institution’s first monographic show of a living designer since the Yves Saint Laurent exhibition in 1983, “Rei Kawakubo/Comme des Garçons: Art of the In-Between” is set to run from May 4 to Sept. 4.

Adrian Joffe, chief executive officer of Comme des Garçons and Kawakubo’s husband, leaned over to whisper into her ear as she listened intently to a short presentation by Carrie Rebora Barratt, deputy director of the Metropolitan Museum, and Andrew Bolton, curator in charge of The Costume Institute.

“Rei has blurred the art-fashion divide with creations that often look like sculptures, challenging us to think anew about fashion’s place in contemporary culture,” said Barratt. “Our thematic show will examine the way in which Rei’s work pushes the boundaries of dress design, challenges traditional notions of beauty and creates a new aesthetic vocabulary.”

Describing the exhibition as “unlike anything we have ever done at the museum,” Barratt said it would feature a maze of geometric shapes dotted with 150 mannequins wearing Kawakubo’s designs from 1981 to the present. Julien d’Ys, who creates the hairstyles for CdG’s shows, is designing the headpieces for the exhibition.

Bolton described Kawakubo as the most important and influential designer of her era, comparable in stature to Saint Laurent in the early Eighties.

“Since her Paris debut in 1981, Rei has consistently defined and redefined the aesthetics of our time. Season after season, she changes our eye by upending received notions of conventional beauty and by disrupting the defining characteristics of the fashionable body,” he said. 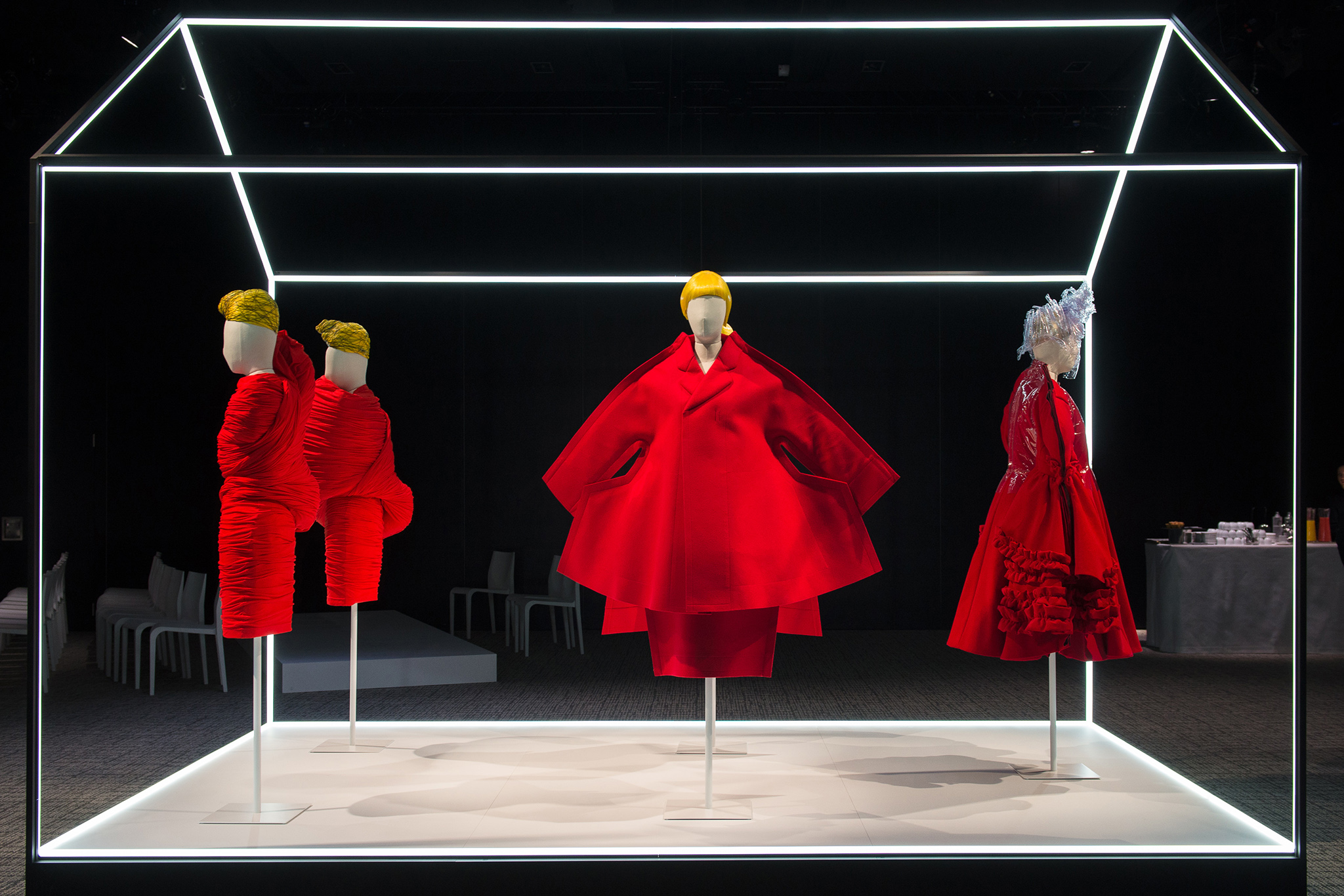 Bolton made several references to Kawakubo’s famously elusive public persona, noting that the designer typically refuses to explain her collections, instead providing just a short title for each one.

“Unlike the titles many artists give their work, usually to clarify their meaning, those Rei gives seem to obfuscate meaning. At best, they serve as a code to be deciphered, at worst, they serve as a red herring, designed to divert, distract and ultimately, bewilder,” he noted.

The Fashion/Antifashion section of the exhibition will focus on CdG’s collections from the early Eighties, which shocked critics with their black color palette and outsize shapes. Model/Multiple will explore the concept of repetition with 34 skirts from the label’s spring 2004 Abstract Excellence collection.

The Object/Subject will feature Kawakubo’s notorious spring 1997 collection, Body Meets Dress, Dress Meets Body, of which two examples were displayed as part of an installation at the press conference venue, just off Place Vendôme, where Comme des Garçons has its Paris headquarters. The padded garments in stretch nylon caused a scandal when they were first shown.

“References to tumors and hunchbacks abounded in reviews of the collection, which critics christened Lumps and Bumps, a moniker that suggest a body that’s diseased, deformed and ultimately, monstrous,” said Bolton.

The final section, Clothes/Not Clothes, focuses on the Japanese designer’s last eight collections, in which the clothes have become entirely divorced from their utilitarian function to cross over into the realm of art.

“The garments featured in Clothes/Not Clothes share qualities with sculpture as well as conceptual and performance artworks,” Bolton remarked.

The Met’s Costume Institute Benefit, also known as the Met Gala, will take place on May 1. Gisele Bündchen and Tom Brady will join the previously revealed cochairs of the event: Katy Perry, Pharrell Williams and Anna Wintour, who was present at Monday’s press conference.

Kawakubo and Caroline Kennedy, the former U.S. ambassador to Japan, will serve as honorary chairs. The event is The Costume Institute’s main source of annual funding for exhibitions, publications, acquisitions and capital improvements.

The exhibition and benefit will be supported by Apple for the second year in a row, as well as by longtime sponsor Condé Nast and Farfetch, H&M, Maison Valentino and Warner Bros.

The Japanese designer behind the Comme des Garçons label and Dover Street Market specialty stores, Kawakubo is a fashion maverick whose Paris fashion shows remain a highlight for the international retail and design community.