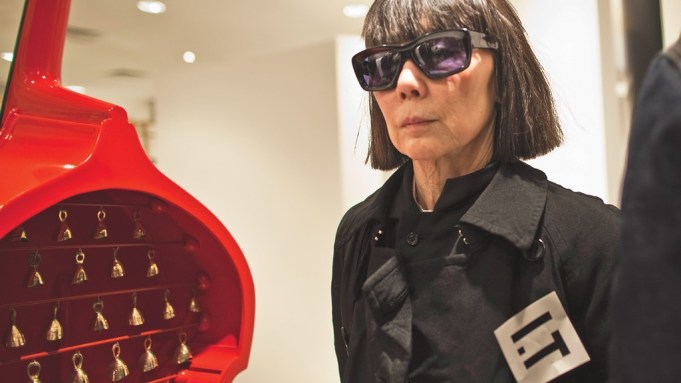 Rei Kawakubo needed only one word to describe her spring 2013 collection, whose dense agglomeration of clothes was difficult to dissect and describe. Hoarding, recycling and today’s remix culture came to mind watching her models parade in their John Chamberlain-esque hats of squashed tin, canvas dresses steamrolled around their bodies, or simply anchored in bunches by thick straps around the bosom.

Making a fashion writer’s job easy is hardly her cup of tea, and it’s almost enough to make her smile.

“The more people that are afraid when they see new creation, the happier I am,” she relates in a manner as blunt as her bobbed hair.

Kawakubo’s latest collection for Comme des Garçons was of the confounding ilk—another rebel yell from a lone wolf in a forest of tame fashions.

A few days after her show, staged in a chilly concrete parking garage on the eastern fringe of Paris, the Japanese designer turned 70, a milestone she prefers not to acknowledge. Answering questions through her husband, Adrian Joffe, who is also chief executive officer of Comme des Garçons International, Kawakubo let a birthday-related query pass without an answer.

She prefers to let her clothes do most of the talking, and they are doing a splendid job, showing Kawakubo at the height of her powers after more than four decades of creation.

Her acclaimed fall 2012 collection, which took her two words to describe: “two dimensions,” was on display in all its flat, felted glory by plenty of showgoers in Paris, and her designer peers are still raving about it to this day. Kawakubo also continues to experiment and dare with her unorthodox retail stores and collaborations, with a New York branch of Dover Street Market among her next projects.

Here, she shares a few of her pointed opinions on her creative intentions, skewering fashion magazines and corporate greed along the way.

WWD: You often say your mission is to create clothes that never existed. Do you ever feel you are exhausting the possibilities?
Rei Kawakubo: “As the weight of experience piles up, it has become increasingly difficult to find yet new ways of thinking and to make new things.”

WWD: Are your collections personal—about what you want to wear, or how you are feeling? Where does the impulse come from?
R.K.: “My intention is not to make clothes. My head would be too restricted if I only thought about making clothes.”

WWD: Was “Crush” any commentary on your flat, two-dimensional fall collection? Or did the idea come from somewhere else?
R.K.: “I can honestly never remember clearly what I was thinking about at the time. I was only trying to make something completely new. There is never more meaning than that. I was not thinking about the age of Internet when I was making the fall-winter 2012 collection.”

WWD: Surely it’s not possible to produce a collection like “Crush” by sketching. Do you always drape, always sketch, a combo of the two, or some other approach?
R.K.: “Yes, you’re right. I made this collection on a table, and worked on the clothes like a sculptor would work on a sculpture. It was all made by hand.”

WWD: If you could have invented one garment, what would it be, and why?
R.K.: “I would have liked to invent the plain white shirt, with a skirt and pants to go with it.”

WWD: Fashion today seems to be more about big business and profits than pure creative expression. Do you agree, and if so, how do you feel about it?
R.K.: “Yes, it’s true.…And it’s weakening the power of creation. This is the worst of situations.”

WWD: You helped popularize design collaborations. Is it still a stimulating and fruitful path for you?
R.K.: “I am always thinking that some interesting possibility, some accidental synergy could occur in a collaboration, and people seem to like it. Even though it is difficult, it is easier for me to make my own things, by myself.”

WWD: You’ve also become a global, multibrand retailer with Dover Street Market. Has this shaped your approach to design?
R.K.: “I run a business as well, so we need ways to grow and develop, but this has not changed the way I approach design in any way whatsoever. My sense of values has not wavered since I founded the company 43 years ago.”

WWD: Do you ever worry about designing a collection that won’t sell, or that is difficult to sell?
R.K.:  “Every day I think about the selling, but when doing a collection, all I want is for people to feel the power.”

Designers are a competitive bunch, yet Rei Kawakubo is an equalizer, one of the most admired and vaunted among her peers.

“That was the most amazing show I’ve ever seen from anyone—ever!” agrees Marc Jacobs. “I just think she has an extraordinarily unique vision and voice,” adds Jacobs, who often wears Comme des Garçons skirts. “I wear the clothes. I don’t just look at it as design for the sake of design.”

Jacobs marvels that Kawakubo’s collections—as varied as they are—have a strong handwriting: grafting clothes onto clothes, or using clothes to create other clothes, for example. “There’s always something different and new, but there’s always a common thread, too,” he says. “It’s not about dressing for other people. It’s not buying clothes to attract or seduce. It feels like a gift you give yourself.”

“Rei is like a compass,” enthuses Celine designer Phoebe Philo..“She is tuned into some deep sense of where we are today. I don’t always understand it, but I get the feeling that she is right to be there anyway. On days where I feel tired or flat, her universe always gives me the fight to continue.”