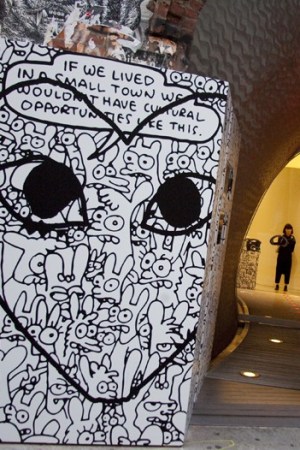 There are certain things one has come to expect of Comme des Garçons’ Rei Kawakubo. Her hair will always be bluntly cut in a pageboy coiffure. She’ll never wave hello at the end of her runway shows. And she doesn’t do personal appearances.

So guests at Saturday night’s party were in for a surprise. Not only was “The Simpsons” creator Matt Groening at her Manhattan store to celebrate their T-shirt and tote collaboration, “Binky & Sheba PLAY,” but Kawakubo was there too, clad in black from her epaulette leather jacket to her sequin sneakers. She played the perfect yin to his yang. A jovial Groening chatted up guests, posing for endless pictures, while Kawakubo quietly darted around, speaking only to a few people here and there — largely through her husband and company chief executive officer Adrian Joffe — and avoided the shutterbugs all together. Of the collaboration’s numerous worldwide launches (the festivities kicked off last Wednesday in Paris and will close on May 27 in Beijing and Shanghai), New York is the only stop at which both players made an appearance. “How often do you get to see her, do you know what I mean?” said attendee Phillip Lim. “When I heard she was coming, I was a little skeptical about it. But I don’t need an excuse to come here. I’m a fan and a client.”

For those counting, it’s actually been six years since Kawakubo touched down here. “She’s been wanting to come to New York for a long time,” Joffe explained, speaking for the designer. “She wanted to see the shop and see the staff.” And, judging by her three-day itinerary, she wanted to squeeze in some sightseeing too. Among her stops: the Alexander McQueen exhibit at the Metropolitan Museum of Art, Spanish eatery Casa Mono by Gramercy Park and the downtown streets of SoHo, Tribeca and the Lower East Side — not to mention Atlantic Avenue in Brooklyn. “We went all over,” Joffe said. “There are some good, cool stores on Atlantic Avenue. We didn’t go to any flea markets. We don’t like flea markets.”

As for the “Binky & Sheba PLAY” collection — based on Groening’s weekly “Life in Hell” comic strip — Joffe noted that the cartoonist and Kawakubo met through Groening’s wife Agustina Picasso, who’s one-third of the Argentinian artist collective Mondongo along with Manuel Mendanha and Juliana Laffitte. Back in 2008, Kawakubo held a Mondongo exhibit at her Dover Street Market store in London. Not surprisingly, she didn’t attend the opening, but Joffe did and it was here that he first met Groening.

Fast-forward to November 2010: Picasso and Groening visited Tokyo and had tea with Kawakubo and Joffe. But how the collaboration went from there depends on whom you ask. The Comme des Garçons’ ceo thinks the partnership was initially Picasso’s suggestion, but Groening firmly remembers it being Kawakubo’s. “She knew specifically what she wanted,” he recalled. “She said, ‘No, no, not ‘The Simpsons,’ ‘Life in Hell.’ I was quite gratified by that because ‘Life in Hell’ is my underground stuff. It’s very personal.” The comic strip, which began in 1977, centers on an angsty rabbit named Binky, his ex-girlfriend Sheba and a whole host of characters — all of which make appearances in the Comme des Garçons’ casual Play collection. Groening noted that he simply handed over his drawings and Kawakubo did the rest. “I was thrilled with how she treated them almost like hieroglyphics,” he added.

Does this mean Kawakubo relates more to the cynical, neurotic Binky than the beehive-sporting Marge? Not really. Joffe notes that Groening fully owns the rights to “Life in Hell,” as opposed to the other cartoons, which made the process easier. Besides, he remarked, “she doesn’t watch TV, never mind ‘The Simpsons.’”

As to whether the camera-shy designer will one day make a cameo on the long-running FOX sitcom, Joffe says no. However, Groening’s response varies here too. “It’s possible, yes,” he replied. “Anytime anybody comes into our world, we add them to the long list.”