Age is just a number for 24-year-old cheesemonger Zoe Brickley. 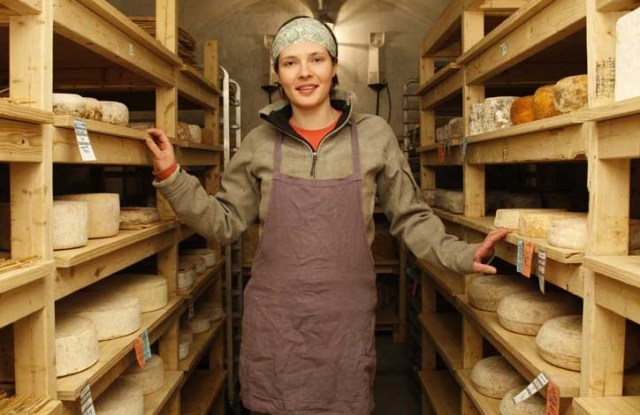 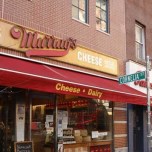 Age is just a number for 24-year-old cheesemonger Zoe Brickley.

Paris’ Montparnasse has its Catacombs, and Rome, its Tullianum, but neither offers a subterranean experience as mouthwatering as the caves of New York’s revered cheese shop, Murray’s.

Twenty feet below the sidewalk of its original store on Bleecker Street in Greenwich Village, you’ll find everything from nutty, brined Appenzellers to wheels of bright orange Mimolettes, all quietly aging to perfection. It’s the kind of realm that might be lorded over by a salty, sexagenarian Frenchman, drawing on decades of experience as an affineur (a sort of cheese caretaker, skilled in aging and production) to ensure that every cheese is sold à point (the state at which it’s best to eat). But instead, at Murray’s, affinage is the sole responsibility of Zoe Brickley, an unassuming 24-year-old from Indiana who looks more like the babysitter next door.

And, as it turns out, babysitting is actually a large part of affinage, says Brickley, an alumna of New York’s French Culinary Institute, where she graduated first in her class in 2006. “You take care of their every need until they’re ready to go home with someone,” she explains maternally, as a nearby intern brushes the mold off a small aging wheel of cheese.

Brickley started out at Murray’s soon after graduation working the retail counter, but her lifelong interests in the environment, the culture of food and agriculture helped her quickly ascend to her current role. “I wrote my undergraduate thesis on organic farming,” she explains.

In addition to her jurisdiction over the four vaulted caves—each with different temperature and humidity settings—Brickley is part of Murray’s buying team, visiting farms and establishing relationships with cheesemakers. However, most of her time is spent underground, where the work is anything but easy. Quality cheese is high-maintenance, not to mention heavy: Some Parmesans in the cellar weigh up to 90 pounds. Brickley seems to have an encyclopedic knowledge of cheese, stopping to point out the concave edge of a particularly large wheel: “It was originally shaped that way so it could be strapped to an animal for transport to market,” she points out.

Her fresh face and organic look are completely disarming, and that approachability meshes well with the overall philosophy at Murray’s. “We want it to be a place where people who don’t know much about cheese feel comfortable coming in and learning,” says Brickley, who also leads three educational courses offered by the shop, including Cheese U. Still, people do get hung up on her age. “Sometimes I’ll be giving a tour of the caves or teaching a class and someone will stop me,” she says. “They’ll demand, ‘Who are you? Where do you come from? How do you know so much about this?’”

Being one of the city’s few affineurs presents certain social challenges, as well. “I usually don’t like to discuss my job when I first meet people,” Brickley explains. “It’s pretty obscure. I just tell them I’m an inventory manager.”