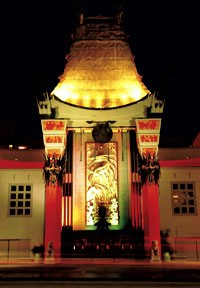 HOLLYWOOD — Shaul Kuba wants to restore the glamour to Hollywood Boulevard and get rid of its seedier elements.

His real estate company, CIM Group, recently snapped up the 2 1/2-year-old Hollywood & Highland shopping complex from Trizec Properties Inc. for $201 million, taking a big initial step to try to push out the cheap tourist and stripper shops that are as numerous on the boulevard as stars are on the Walk of Fame.

“We started buying up properties in Hollywood six years ago, before [Hollywood & Highland] started construction,” said Kuba, the Israeli-born principal and co-founder of CIM, during an interview. “We have targeted that market as one where we can make a difference. We have millions of dollars invested. We really understand what is going on. It’s our home.”

CIM, an urban real estate fund based here that has $676 million in equity, finalized the purchase from Trizec in February — an impressive package that includes 387,000 square feet of retail, Grauman’s Chinese Theater and the 637-room Renaissance Hollywood Hotel. CIM has subsequently announced it will sink more than $20 million into upgrading the property.

Kuba sees apparel retail as integral to the revival of the complex, which would benefit the city of Hollywood as well, he added.

Trizec may have succeeded in bringing the Academy Awards to the Kodak Theatre in the complex and sparked some increased activity and interest around Hollywood. However, in the years since the unveiling of the complex in November 2001, sales have been disappointing. Between 18 million and 20 million tourists are showing up annually, but they haven’t been spending much, certainly not enough to reach the project’s $500-per-square-foot goal for first-year sales.

In 2002, Trizec reported sales of $294 per square foot on an annualized basis. In 2003, that number improved 10 percent, to $320, according to analysts, but still never matched the competition. For example, The Grove, another shopping center that’s generated strong appeal, opened a few months after Hollywood & Highland and is less than five miles away, just off Fairfax Avenue. Stores in The Grove have reportedly been racking up between $600 and $800 in annual sales per square foot.

Although Hollywood & Highland does provide a decent selection of stores, among them Sephora, Gap, Bebe, Oakley and DFS Galleria, critics have characterized the complex as an architectural albatross. A frequent target of criticism is the Babylon Court, a reproduction of the spectacular set design of D.W. Griffith’s 1916 epic “Intolerance,” replete with rearing elephants and Art Deco Egyptian themes framing the famous Hollywood sign that looms in the distance.

Kuba brushes this off. “Everything works in L.A.,” he said, claiming that some clothing retailers in the complex are currently reaching sales of between $400 and $800 a square foot. He declined to identify them. “I think everybody got [upset that] it didn’t work the first day. OK, so big deal.” If the Beverly Center works, despite being in need of significant updating itself, he suggested, Hollywood & Highland will work too. “It’s just a matter of time,” he said. Beverly Center is about a 20-minute drive southwest from Hollywood & Highland.

Among the improvements Kuba expects to make at Hollywood & Highland include the addition of more escalators, a revamp of the Babylon Court and bringing in several retail tenants to help attract more of the local community, specifically apparel retailers. Retailers topping Kuba’s wish list include BCBG Max Azria, Lucky Brand Dungarees and Chico’s.

“Women’s apparel and cosmetic categories are doing very well” at the complex, Kuba said. “We want to build on that. We want to be able to say to people in Hollywood, ‘You don’t have to drive to the next mall over. You can just [buy] it here.’”

The focus on apparel retailing is a strategy that has proven successful in CIM’s other high-profile projects in California — Santa Monica’s Third Street Promenade, San Diego’s Gaslamp Quarter and Old Pasadena. These are all major Main Street-type shopping districts that many retailers consider mandatory addresses.

Kuba is very encouraged by the demographics in the Hollywood area. There are about 160,000 people residing within a two-mile radius of Hollywood & Highland, making it a far denser neighborhood compared to Old Pasadena, with 96,000 people in the same radius, and Santa Monica, which counts 82,000 people in the same radius. Target has proved that the Hollywood crowd has money to spend. When the retailer opened its doors on the corner of Santa Monica Boulevard and La Brea Avenue on March 3, the store racked up $500,000 for the day, according to real estate insiders.

In addition to Hollywood & Highland, CIM owns seven other properties, ranging from residential to retail and office space, that are all currently being redeveloped, for a full plate of construction and renovation activity in various stages. The Galaxy building, a block west of Hollywood & Highland, and an adjacent building, both owned by CIM, will be beefed up with new retail tenants and a health club, Kuba said.

Also in the portfolio:

“We are trying to control our own destiny,” said Kuba. For him, it’s a matter of having an idea of an area’s potential and buying a few properties there, and then investing further to improve the real estate, he suggested.

Soon, CIM will bite into another difficult area, this one in downtown Los Angeles. Kuba plans to break ground on South Village this year, a $247 million project in the former Southern California Gas Co. building at 800 South Flower Street. CIM plans to transform the building into residential lofts by 2005. A Ralphs supermarket and 10,000 square feet of retail space will follow.

In this part of downtown L.A., Kuba is again pinning his hopes on fashion, and is specifically hoping to appeal to students from nearby design schools, including the Fashion Institute of Design and Merchandising and the Otis College of Art & Design. The hope is that some of the students will one day open their own stores there.

“It’s not going to be Banana Republic or Gap that’s going to make this cool right now,” Kuba said. “It’s going to be some young designers looking to open shops. To the extent we can get some of that, we would love it.”