Friends and family were joined by fashion and media titans at the Church of the Ascension in Manhattan on Monday morning to celebrate and remember the legacy of John B. Fairchild.

By Rosemary Feitelberg
with contributions from Lisa Lockwood
on April 27, 2015
View Slideshow 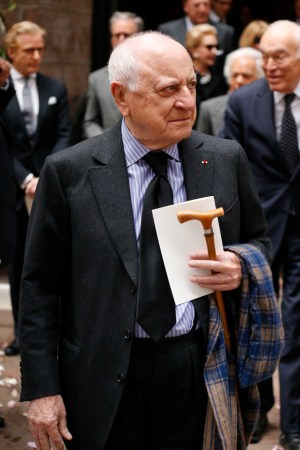 NEW YORK – Designers, editors, former colleagues and family members turned out in force at Monday’s memorial service for John B. Fairchild, former chairman and editorial director of Fairchild Publications, at the Church of the Ascension at Fifth Avenue and 10th Street here.

In his 30-plus years as head of Fairchild Publications, more specifically as publisher of Women’s Wear Daily and founder of W magazine, Fairchild transformed how fashion was covered and essentially reinvented celebrity journalism. He died Feb. 27 at the age of 87.

Pierre Bergé, Leonard Lauder and other speakers recalled Fairchild’s indelible impact on the fashion industry, and how he single-handedly made designers household names. They also spoke of an unfailingly unpretentious man with a limitless curiosity, ironic gaze and wicked wit.

Bergé, who first met Fairchild in 1958 and befriended him four years later when Yves Saint Laurent launched his first collection, said, “Long before others, John knew how to mix fashion designers and celebrities: He knew that they leaned on each other, and needed one another. I speak of a bygone era, when talent and creativity were considered more important than marketing. An era when vision and inspiration in fashion were respected and admired.”

Lauder also first got to know Fairchild around that time, shortly after he had returned from WWD’s Paris bureau. Lauder said, “He set out to change our world in a way that will never be the same.…Many people don’t realize how John changed the way people thought and looked. He was the Bard of the 1960s, the Seventies and the Eighties.”

Seismic as that shift became, Fairchild made sure to have plenty of laughs along the way, maintaining a certain mischievousness and playfulness that some suggested has since vanished from the New York media scene. To wit, Lauder rifled through Fairchild’s fondness for nicknames — or what he described as “Fairchildisms”: La Grenouille was “The Frog Pond,” its back room “The Catsup Room,” and the more self-explanatory “Ladies Who Lunch,” “Jackie O.,” “The Beautiful People,” “The Cat Pack,” “Fashion Victims” [aka “The FVs”] and “The Walkers.” Fairchild dubbed Lady Byrd Johnson “Her Efficiency” and Princess Margaret “Her Dreary.”

Lauder also noted that “someone John didn’t love” was known as “The Social Moth.” He reminded the crowd how Fairchild once captioned a photo of three people with “So and so, and so and so,” airbrushing out the face of the third person, who happened to be a European designer.

After readings by his sons John, James and Stephen, Fairchild’s only daughter Jill in her eulogy described her father as a “Francophile, an Anglophile, but in actuality, a true American.” He was also a “devoted husband who worshipped his beloved wife, a steadfast father who was always there, a publishing tycoon who changed the fashion world forever.” She said, “Was he perfect? Not even close, but for me, he was my shining star and the most treasured man in my universe. Truth be told, my father taught me everything….and the most important thing he taught me was to seize the day — every day — and to never miss an opportunity. ‘Don’t waltz around life,’ he told me, ‘Live it.’”

Some in the crowd may have not known of how he reveled in telling others about his Newark, N.J., roots, or that his Princeton studies were interrupted by a stint in the U.S. Army, where he literally was a model for a recruiting poster. Then there was the unfortunate tale of the four Fairchild children, the eldest son John’s BB gun and their father’s prized Porsche Targa. She also drew many laughs, remembering his disdain for her ordering mayonnaise in restaurants and for fish, which he called “poison.” She continued, “Imagine dressing for my father….It was like getting my very own personal fashion review and rarely favorable. ‘Jill, what on earth are you wearing?’ That was his way of telling me never to wear that again.”

Jet-set as he was (Fairchild invented the term after all) with homes in Gstaad, and Nantucket, the fashion insider was a perennial family man, who even caved in to the Christmas spirit by dressing as a full-on Santa Claus for his grandchildren each year.

Fittingly, even the memorial’s location, the Church of the Ascension, had a backstory beyond its being the first church on Fifth Avenue, one of the first designed by Richard Upjohn or its impressive John La Farge relief and stained glass windows. Fairchild’s father Louis had served as an officer of the Church of the Ascension, and his mother Gertrude had also been active in the parish.

Afterward, many lingered beneath the church’s dogwood trees to catch up, reminisce and consider Fairchild’s undeniable influence, fiercely competitive spirit and eternal playfulness. Perhaps he himself best described his quest, as Fallon quoted Fairchild having said, “I have always dreamed of starting a publication called simply FUN. How do others enjoy themselves? I suppose FUN has something to do with lifestyle (although I hate that word). The only way I can explain my idea of fun is to talk about myself. Then it gets boring when one talks about oneself, so I can only have fun talking about other people. They are really the only ones that give joy to our lives, and without these friends and the others around us we would be a sad lot indeed.

“So here goes. Let’s try and have some fun together, as we travel here and there through a lucky and colorful life. But I am not going to dissect myself like I have others simply because that would be boring. I might have a big ego, but I don’t like using the word ‘I’ so let’s avoid any type of autobiography. Instead we can jump all over the place without a beginning and I hope without an end for a little while.”

Fallon continued, “He was asked for the centenary issue of WWD how he would best sum up his tenure at the paper. His answer was a straightforward one: ‘We had fun.’

“And it is that simple word, made up of two consonants and a vowel, that captures why he is missed so much: ‘Fun. We had fun.’ Yes, Mr. Fairchild, we did.”

And in the process, he furthered many careers. Bergé said, “John’s unfailing friendship was a pillar of strength to us. It is in no small part thanks to him that the collection was an immediate success.” he said. “His talent enabled him to transform a professional journal into one read by a broader public. It became the holy book of fashion. John’s judgments were irrevocable and final. He could engender or demolish a reputation.”

Adolfo agreed, saying afterward, “He was really magnificent. He knew exactly what fashion was all about. I always had the feeling that after he left, things changed.”

Wang too was a Fairchild fan. She said, “John Fairchild revolutionized fashion, fashion reporting and social media. He brought wit, guts, taste, a wicked sense of humor and an insider’s view of our culture. He was, is and will always be an icon to us all.”

Donna Karan said, “He made fashion real, and now it’s unreal. There is no fashion without him. He was fashion. Nobody else can take his place. It’s impossible. He was one of a kind.”

Describing how he and Badgley were just out of Parsons when they first encountered Fairchild, Mischka said, “We were so aware of him and how he brought society and fashion together. He really forged that bond.”

Mischka added, “He definitely struck fear in the heart of mortal men. We were too naive to be scared of him or maybe not shrewd enough to be scared. If he liked you or believed in you, it was the best thing in the world. if he didn’t like you, you feared for your life.”

“It was exciting, as it should be, full of the big stuff,” said Ingrid Sischy, leaving the service. “It was this incredible mixture of humanity and work. You really understood why Women’s Wear mattered so much to him. He wanted to get the scoop and create a fashion community, even if he pissed everybody off. He wanted to create the fun that’s missing today. The emphasis on personal passion might be the end of an era.”