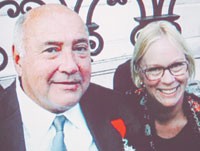 NEW YORK — With his silvery Nike sneakers displayed at the front of the Carnegie Hall stage, Bloomingdale’s Kalman Ruttenstein was remembered at a memorial service Wednesday for his love of fashion, eye for new talent and style.

The store’s senior vice president of fashion direction died Dec. 8 at the age of 69.

“Kal’s destiny was to be a teacher, a mentor, a tutor, and, oh, how he succeeded,” said Michael Gould, Bloomingdale’s chairman and chief executive. “He taught us to never stop being open to new ideas. He taught us that each of us can have vision, passion and integrity. Kal taught us that to see the unseen is a necessary discipline to be a great merchant.”

Ruttenstein was considered by many to be the nation’s most influential fashion director, and was a fixture at fashion shows and in showrooms. Designers said the spectacle of the runway won’t be the same without him sitting in the front row.

Even after he suffered a severe stroke a decade ago, they said Ruttenstein never let up. He maintained his pride and his determination to cover the collections, to create exclusive shops and merchandise that tied in with Broadway and Hollywood and brought a special dimension to Bloomingdale’s.

“It was inspiring. He never lost his enthusiasm,” said Ralph Lauren. When preparing for the start of a fashion show, if Ruttenstein had not yet arrived, “My response was always, without hesitation, we’re not starting until Kal gets here,” Lauren said.

“He touched the lives of many people,” said Ruttenstein’s assistant for 35 years, Sibyl Piccone, one of those eulogizing Ruttenstein, whom everybody called “Kal.”

“He was demanding, a perfectionist and quick to criticize, but just as quick to recognize a job well done,” Piccone said. “We laughed. We fought. I feel so fortunate to have spent almost my entire working life as his assistant and I will miss him terribly.”

Next to fashion, food was his second love. “Kal had an unfilled ambition: He really wanted to be a restaurant reporter for the International Herald Tribune,” joked Suzy Menkes, the paper’s fashion editor. “He was really beatific with his smile — a smile of pure heavenly joy, when he said, ‘I am going to take you to the hottest place.’ The place was Balthazar and never mind when we got there that we could not hear a word we said.”

“His sense of approval helped me believe I was on my way,” said Marc Jacobs, whom Ruttenstein nurtured. “He was the man — completely in touch with what was happening everywhere.

“Kal was like the Energizer Bunny — he just didn’t stop,” added Jacobs, who recalled how honored he was when Ruttenstein asked him to design a Bloomingdale’s bag. “He would be the first backstage after a show and he would always say, ‘We have to do windows.’

“I remember going to visit him in the hospital and he had a transgender nurse who he kept telling me I should use as a model in my show. ‘She looks just like Linda Evangelista, don’t you think?’ he said.”

Chantal Rousseau, a Bloomingdale’s vice president based in Europe, said, “Kal’s passion for fashion was grounded in the reality of commerce,” while his close longtime friend Kenny Karlstein noted that Ruttenstein was the one always picking up the tab. “He celebrated what was new and young and made it hip and hop … He was a fine fountain pen in an e-mail world and he bridged the gap beautifully.”

Charles Chapin, a roommate at Princeton and longtime friend, said Ruttenstein, an English major, had “a lifelong ability to create an enormous soufflé of words out of thin batter.” When Ruttenstein served in the military at Fort Dix, N.J., he was voted cook of the week and stirred Jell-O with a canoe paddle, Chapin recalled. “He had a true love of people” and always stayed connected to those he loved.

Chapin remembered once going with Ruttenstein to one of New York’s hottest restaurants and, as they left, they were met by two attractive young women who began squealing, “Oh, my God: Kal Ruttenstein the legend.” They kept going on and on about the genius of the fashion director, said Chapin, “to the point where I thought it was getting a bit thick. But when we left, Kal turned to me and said, ‘That’s what I live for.'”

Daphne Rubin-Vega took time out from her rehearsals for “Bernarda Alba,” a musical at Lincoln Center previewing in February, to sing “Without You,” a song from “Rent,” which Ruttenstein saw 30 times. When she finished, she bent over and sentimentally clutched Ruttenstein’s sneakers. Also performing were The Princeton Footnotes.

Donna Karan said Ruttenstein convinced her to abandon a weekend at the beach to visit Bloomingdale’s King of Prussia, Pa., by arranging a helicopter. She didn’t realize a fleet of helicopters was utilized to bring VIPs to the opening. “It was like a scene from ‘Apocalypse Now.’ That was Kal and the drama he created. He made you feel important. He made all of us feel special.”

She also admitted that he was “the best knockoff artist,” adding she remains puzzled how Ruttenstein managed to get clothes that looked like hers into Bloomingdale’s before she could deliver her collection.

Karan said she had two claims to fame in men’s wear. One was dressing Bill Clinton. “But more importantly, dressing Kal. Kal wearing my clothes was the coolest thing.”