René Storck presented a neo-casual side to his tony wardrobe staples for fall. 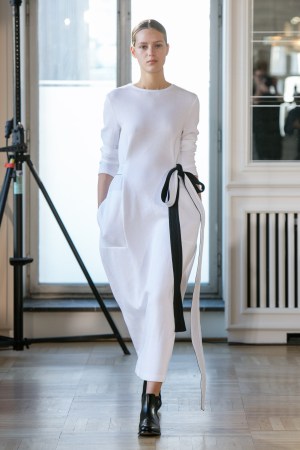 Ever a neoclassicist, Frankfurt-based René Storck presented a neo-casual side to his tony wardrobe staples for fall. In his first Berlin show at the Kronprinzenpalais, he sent out a compact selection of pieces that had straightforward allure, noting he dislikes styles that require too much explanation. Working with luxury fabrics, he elevated basics with special details. A sweatshirt, for example, billowed in whitewashed silk duchesse, and was worn over refined black boyfriend trousers that had a taffeta finish. Storck streamlined the classic hourglass silhouette on a softly rounded cashmere blazer, and elongated a single-button blazer to frock-coat proportions, which worked well over a crisp white poplin shirtdress with a long, ruffled shirt tail.