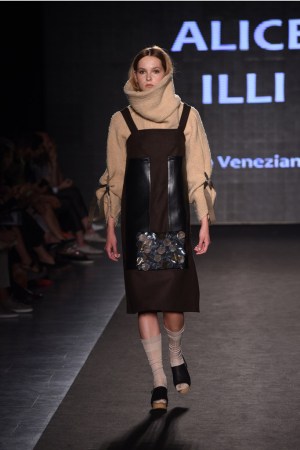 MILAN — “Believe in yourself and try to focus on your strengths and on what you are good at,” OTB founder Renzo Rosso counseled fashion students who flocked to the theater in Milan’s Triennale Design Museum on Thursday night as part of the first Milano Moda Graduate event organized by the Italian Fashion Chamber.

“Young people have virgin blood, they haven’t been contaminated yet. They feel what the others cannot feel,” continued Rosso, advising them to create customized résumés to send to the companies in which they are interested. “Go into their stores, check products and show companies your own personal vision of their brands. Whoever gets a curriculum vitae like that says ‘wow.’ Honestly, it never happened to me,” he said.

Rosso also put the accent on the relevant role that small companies can have in today’s market, which is extremely segmented and differentiated.

“A business doesn’t need to be necessarily big, it can be small. Technology is making things easier. But the most important thing is to do something you like and which is different,” he added, highlighting the fact that in markets like China customers are growing weary of big labels and are looking to other kinds of brands.

Asked about the biggest mistake from which he learned during his career, Rosso explained that for many years he hadn’t been able to fire people.

“I finally learned to take out the wrong person from a team,” he said. “Right people make the difference. Everybody should row in the same direction, and when this happens you go and win the Champions League.”

“He is a wonderful orchestra leader,” said Rosso. “He is not interested in generating buzz around him. He just wants to talk about the dream and beauty. When he creates a collection, he doesn’t focus only on clothes, but he starts imagining how the model will walk, what kind of music she will be listening to and what her attitude will be.”

After the speeches, select graduates from the fashion schools unveiled their creations with a collective runway show, and three of them scooped prizes assigned by a jury of experts, including Rosso, Capasa, Riccardo Grassi, owner of the prestigious namesake Milanese showroom, and designer agent Davide Dallomo, among others.