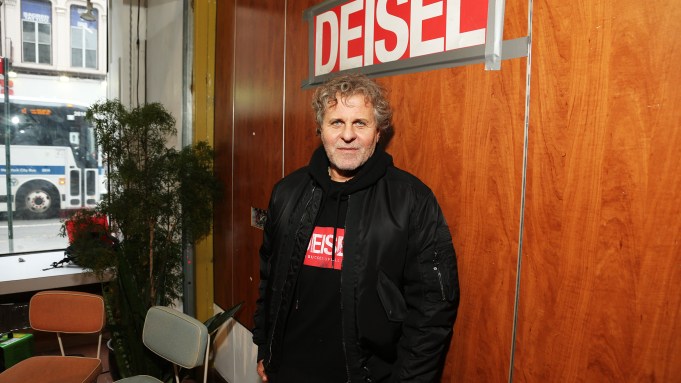 Renzo Rosso, the Italian fashion titan and Diesel founder, knows he has a lot of work to do. “We need Diesel to be cool again,” Rosso admitted. “We need people to start talking again about Diesel.

“Diesel was born with me,” he added. “I’m back to give my DNA. I created a good team of people, young people, very modern Millennials. They make me younger with the creation of products that are really connecting with what the young customer wants. The way we communicate, what we are communicating, we’re always working to bring some crazy fun with irony.”

In other words, to take Diesel back to where it used to be, when its ads in the Nineties were known for their quirky, ironic tone. And that is what the brand tried to do with its latest stunt.

A Deisel store — intentionally misspelled — on Friday opened on Broadway and Canal Street, the epicenter of counterfeiting, where lean-tos selling fake designer logos such as Gucci and Prada have long proliferated. The unit will operate through Tuesday or until inventory runs out. An e-commerce site will then bow for European customers.

Unsuspecting Diesel shoppers didn’t initially realize the items they bought were one-of-a kind pieces specially crafted by the Diesel design team and disguised with fake Diesel branding. It’s easy to see why they were confused: A rusty gate was lifted halfway above the door, beefy staffers with “security” on their jackets were positioned outside to prevent shoplifting. Fixtures were strictly of the bargain basement variety and cardboard boxes served as displays for shoppers to rummage through, Filene’s Basement-style.

“The fake store, that’s unbelievable,” Rosso said. “We play with our fakes. When we opened the store, people thought it’s really a fake store. People entered and we filmed them for our web site.”

OTB in 2016 posted revenues of 1.58 billion euros. While the group’s premium labels such as Maison Margiela, Marni, Viktor & Rolf and Staff International have been growing, Diesel, which accounts for the lion’s share of OTB, ended 2016 with revenues of 960 million euros but for the first time operated at a loss.

Asked whether there are other acquisitions on the horizon, Rosso said, “We are in the market because we are a group. I hope something can be on board by the end of this year.”

Rosso believes the “fake” store might be the right track to getting Diesel back in growth mode. “I like it,” he said of the store. “It’s exclusivity. All we made was 1,000 units We finished the inventory. Already, the stock is reselling on eBay. People who bought something for $60 are selling it for $500.

“We’re going to go into more exclusive distribution,” he said of Diesel. “Not department stores, just high, high stores, about 50 in the world.” He didn’t elaborate.

For now, Diesel is content to explore retail’s darker environs. Gucci Mane on Friday showed up at the store and gave Diesel and Rosso a shout-out on Instagram announcing its “grand reopening.”

“We had 2,000 on the line. It went all the way around the block,” Rosso said. Waiting customers encountered sneaker enthusiasts waiting for a drop from Stadium Goods, which last week got backing from LVMH Luxury Ventures.

The event was part of Diesel’s Go With the Flaw campaign that was teased on Instagram in late January with a video of a couple dealing with physical imperfections.

“With this creative team we’ve done many things,” Rosso said.”At Paris Fashion Week, we have a capsule collection we’re going to present in a more normal way.”

But don’t expect that to last. On Saturday, Rosso delivered a message of positivity, urging people to always choose love over hatred by jumping high over Venice’s Piazza Saint Marco stage while tethered as live Donald Trump and Kim Jong Un bobble heads stood by and watched. The event fell under the Only the Brave Foundation, the company’s philanthropic arm.

“I’m also very tired,” Rosso admitted, adding without a trace of irony, “This is a magic moment for the company.”