With his resort collection, Alessandro Michele drove home his audacious, eccentric vision for Gucci. Will the customer respond? 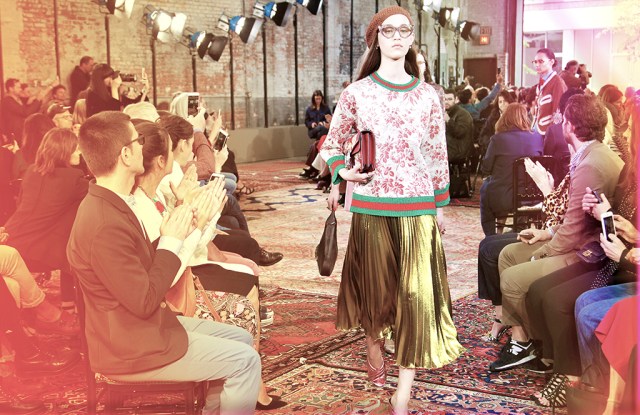 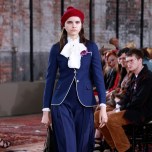 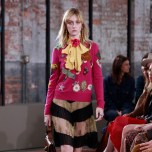 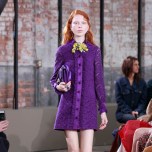 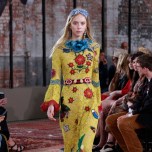 My job is creativity,” said Gucci’s creative director Alessandro Michele, explaining his lack of apparent nerves two days before showing his resort collection in New York last week. It was the designer’s second women’s collection and third overall after his shotgun appointment in January. The subtext of his comment was that while he now occupies one of the most high-profile posts in fashion, the work itself is more important to him than the megabrand name on the label of his designs. Michele’s calm demeanor belies the bravado of his fashion.

His clothes are not aggressive — anything but — and they manifest an audacious new dawn for Gucci, one on bold display for resort. He described his work as “a modern translation of decorative — it’s one of my obsessions.” Yet decorative can take various turns. Michele delivered his with a girlish innocence the house hasn’t seen before, not in the jet-set Seventies nor in the high-heat glory days of Tom Ford or the more temperate era of Frida Giannini.

Though fashion-famous for a mere six months after his men’s show in January, Michele acquired an instant reputation for gender-spectrum exploration, and the few men’s looks he included for resort continued in that vein. But in the early-going at least, his girls have been all girl. Girls of the decidedly geeky variety — geeks who want to be noticed. Michele embraced sartorial eccentricity and delivered it with a difficult-to-achieve believability. “I love prints and that kind of embroidery that came from the past, and some [other] precious things in a very contemporary attitude,” he said. “A mix-and-match of different kinds of color and silhouettes and prints.” The patterns came in vintage-looking florals and caustic geometrics. Sweaters flashed whimsical figurative embroideries, shirtdresses swung both austere in high-buttoned graphics and all-out romantic, done up with frills. An embroi- dered tiger, big and fierce, wrapped the bodice of an otherwise demure gown. Despite his abrupt departure from the Gucci Girl as we think of her, Michele noted his respect for the proverbial house codes. A longtime collector of prints — “I’m a collector of everything,” he said — that interest dovetailed with his perception of the house. “There are some prints that look like the house prints, but they aren’t really,” he said. “I like the idea of working with symbols of the company. I like the Web, I like the GG logo, bright green. I really love the kind of symbols that make me feel in a certain kind of way like Andy Warhol did with Pop Art — because they are very pop-culture symbols. I mean, Gucci for a long time [has produced] some really pop symbols for everybody. I understand that it’s a pop-culture symbol of luxury.

“It’s nice to give new life,” he continued. “I tried to give a new life to the Web, to the GG logo. The GG logo I really love.”

Michele’s dramatic shifting of the Gucci aesthetic from glam to geek makes his appointment one of the more interesting of recent hires, and catapults Gucci to a position of intense scrutiny.

On the industry scale, his arrival sheds light on a little-discussed pool of candidates for top jobs. When an opening comes up, most of the inevitably intense speculation centers on the various hot young stars who are so visible today. While François-Henri Pinault’s Kering has not been averse to installing name designers — Hedi Slimane at Saint Laurent and Alexander Wang and Balenciaga — it has shown equal proclivity for elevating previously anonymous back-room design studio types. Given the industry’s hyper focus on the kind of talent development that celebrates name recognition as much as skill, Michele’s promotion was probably more daring today than even Sarah Burton’s at Alexander McQueen in 2010, though less controversial than the trio of promotions that followed Ford’s departure from Gucci and led in short order to Giannini’s takeover as lone creative director in 2006.

For Gucci, the shift raises a practical question: Will the customer embrace this new direction or feel disenfranchised? Michele suggests that his philosophy, if not his look, is not so different from that of Ford. “You want really special, no?” he said. “I always say fashion should give a relic….In the Nineties when you went to a Gucci store and you had Tom’s [clothes], you had a relic, something unique. When you wore that, you felt like super- sexy. I think we need to give again something that makes you dream.”