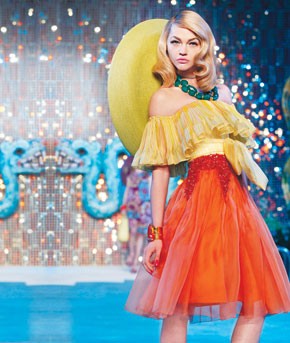 The resort season just keeps getting bigger, and nothing illustrated that like the Christian Dior collection John Galliano showed on Monday. Inspired by Millicent Rogers, Gloria Guinness and Acapulco, the flamboyant, citrus-colored styles included off-the-shoulder peasant tops, like this dramatic one, sashed over a full skirt and worn with a big hat and assertive jewelry à la Rogers.

Talk about an emerging market. Resort has exploded in the past few seasons with all the gusto, gun-slinging and disarray of consumer goods out of China. It is fraught with its own set of controversies, some of which already seem to have obvious answers. One, is there anyone who covers resort — that would be the retailer-and-press set — who doesn’t think that the six-week marathon, which opened on Monday with several showroom appointments and an awesome, over-the-top, muscle-flexing extravaganza Christian Dior show should be reined in, perhaps to a two-week period? Two, with that Dior production as exhibit A (exhibit B to follow in Miami on Thursday evening courtesy of Dior’s friendly adversary Chanel), is it not now crystal clear that resort is fashion’s new marketing jewel, an opportunity for a house to take its case on the road directly to the people, whether here in New York or in one of those more exotic far-flung centers of seemingly endless new consumer yearning?

At least there is such opportunity for the fashion haves. But this is a world of haves and have-nots. While for some houses, large and small, the no-show decision is based on the opinion that resort should be intimate and all about the clothes. The minute you start venue-scouting and obsessing over hair and makeup, goes the thinking, you shift focus from the clothes to the production. But designers are defecting from that camp like superdelegates from Hillary Clinton. On Tuesday, Oscar de la Renta will show resort formally for the third time. Others adding shows include Diane von Furstenberg, who is hitting the road for Florence.

Yet many houses don’t even have to get that far, as most simply can’t afford to stage a third proper show, especially with the bar set sky-high. The Dior event, held at Guastavino’s, the newly renovated and reopened event space under the 59th Street Bridge, was a major offensive at a wretched moment for consumerism in the U.S. And the citrus-colored clothes certainly channeled sunnier times. Galliano was inspired, he said, by “great American couture buyers Millicent Rogers and the fabulous Nan Kempner,” as well as Gloria Guinness and days spent “poolside in Acapulco.” And what would such icons wear on a modern-day, South-of-the-Border getaway? Off-the-shoulder peasant blouses, exaggerated pantaloons, backless and halter nip-waist frocks, and filmy djellabas, many of which featured a soupçon (well, more like a soup vat) of 3-D decorative motifs inspired by Tony Duquette’s interiors. “They’re very bold, very contemporary,” said Galliano. Or, in other words, fun, real clothes for ladies of a flashy proclivity; to wit, Jennifer Lopez, perched at the faux pool runway with Marc Anthony by her side, who uttered an audible sigh of approval at the sight of a green number, a caftan that incorporated a shapely gown beneath its flou, the better to show a gal’s post-baby svelteness.

And considering the bucks Dior spent, including airfare for a healthy international press contingent, to stage such a splashy affair, you could bet Lopez and her beloved weren’t sitting poolside alone. Indeed, there was enough star-wattage to compete with the runway’s glittering backdrop. Christina Aguilera, Charlize Theron, Leighton Meester and Ziyi Zhang, some in vibrant, breezy little cocktail shakers on what felt like the windiest day ever in New York, were among the off-runway beauties, who also happened to include an official beauty queen: Sherryl Pascal, aka Mrs. New Jersey, American Beauty. She accessorized her peach Dior capris with a proud pageant sash and a giant Swarovski crystal tiara. “It gives me a blinding migraine,” she said. “But it’s nothing a Percocet can’t take care of.” Medicated or not, Pascal is willing to suffer, or make others suffer, for her fashion obsession. “I turned my son’s room into a shoe closet,” she admitted. “He sleeps somewhere else.”

Would J.Lo consider doing the same to her newborns’ sleeping quarters? Who knows? She wasn’t talking to anyone — press, that is — although she did mouth sweet nothings across the runway to Aguilera, who was in town shooting her fragrance campaign, and marveled at Galliano’s “genius.” Not the least of which includes infusing Dior with enough class and sass to assure cross-generational appeal. As Anne Slater put it, “He’s a little exotic for me sometimes, but he’s divine.” And in the eyes of Lauren Hutton, who had never been to a Galliano show (and evidently no longer suffers for fashion — she took her heels off immediately after the show, before she’d even gone down the stairs), Galliano is “a wizard; he does bizarre wizardly things.”