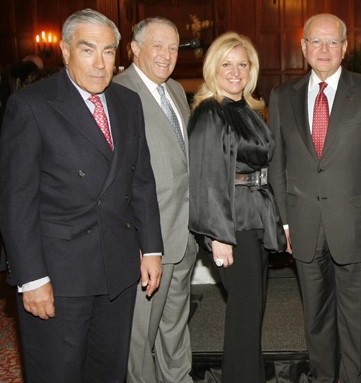 In a short but sharp exchange between the two retail chiefs and panelists at Financo’s Annual Industry Seminar & Merchandising Chief Executives Cocktail Reception, Drexler portrayed the department store business model as flawed, with stores lacking control of their destinies and at the mercy of brands that set prices and often open their own stores, which cannibalize sales from the very retailers they supply. Drexler, who has made his mark at two vertical retailers that sell in-house brands, Gap and J. Crew, fueled the old debate about whether the department store, even one selling luxury goods, ultimately can survive.

In the past, Drexler has been critical of the designer business, saying its prices are too high, and asserting that J. Crew is providing designer-quality clothes at lower prices. At Financo’s event, he raised the issue again, and in effect took a shot at Neiman Marcus, which has built its reputation on selling high-priced designer goods provided with lavish service.

“The world is not about overpriced designer [goods] anymore,” Drexler said, adding, “The days of $800 to $900 shoes are over. We [J. Crew] have adjusted prices and are going after [luxury] businesses that have grown hugely.”

Picking up on one of the recurrent themes during this year’s National Retail Federation convention, Drexler also suggested recent events have inalterably changed the consumer, who simply isn’t shopping as before. “I don’t think it’s going to get back to where it was before,” he said.

“Our customers have voted time and time again for branded goods,” Tansky said. “They are not vacating that so quickly.” Drexler responded that he wasn’t denigrating anyone. “There’s just a lot less money in the system,” he said. “Hey, Burt, I’m just looking at the world where I think it is. You make your bets, I will make mine. I just think the consumer is pushing the reset button. I would hate to bet my future on companies that I have no control over.”

As far as designers opening their own stores, when Drexler said it hurt department stores that carry the same brands, Tansky replied, “That’s nothing new,” implying that Neiman’s and designer shops can coexist profitably.

He emphasized, “You cannot control your product without controlling price and controlling distribution.”

Drexler added that chains tend to overexpand. “In my old job [at Gap], we expanded beyond what we needed,” he said. “There are big white elephants out there. If you compete on price, you lose. At the end of the day, it’s about product, creativity, consistency and innovation, and I don’t think there’s enough of that in our industry.”

Although standing by his customer and business model, Tansky expressed deep concern about the state of the economy and its effects on retailing. “Now the rich have stopped shopping. I’m upset with our customer. A 401(k) is a 201(k). In some cases, it’s a 101(k). Frugality is in fashion. The alligator belts are tightening….Who knew a wallet could hibernate?”

He continued: “Husbands used to say ‘Enough.’ Now they say, ‘Don’t even think about it.’ While it’s “hard to be a retailer, it’s harder to be a luxury retailer,” he added.

However, asking rhetorically if luxury was dead, he responded, “No, a resounding no.”

“Unfortunately, the affluent customer does not need anything,” Tansky said. He further lamented that “it’s disturbing that 30 percent off no longer tempts the customer.”

But Neiman’s is fighting back against the forces of recession, reducing inventories to line up with demand, adding “the marginal guys are going.”

“The most successful retailers are nimble and responsive to the psyche of customers….Service and strong relationships with customers are our strongest competitive advantage….We have not panicked. Our customers are not trading down. They are simply buying less, much less.”

The jabs that started at the seminar continued into mealtime, with top retail executives taking good-natured, yet pointed, swipes at one another.

First up was Saks Inc. ceo Stephen I. Sadove, who was given “equal time” with competitor Tansky. This prompted the Neiman’s ceo to chime in: “Equal time minus 40.” “Only 40?” Sadove responded, “I thought it was 60.”

The thinly veiled jokes about discounting continued when J.C. Penney Co. Inc. ceo Myron “Mike” Ullman 3rd said dryly: “Our biggest price-point problem is that we have Neiman’s and Saks in our price points.”

With the levity behind them, however, the retail executives got serious, with most not expecting any sort of pickup until 2010 at the earliest. And even then, they fear consumers are unlikely to return to their free-spending ways, meaning retailers will have to go back to basics and make tough decisions if they want to survive.

Sadove said he’s focusing on controlling receipts and expenses and managing for cash, while Brooks Brothers’ Claudio Del Vecchio said his 190-year-old company is focusing on enhancing its “relationship with the customer.”

Developer Bob Taubman said that with the enormous infusion of cash the government is expected to inject into the economy, “things will improve,” but not for another 12 to 18 months. And Larry Leeds of Buckingham Capital Management started his comments by saying he was a “very gloomy pessimist.” With consumers squirreling extra cash into savings accounts or using it to pay down debt, Leeds said they will buy less. And he expects the luxury end of the market to be “hurt worse than any other part,” which prompted Tansky to roll his eyes and shake his head.

During the seminar, Grossman said HSN, which functions as a retailer with content, will focus on keeping the brand strong and not overleveraged. Like others, it is staying “lean to prepare for uncertainty, [yet] doing nothing that would affect customer service.”

Noting the overabundance of stock in the marketplace, she reminded attendees that “scarcity drives demand.” She also noted the brand should always come first and pointed out that “quality costs less in the long term.”

Grossman said that Stefani Greenfield, formerly of Scoop, will feature in a new program on HSN at the end of March called “Curations by Stefani Greenfield.” According to Greenfield, the show will offer viewers “a collection of things we find and curate,” adding the “concept is that cheap is no bargain, but 85 percent of what we’re selling is under $85.” Greenfield said the concept will be “accessories-driven.” She also has a consulting firm, called My Next Act, launched last fall.

Crate & Barrel’s Segal said that, instead of blaming others, the solution to retailing’s ills was to “make our company and good retailers better.” While leaner, meaner and tougher are attractive catchwords, the most important term to insure survival should be “agile.”

“Consumers will change, and our job is to change right with them,” he said. “You can’t forget that all we are are traders.”

Simon said that, because of the lack of debtor-in-possession financing, the rush to file for Chapter 11 by retailers may be slower. He expects little or no mall development over the next decade but stated that “the strong properties thrive even in this market.”

Separately at the NRF cocktail reception held at the 21 Club, Macy’s Inc. chairman, president and ceo Terry Lundgren observed, “The most important thing to do is to get inventory in line with sales….It’s going to be a tough 2009, whether it’s for three quarters or four quarters. I just hope it ends sooner rather than later.”

Christine Day, Lululemon Athletica Inc.’s president and ceo, said, “For us it’s about the long-term brand status,” adding the company was starting the year with a very “fresh” inventory position that has continued to be low because the company has been adjusting the inventory since the middle of last year. Day acknowledged the company’s stock has fallen substantially, but she said there has been a lot of “turmoil in the market,” adding Lululemon has free cash flow and no debt.