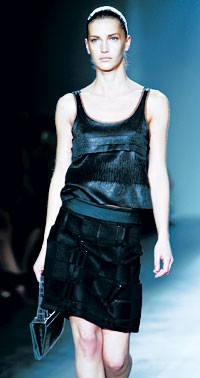 Retailers said they were particularly impressed with the showings of several young designers, including Derek Lam, Zac Posen, Thakoon, and Jeffrey Chow. Among the standouts from the more established crowd were Calvin Klein Collection, J. Mendel, Ralph Lauren, Donna Karan, Michael Kors, Oscar de la Renta and Carolina Herrera. Probably the most controversial show of the week was Marc Jacobs, not only for his tardiness but also his voluminous dresses.

Here’s what some key fashion executives had to say:

Kal Ruttenstein, senior vice president of fashion direction, Bloomingdale’s: “Overall, the week was very exciting. There was a lot of diversity, and more volume to the clothes, giving the designers greater ability to play with shape. Among the most important shapes is the skirt in all of its new ramifications: dirndl, pleated, tiered and bubble. There were lots of rich fabrics, but we like them in casual shapes, like velvet in jeans. The inspiration of Imperial Russia gave a romantic feeling to the season. We especially liked it when it was not too literal. With all of the peasant blouses, gold chains and fur hats, sometimes it became too Zhivago-esque.”

Ruttenstein cited Marc Jacobs for an inspirational collection involving oversized shapes, an incredible color palette and great fabrics; Francisco Costa at Calvin Klein for a modern collection of narrower shapes, shorter lengths and new ways of putting the clothes together; Zac Posen for his new maturity and elegant, deceptively simple dresses, and Ralph Lauren for a polished American sportswear collection infused with a new sexy attitude.

Ruttenstein also said two contemporary designers made great strides: Rebecca Taylor, with a touch of the Slavic but in a modern, fun way, and Derek Lam, for great trenchcoats, full skirts and narrow pants. He also cited Proenza Schouler for mixing corsetry with modern clothes and Costello Tagliapietra for unique, modern and simple fluid jersey dresses.

Robert Burke, vice president and senior fashion director, Bergdorf Goodman: “I can’t remember a season that has been more divided in the opinions. I thought Calvin Klein was a huge standout, a very strong collection and really pivotal for Francisco Costa. It was modern and feminine and very innovative. Ralph Lauren had a very focused and strong show, one of the most solid of the week. J. Mendel was also very strong and incredibly well-designed. And Vera Wang also had a great show. I thought Marc Jacobs was very directional, interesting and a salable collection.

“As far as the younger designers, Derek Lam was a standout. The colors were great, and it was new. Jeffrey Chow was also strong. We have not sold Thakoon before, but I thought his collection was very good.

“There’s clearly a shift toward modernism and while it’s still not completely minimalist, it’s very clean and not quite as overtly feminine. There were also a lot of interesting fabrics, such as velvet, but all done with restraint. We are coming off a more-is-more moment and into a less-is-more, more-sophisticated moment. The tulip or bubble skirts in light fabrics could be interesting, I am seeing a lot of interest in the waist, like dresses with a defined waistline.”

Joan Kaner, senior vice president, fashion director, Neiman Marcus: “I’ve especially liked the young designers. They really came through. Jeffrey Chow was very good; Derek Lam was fresh, new and had a wonderful, easy kind of spirit and was terrific; Y & Kei was very interesting, and Catherine Malandrino was very nice. There were many different moods and good items. There were wonderful skirts everywhere, it’s either pouf or trumpet flares below the hip. I also saw some wonderful knitwear, and especially liked Jeffrey Chow’s long cardigan.”

As for the established designers, she said, “I loved Michael Kors, especially his tweed sweater sets with fur collars. Ralph Lauren was beautiful. His long sweater coat was an absolute standout. It was clean and sophisticated and there was something for everyone.”

She also thought Oscar de la Renta and Carolina Herrera had strong showings. “At Oscar, I loved the continuation of the ikat coats, the skirts banded with color, and the Tyrolean jackets. At Carolina, I thought the eveningwear was beautiful, especially the moiré gowns.” While part of Donna Karan “went over the top,” she said, “the coats were beautiful and the full skirts were great, as well as those with low pleating. It was romantic and sensuous.”

As for the big themes of the week, she cited Russian; middle-European looks; classic American looks; grunge couture (Marc Jacobs); the little black dress in knee-length or below-the-knee (“it’s a new version of the cocktail dress,”); beautiful coats, and fur.

Julie Gilhart, vice president and fashion director, Barneys New York: “Marc Jacobs was an exceptional collection because he took risks and the result was quite beautiful. Proenza Schouler showed us how many ideas they have and Narciso Rodriguez took a step forward in trying to evolve his aesthetic. I loved Daryl K, because it was a small presentation. She really put so much effort in speaking to her customer and designing clothes for her. I loved Trovata’s presentation because they brought a freshness to fashion.

It’s all over the place for trends and we will need Europe to help us home in on the major trends. In New York, we saw the use of men’s wear fabrics, the richness of velvets and the playing with volume.”

Barbara Atkin, fashion director, Holt Renfrew: “Fashion week turned out to be fantastic. There was a return to beautiful decoration, wonderful details, rich colors and historical references from Russian literary heroines to the great Ottoman Empire, but always with a modern twist. However, it was a very dark season so what we need to do as buyers is to make sure we have enough texture and patterning. There were so many people doing all these costume-y clothes. We have to find the right balance between minimalist and overly decorated, and those big volume skirts may be difficult for our customers. We may need to educate them.”

Sue Patneaude, executive vice president, designer apparel, Nordstrom: “It’s going to be an item season. There are a lot of beautiful individual pieces, many with an Eastern European feeling that’s new for the market. It’s about Russia, the czars, the gypsies. We are calling it a rustic opulence, lots of embroideries, jewels, passementerie and brocade treatment. We’ve moved from Asia to Eastern Europe. We love most of the color palette — the rich plums, chocolate browns and deep teals.”

She said Calvin Klein was right on target, with clean interesting silhouettes and details such as tile pattern with sequins; Zac Posen she described as evolved and very sophisticated; she liked Michael Kors for his fabulous red, and said Donna Karan showed a dramatic and very beautiful collection. She also cited emerging collections: Derek Lam, for “gorgeous” skirts, and Lela Rose and Jennifer Nicholson for “perfectly executed collections.”

Michael Fink, senior fashion market director, Saks Fifth Avenue: “Marc Jacobs took an amazing new direction, filled with creativity and proportion and it was very romantic. Donna Karan was fantastic. There was a real consistency throughout the presentation. I was so excited by pre-fall, and loved the romantic blouses, the twisting and ruching. Other highlights were Vera Wang and Derek Lam. Thakoon has been interesting to watch and Y & Kei gave another beautiful show.

“There is a whole Victorian feeling with lots of shoulder interest, from capelets to lace and puffy shoulders. The trend takes you into the return of black, which was very romantic, not the minimalist black. Full skirts continue, and they are more sophisticated than in spring with more embroidery. I also saw a return to suiting, which I found surprising.”

Nicole Fischelis, vice president and ready-to-wear fashion director, Macy’s East: “The season was very much about fusion between tailored and full, embellished and clean, and individualism — special pieces for impulse buys. There were a lot of furs, velvets and embellishments, but it’s also how you put it together, edit and put it in a different context. It’s a very eclectic, happy, luxurious and sensuous season.”

Stefani Greenfield, co-owner, Scoop: “Fuller skirts looked really right. I thought it was a really elegant, feminine, softer, ladylike look than we had for last fall. I loved the reintroduction of blouses that we saw everywhere. There was less of a structured severity as opposed to last fall. One of my favorite things of the week was the combination of navy and black. The quintessential New York girl ‘gets’ navy and black. I loved so many elements of Marc [Jacobs’] show, but to see the navy and black combination, I loved it.

“Michael Kors was a fun show and I adore Michael, but it was really just beautiful American sportswear. From a retailer’s perspective, it was beautiful, true to Michael’s spirit. He totally follows his internal compass. It was the most salable collection on the runway. It celebrated the woman in so many ways, she was sleek, she was feminine, she was empowered.”