Retailers were pleased by the feminine looks at New York Fashion Week. While the styles weren’t revolutionary, buyers said they were likely to sell. 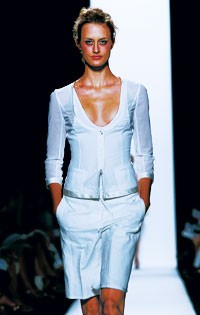 NEW YORK — The lady is still in waiting.

But while some retailers viewed those “pretty” styles as easily accessible to consumers and thus immensely commercial, others said they were bored by the lack of direction.

Here is what the buyers had to say about the week:

Julie Gilhart, Barneys New York, vice president and fashion director: “I actually really liked this season in New York. There was a lot of energy and I thought the shows were great. But what the designers really brought to the table were color and print, and that’s a good formula for strong retail sales. If there are color and prints then there are sales to be done. From our standpoint, the spring season is going to be great. I think designers handled the fuller volume very well,” in regards to the baggier pant and voluminous skirt and dress silhouettes. “They made it easy to wear, but they also made it look like a different silhouette. However, designers didn’t completely abandon the more body conscious, thin silhouette either and overall gave us a lot of balance.”

Michael Fink, Saks Fifth Avenue, senior fashion director: “It was not a ‘wow’ week. There was not a new clear direction, but there were moments in many shows that showed creativity and a little bit of direction. The big thing is that it’s still a very pretty, feminine, girly season coming up. Trends on the whole include that whole python statement, whether it was real or printed; Moroccan and North African prints, which we love, especially in caftans and tunics, and all the jewel trims. In terms of silhouettes, everyone had a full skirt, either a pouf or softly pleated one. Also, the long short or the cropped, slouchy pants. It was sort of a grab bag of silhouettes. As for the jewels, all the crochet, all the eyelet, we haven’t seen decorative trims like that in a while. Our favorite shows were Marc Jacobs, Oscar de la Renta, Derek Lam, and we really loved the additional classification of daytime at Vera Wang. We thought it was a bold statement.”

Anna Garner, Selfridges, head of fashion: “I thought overall it was a pretty safe, pretty tame season. In terms of color it was really strong, with ethnic and exotic influences through embroidery and embellishment. That bohemian feel is coming out again, but in a slightly more elegant way.” Garner’s favorites included the tiered skirts at Matthew Williamson, athletic tailoring at Marc by Marc Jacobs and Daryl K. Key items she noted for spring were long shorts and vintage-looking belts.

Kal Ruttenstein, senior vice president of fashion direction, Bloomingdale’s: “There were so many new young designers with interesting and salable collections and strong collections for established stars. There still is a lot of color, but white looks were very strong, especially at Ralph Lauren and Zac Posen. Full, soft skirts have replaced the pencil skirt as the look of the season.” He cited Marc Jacobs for color, young shapes and cropped pants; Zac Posen for a strong and rounded collection of sportswear and dresses; Lauren for a timeless, elegant collection in pale colors, lots of white, and tasteful red carpet dresses, and the new Stella McCartney for Adidas line of activewear. “It was a really great contemporary collection with a lot of technical fabrics, for the gym, yoga or for wearing anywhere.”

Robert Burke, senior vice president of fashion and p.r., Bergdorf Goodman: “It was a tremendously strong season, one of the strongest in a very long time. It was fresh, sophisticated, but more relaxed and looser. I was incredibly impressed and surprised with how strong the young designers came on, like Derek Lam, Jeffrey Chow, Zac Posen, even Milly. They had a sophisticated approach and still made it really modern. The major guns, too, came on strong — Oscar de la Renta had beautiful, sophisticated clothes that were young and modern; Ralph Lauren had beautiful dresses; Chado Ralph Rucci had one of the most artistic and best shows I’ve ever seen.” He also cited Vera Wang for a unique signature mix, Narciso Rodriguez for color and fluidity, and Calvin Klein for running with a T-shirt-dress concept.

Joan Kaner, senior vice president, fashion director, Neiman Marcus: “Chado Ralph Rucci looked extraordinary. I loved the movement, lightness and little bare dresses for day and evening, and the wonderful colors, such as apricot and lime green.” She also cited de la Renta for a “very strong collection,” particularly the suits, dresses and white knit pieces; Proenza Schouler, especially their prints, florals with wooden beads, and ombré satin with palm tree scenes, and the Phi collection. “Prints are everywhere, there’s a hint of ethnic, but it’s never costume-y. You can wear an Indian shirt with beading with jeans or a cropped pant.” Kaner also raved about the empire dresses for late day seen on many runways and the new to-the-knee shorts. “You can wear it with a higher heel and a good-looking top and it can be a citified look.”

Scott Tepper, Henri Bendel, fashion director: “Oscar de la Renta’s collection was flawless to the piece. Like Mr. Lagerfeld for Chanel, he proved beyond a doubt that his work speaks to clients of every age group and location. Michael Kors continued his winning streak, in 15 minutes he managed yet again to create a completely glamorous lifestyle for his clients, from the beach to big evenings in the city. Miguel Adrover’s tailored pieces were quite extraordinary. Stephen Burrows collection was a burst of fresh air, masterfully colored, and most importantly updated to capture a modern audience. Diane von Furstenberg as well delivered a knockout collection that cuts across all generations.”

“Animal prints cannot be overlooked in general. Tiger, python, leopard and zebra, particularly in bright colors and all kinds of fabrics and leathers, will sell well for spring.”

Stefani Greenfield, Scoop, co-owner: “I loved Michael Kors and his whole fabulous ode to Greece. It really embodied the spirit of how women want to dress in the summer.” Greenfield also pointed to the long sumptuous skirts at Tuleh and the colorful herringbone jackets at Marc Jacobs. “To me, that’s money in the bank. My customers always want to know what the new Marc Jacobs jacket is and they always want to buy it.” She also noted strong prints at von Furstenberg and Williamson’s detailing with shells, beading and serape ticking stripes.

Evelyn Gorman, owner, Mix, in Houston: “We’re certainly seeing in the showrooms and the runways comfortable shorts, some slim, some baggy.” She cited Rodriguez’s beach boy surfing baggy short as a favorite. “Overall, the season was marked by a modern femininity, not a throwback to a lot of girly things. Things are not that structured, but there is a more modern point of view about femininity. I was thrilled with Roland Mouret, who put it together in an edgy, not retro way, and was a very, very workable collection with unusual fabrics. I’ve never seen a matte flat cotton boucle before, but maybe there are people who have had it. I also loved Roberto Menichetti. He was modern and relevant. A lot of people trash simplistic minimal dressing, but I love it. It was very straightforward.”

Khajak Keledjian, owner of Intermix: “I liked the ethnic feeling that was a theme in several collections. The Moroccan influence was evident in Diane von Furstenberg’s prints, as well as in her tunic dresses and long skirts.” Williamson also won points for his Peruvian- and Indian-inspired long skirts, short-sleeve silk blouses and mix of colors. Anna Sui was another winner for her bohemian and Native American-inspired pieces. “In general, it was just happy, after coming off a fall with lots of tweeds and other heavy fabrics.”