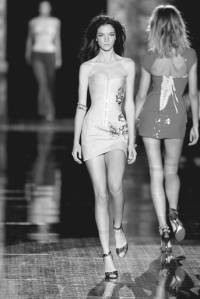 MILAN — Are Italy’s spring fashions too hot to handle?

All the microminis stalking Milan’s catwalks in the last week might be giving some retailers major pause, but most praised Milan fashion week’s steamy provocation — and creative variety. Retailers — clearly like the designers themselves — are hoping higher hemlines, brighter colors and snappier prints will energize luxury shoppers amid a sluggish market.

Jacqui Lividini, senior vice president of fashion merchandising at Saks Fifth Avenue, agreed that sex will likely sell. “The message, ‘Make love not war,’ was loud and clear,” she said.

There were dissenters, though.

“I think most of the strong sex appeal fell flat except for [Roberto] Cavalli, who did it in a very couture, sexpot way,” said Robert Burke, vice president and senior fashion director at Bergdorf Goodman. “As a whole, I don’t think it was the best season for Milan.”

But Burke did cite strong collections at Missoni and Prada, praising Prada’s silver ballet slippers and the Asian-influenced tailoring at Blumarine.

Many buyers expressed surprise at the racy, upbeat designs on Milan’s catwalks. April Glassborow, senior buyer of international collections for Harvey Nichols in London, said she anticipated more cautious fashions, based on the pre-collections she bought and the uncertain economic and political climate.

“I’ve been pleasantly surprised,” she said. “There are very strong themes coming through the collections,” including Oriental, sport and punk influences. “There’s quite a lot to appeal to different customers. We’ll be spending more than we planned to.”

The Italian collections have a reputation for being single-minded vis-à-vis trends. Not so this season, which had Sue Patneaude, Nordstrom’s vice president of designer apparel, smiling.

“What I love is that there’s so much variety,” she said. “I think it’s a particularly creative season. There’s not just one theme. I just got my fashion fix and I really needed it. We saw several outstanding collections.”

Among the standouts Patneaude mentioned: Roberto Cavalli, which she gave an 11 out of 10, Missoni, Moschino Cheap & Chic, Dolce & Gabbana and Blumarine.

Patneaude cited such details as tiered chiffon, crochet and macramé details, corsetry, short and flippy skirts and colors and prints as newsworthy. “Fashion is what’s selling now: nothing basic. And color is the natural evolution of all that,” she said. “I think the customer is ready for color.”

Lividini agreed. “The customer is always looking for something new,” she said. “That’s why we like the Asian influence.” She said she was able to find wide enough of a variety for the more demure customer and the more fashion-driven customer.

“Once upon a time, Milan was known for conservative, well-tailored clothes,” Ruttenstein said “Now it is more exciting.”

Ruttenstein warmed up to the sizzle from Gucci, Versace, Roberto Cavalli, Dolce & Gabbana and Voyage and at the same time embraced “a return to reality” from Armani and Burberry Prorsum. He said he thinks Bloomingdale’s can pick the best of both worlds for a well-rounded stock.

Despite those glowing fashion reviews, Ruttenstein said his budget probably won’t increase this year compared with last year’s, as business is still tough. Most retailers said budgets are not finalized, but suggested they were plotting larger allocations only for exceptional collections.

Beyond the racy hemlines, other ideas on the catwalk proved contentious. Some buyers had a cool reception for one recurring theme: an edgy Eighties look that verged on punk.

“A little bit of Eighties detailing goes a long way in retail,” Burke noted. He said he wasn’t crazy about the zipper-laden Jil Sander line and punky tendencies in collections like Dolce & Gabbana, Moschino and Fendi. “I think the Asian theme has far more validity.”

She expressed similar doubts about the widespread potential for minis. “Every woman will have to let her conscious be her guide,” she said.

Kaner suggested Oriental touches would be a surer bet. “The kimonos were standouts,” she said. “We found lots of good things at Prada, Gucci, Armani and Blumarine. Other promising items include dresses, blouson jackets, pencil skirts, cargo pants and novelty pants.

She also praised the Asian influence and a sporty spirit evident in racer backs, drawstrings and anorak shapes, for adding depth to the collections.

“Overall, I think it will be a great season,” she concluded, listing Miu Miu, Prada, Jil Sander, Versace and Giorgio Armani among the standouts. “We’re going to stretch [our budgets] to include some of the surprises.”

Al-Sabah singled out Fendi, Marni, Roberto Cavalli, Dolce & Gabbana and Miu Miu among the standout collections, declaring that the latter took “true American sportswear and made it edgy and fashionable.”

He said his only disappointment in Milan was the dearth of new designers. “I think Paris is going to take more of my budget, especially when it comes to new talents,” he said. The runway shows in Paris start officially today and run until Oct. 11.