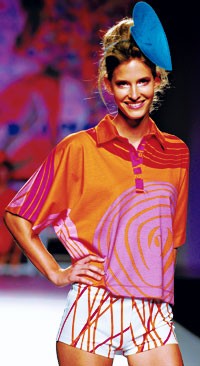 The presentations featured 26 designers, 23 shows and such key trends as eclectic retro interpretations.

For example, Locking Shocking, a Madrid-based duo made up of 32-year-old designers Ana Gonzalez and Oscar Benito, was inspired by “the existential anxiety of contemporary man and his survival on the horizon of nostalgia,” according to the show notes. That meant lots of funky layers such as vests, capelets and harness effects with full-skirted silhouettes and pants variations; knee-length leggings, and unexpected texture mixes in gray, black, white, wild mustard and silver.

On the other hand, Miguel Palacio showed trenchcoats, easy shirts and low-slung pants with exaggerated turned-up cuffs “estilo Zac Posen,” brayed the fashion press. His best items were a series of pretty dresses, flounced or beaded, in shades of putty beige.

Palacio is fashion’s man-of-the-moment. Early last month, he designed the wedding dress for Laura Ponte, the face of Loewe who married Beltran Gomez-Acebo, son of the Duchess of Badajoz and nephew of Spain’s King Juan Carlos. All the Spanish royals turned up at the wedding, where the bride wore a high-necked gown with a beaded Art Deco motif.

Ponte and her new friend, Letizia Ortiz, Princess of Asturias — the future queen of Spain — were expected to attend Palacio’s show. While they didn’t, Carolina Herrera surprisingly did, confirming what everybody suspected — that Palacio designs her highly successful secondary line, CH, for the Spanish market, which is produced in the north of the country. Carolina Herrera is owned by the Puig Group of Spain.

Herrera stayed on for Jesus del Pozo’s show, where she curtsied to Infanta Cristina, Duchess of Palma de Mallorca. The Spanish monarchs’ daughter is a loyal del Pozo fan, but unfortunately, he didn’t pull it off this season. Texture mixes, asymmetrics, novelty cotton tops and poufed romper shorts looked forced. His best was a cropped halter jumpsuit in nautical stripes on Ethiopian supermodel Liya Kebede and a regatta blue Forties swimsuit on Eugenia Silva.