The Return of the Yuppie

A tale of two cities that dress as one? The suits, sweater vests and polar fleeces typical of Midtown Manhattan office lunch lines are being imitated with a certain irony downtown, where creative circles have begun “festishizing” the yuppie wardrobe.

A generation of creative freelancers with little more exposure to 9-to-5 culture than reruns of “The Office” are finding new appeal in Eighties preppy and yuppie codes. Louche pin-striped slacks, argyle sweater vests and loafers have become a cool, genderless uniform for a youth that is, ironically enough, increasingly disillusioned by the large corporations where these styles originated.

Vaquera’s Patric DiCaprio wryly characterized the look as “a golfer dad with a skateboard.” There’s the designer and model Ana Kras attending a party in a sweater vest and oversize suit; writer and “Uncut Gems” actress Hailey Gates in a cable-knit sweater and navy blazer looking like a vintage Ralph Lauren ad; the florist Marisa Competello carrying an L.L. Bean tote in lieu of a purse, and Isaiah Barr, frontman of the underground jazz group Onyx Collective, in a blackwatch plaid wool trenchcoat in promotional images for his newest album. 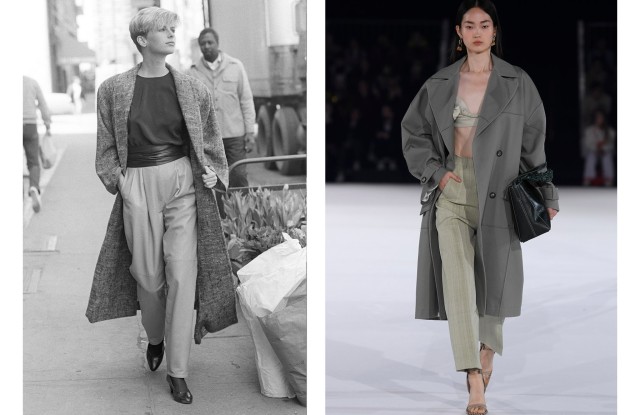 Yuppie suiting and formalwear have also begun hitting the collective consciousness — infiltrating the streetwear market as well as last month’s batch of European runways, where a new buttoned-up extravagance was seen at shows including Prada, Vetements, Gucci, Louis Vuitton, Dior Men’s and Off-White. Streetwear heads and tech executives — both known for their casual approach to fashion — are seeking dressier looks that still offer a sense of flamboyance and individualism, also leading them to Eighties yuppie styles.

The Eighties urban archetype of young, upwardly mobile professionals represented a new disruptive class who leveraged their expendable income from jobs in finance or law to explore the new frontiers of a globalized economy — eating new bourgeois international foods, traveling on the Concorde, and exercising in the world’s first luxury gyms.

The culture, in some ways, is not so different from the tech and marketing professionals of today’s increasingly gentrified urban landscape, who drive to Queens in their vintage station wagons to try “authentic” international specialties, leverage unlimited vacation and work-from-home policies to backpack southeast Asia and boast about the mindfulness acquired via unlimited memberships to ClassPass or Equinox. 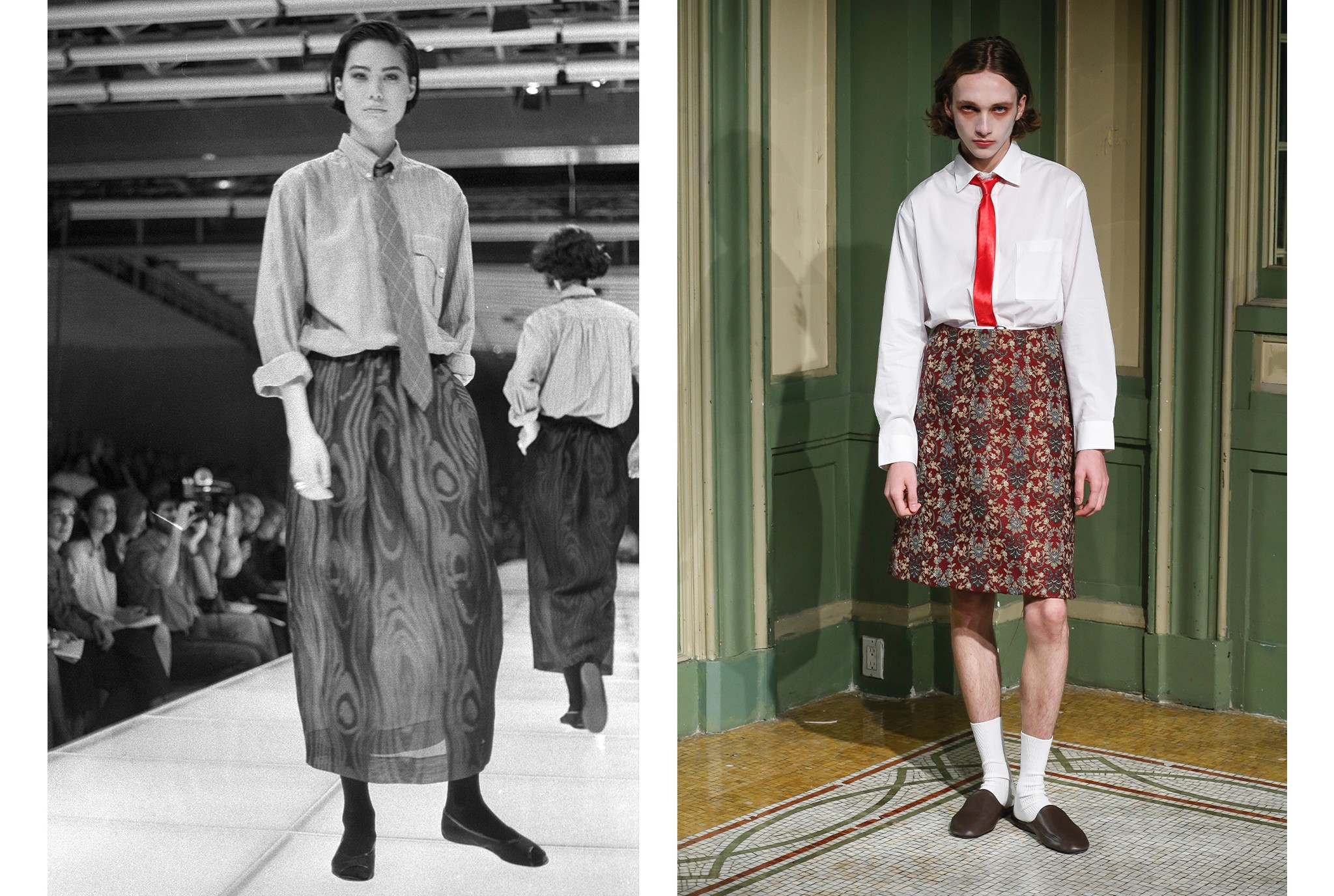 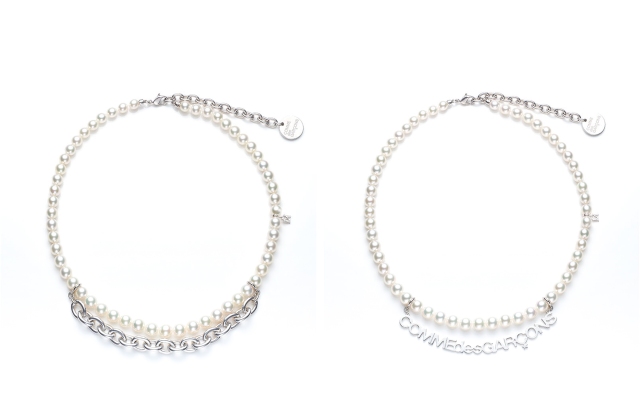 But more pertinent to today’s yuppie redux is the movement’s fashions, at one point considered a tasteless, garish interpretation of the old Wasp culture that had long ruled New York’s social scene. It loudly raised a turned-up thumb to the moneyed establishment by interpreting their preppy styles through the lens of excess and entitlement. Comically proportioned suiting, pinstripes and suspenders, ice-cream-color knits and puff-cream evening dresses were the uniform of a new free market.

These power-broker suits and outrageous eveningwear looks are reappearing on the runways of women’s and men’s fashion shows for spring and fall 2020. There were taffeta puff-sleeved dresses at Rodarte and Khaite and sharp suiting at Alyx, Sies Marjan and Vuitton. Alexander Wang and The Row reexplored for spring the kind of American sportswear popularized by Ralph Lauren and Donna Karan, while Balenciaga in its spring women’s show captured the banality of yuppie office life, sending models down the runway wearing office ID lanyards. Pearls, also a yuppie favorite, have received a rare endorsement of cool from Comme des Garçons’ Rei Kawakubo, who linked with Mikimoto on a range of seven styles released last month.

To the unknowing Millennial and Gen-Z eye, this era of Alpha males and elitism registers as quaint — representing a time before cell phones and e-mail that beheld styles so outrageous they are ripe for repurposing with irony. “They don’t have the memory of the deep codes of the Eighties that were so white. The Eighties yuppies were people who were trying to display their wealth, they were trying to emulate what they may have seen in old money. It is one of the trends that hasn’t been recycled, yet it’s also well suited to photographs — it’s generally really graphic and bright,” said Kristen Richardson, author of the recently released book “The Season: A Social History of the Debutante,” which touches on yuppie-era social behavior. 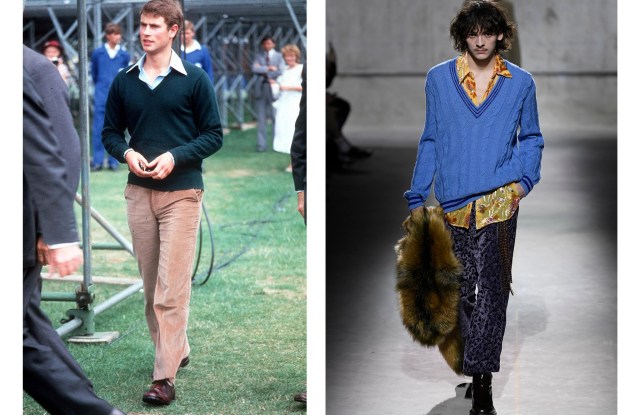 There was no better place to observe the yuppie’s new broad-scale appeal than at Belgian Shoes’ first sale last month, where financiers, artists and creative types stood shoulder-to-shoulder in a line that snaked down a Midtown block — all vying for the same hand-stitched, preppy slippers. The heritage brand, founded in 1955, has in the last few years found appreciation from creative types for its craftsmanship and old-school panache, while financial types see them as a comfortable shoe with ties to old money. The brand is so protected that it is said to repeatedly decline requests for high-fashion collaborations — likely why, in 2017, it was imitated by 1017 Alyx 9SM, which developed its own “Belgian style” version called the St. Marks Loafer.

“It’s this kind of little cult following. People love being in-the-know and not everyone is aware of who makes their shoes. There’s a limited production and the lack of overexposure to this brand and they like that,” the brand’s general manager Pana Diamantopoulos said of its new popularity among young consumers. 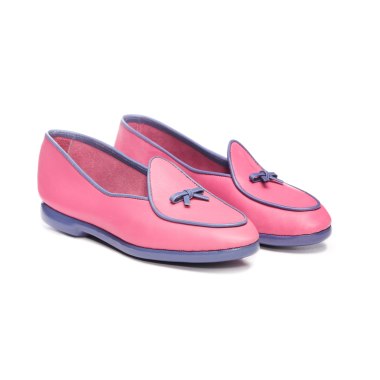 This return to polished Americana has similarly given new popularity to prim cardigans (like those by the new brand Leorosa) and chore dresses and fusty nightgowns (found at Brooklyn Heights cult store Salter House). Young urbanites are finding a certain novelty in yuppie haunts of yesteryear, shopping for headbands at Upper East Side pharmacy Zitomer and posting photos from dinners at Keens Steakhouse.

Elements of yuppie culture and its fascination with status and money have again begun infiltrating daily life. Instagram has almost single-handedly fueled a new obsession with wealth — giving the Hadid and Kardashian families a platform to showcase their lifestyles and inspiring countless others to dispatch photos that create an aura of money, ushering in an endless digital scroll of logo designer bags, truffle shavings on food and bikini-clad vacations.

There is a certain fascination and self-deprecation incurred in digesting these images, not unlike viewer response to the rich-kid antics that play out on HBO’s cult series “Succession” — a show that has become an obsessive watch, inspiring both admiration and revulsion in many. Not to mention how discussion of venture capitalists has become commonplace in the Millennial vernacular, evoking the yuppie-era’s competitive, entrepreneurial spirit. This winter, the Lower East Side indie cinema Metrograph says that yuppie-era films like “Metropolitan” and “Working Girl” sold out in less than an hour. 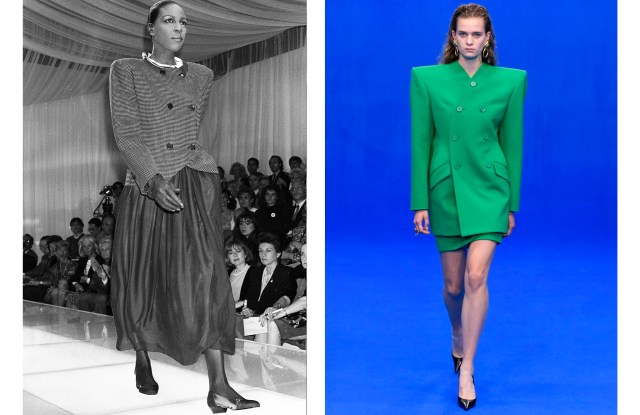 “Its something that happens in the cycle of how we display wealth — when there is mass social stratification and people don’t have any money — like during the Depression we had this huge tabloid readership and this is kind of similar to that — there is an interest that is also demoralizing,” said Richardson.

Puppets and Puppets designer Carly Mark, who was inspired by the suits and yuppie pageantry in “American Psycho” for her brand’s spring 2020 collection, conceded that “I think decadence is back, rich is cool now. I have been here [in New York] for 13 years and that was not the case for a long time.”

Puppets and Puppets’ well-received sophomore collection shown during New York Fashion Week in February was a mash-up of references that explored opulence and oppression. Mark and codesigner Ayla Argentina looked to anti-hero Patrick Bateman of “American Psycho” for ideas in suiting — a style they appreciate for its genderless appeal as well as its ties to the moneyed establishment.

“There is a fascination with 9-to-5 culture. It might be that my generation in New York doesn’t do it so we fetishize it,” Mark said of her attraction to Bateman’s wardrobe.

She isn’t alone. This winter, lower Manhattan appears to be switching out classic jeans for an unlikely new trend: slacks. Vintage styles as well as newer ones by Bode and Maryam Nassir Zadeh are styled with vintage collegiate sweatshirts, broad wool overcoats, baseball caps and vintage pastel cable-knit sweaters sourced on The RealReal and eBay. 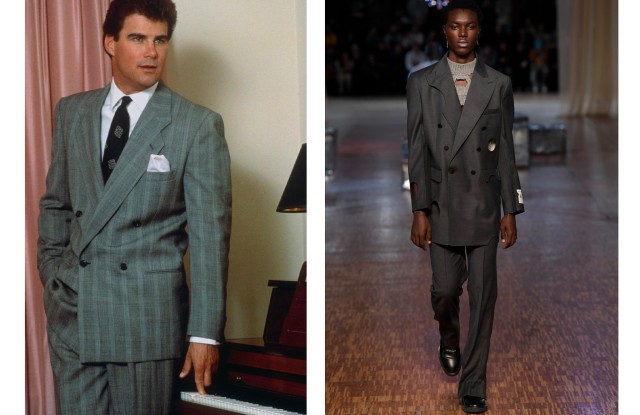 A double-breasted suit from 1990 and Off-White, men’s fall 2020.  Globe Photos/Shutterstock and Giovanni Giannoni/WWD

Chickee’s Vintage, a Williamsburg, Brooklyn, N.Y. store that counts Zoë Kravitz and the design teams for The Row, Ralph Lauren and Christian Dior as clients, has become a go-to resource for slacks by Giorgio Armani and Escada. Owner Kathleen Sorbara has seen a change where “I used to sell so many vintage Levi’s and now I’m selling a lot more of Eighties blouses and a lot of Eighties and Nineties slacks. Those are the two biggest sellers right now.

“What was the soft Seventies vintage T-shirt and tight 501 Levi’s a couple of years ago is now moving into more oversize Nineties jazz Ts and a nice pair of slacks and Gucci loafers or a blouse,” Sorbara said. She attributes the change to comfort. “A lot of the shop girls that work for me are saying ‘2020, baggy clothes.’ I don’t think anyone is wanting to wear super-tight stuff anymore.”

Yuppie nostalgia has also begun finding popularity among streetwear fans and the new-moneyed tech elite, both of which are gravitating toward dressier looks after years of unbridled casualness. 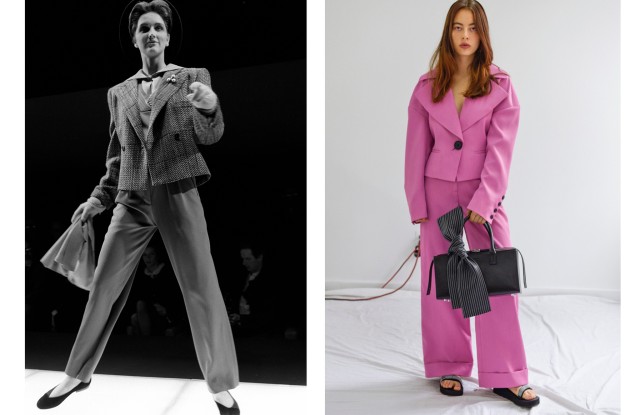 Streetwear, most notably, has turned a corner toward a dressier look. Heron Preston told WWD this past spring that his generation of designers “are growing up and looking for something a little more polished.” His compatriot Virgil Abloh controversially proclaimed in December that the entire streetwear category would “die” at some point in 2020.

While the streetwear trend may quiet down, at present it appears to be evolving — bringing more formal cues into its fold. New York streetwear label Aimé Leon Dore helped initiate the first seeds of change with its collection of sold-out loafers, which were quickly snatched up by men who would have otherwise been considered sneaker heads, pairing the shoes with their trusty sweatpants and hoodies.

Sorbara said there is a certain balance involved in this shift: “I think that streetwear has kind of introduced more comfort into my wardrobe. Now I’m realizing, ‘Oh, OK, I can’t walk around looking like a bum all the time.’ I am shopping for more button-downs and nice slacks and still have a nice sneaker to go with it.”

Titans of the tech sector may not be at the forefront of trends, but they do appear to be drawn to dressier styles. Just look at the popularity of Brunello Cucinelli among the Silicon Valley billionaires, led by the alpha male of them all, Jeff Bezos. Cucinelli fits the yuppie aesthetic perfectly: dressy, but not too formal — and phenomenally expensive.

Metrograph cinema founder Alexander Olch, who also owns a namesake line of formal neckwear, has observed the trend in his store. “People who are successful in whatever field are really caught between a set of extremes. They are not particularly interested in dressing up or have knowledge about suiting. But they are also not interested in dressing down in such a casual way,” he said.

“That is where the appeal of yuppie iconography is starting to land because it’s a look that is accessible and feels novel. It harkens back to an era that at this point feels kind of old-fashioned. The 24/7 nature of our tech culture, which brings with it accessibility and quick purchasing, has created a sort of homogeneity of style. I think it’s created an atmosphere where people want to find something from the past that’s more original and appealing.”