Fashion, you've got to love it. 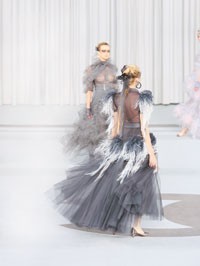 Fashion, you’ve got to love it. On one hand, it wasn’t all that long ago that insiders thought mass had no class whatsoever. Now everyone — designer, editor, the kind of woman once called a clotheshorse — flaunts cheapo affiliations and personal purchases with the same proletarian pride with which one might mention a recent ride on the 6 train. On the other hand, there is haute couture, that great bastion of exclusivity, which finds itself suddenly in a state of full-blown, glorious revival.

At Chanel, Karl Lagerfeld worked the notion that couture is indeed something of a magic-carpet ride of extravagance, showing on a huge gray rug — emblazoned with a double-C, of course — which was rolled out by a quintet of beautiful boy-toy types in faux-utilitarian black jumpsuits. But to acknowledge that this fantasy world come true requires a large, remarkably skilled assortment of people, for the finale a huge curtain at the end of the runway was raised to reveal Lagerfeld sitting on a block of seats with his entire atelier.

The collection their leader had just presented was at once extravagant and controlled. In merch-master mode, Lagerfeld showed no dearth of day clothes, opening with a red, white and black tweed dress worked into car wash strip-like fringe at the hem. Such flaps were a major theme in a lineup that featured other nods to geometry in graphic seaming and a decided focus on the waist, often cinched with wide patent belts. These day clothes came in two lengths, shorter and shortest, the latter in a pink suit with a somewhat conservative jacket atop a skirt, brief enough to make Britney Spears blush had it not been worn with opaque black hose.

As for evening, remember three seasons ago, when Lagerfeld’s couture featured only black coats with hidden, increasingly elaborate linings? Not this time, honey. This season seems to be all about flaunting the craft of couture, and why wouldn’t Karl want in on the act, especially since Chanel bought — and thus saved — all of those specialty ateliers? So he decorated to the nines, yet with utter control, clothes that radiated equal parts high chic, good taste and dollar signs. A little black dress might sport a proper flurry of white feathers at the neckline and hem, or an intricate compilation of fringe, flowers and a fabric of engineered tonal stripes. For those events when black tie really means black tie, the offerings were as diverse as full-skirted tulle affairs done up this way or that, a bi-level froth of white tiers and pink ribbons and a pale aqua crystal-encrusted gown that morphed from a jeune fille collar into a serious siren number.

That mood — young, but not excessively so — permeated the collection. But then, Lagerfeld has made cross-generational appeal as much a house standard as a camellia or a chain-handle bag. Of course, the ladies will love it. And so will the girls, including fresh-faced, pink-haired Rachel McAdams, who took copious notes from her front-row perch.

At Christian Lacroix, the house standard has been exuberant fantasy, which Lacroix has recently reined in a bit without sacrificing the true essence of his work: its emotional extravagance. The collection he showed on Tuesday provided a brilliant sighting of that deft transition (not to mention the Falic brothers’ apparent willingness to ante up for couture), one that has added fresh relevance to his remarkable artistry.

Lacroix opened with full-hipped, full-skirted frocks that fluffed toward his Eighties pouf days. But hyper-construction gave way to the gentility of an unconstructed crushed organza jacket with butterfly appliqués, and the utter whimsy of a mile-wide plaid schoolgirl trench, antithetical to any standard notion of couture. Delightful, to be sure, but an aberration, as more often Lacroix worked within the traditional vocabulary of couture, to breathtaking results. He varied volumes, contrasting structure with flou, and deflating a little balloon dress in front while retaining the air in back.

Yet it was his grand evening clothes that Lacroix diversified the most. So for every lavishly puffed, fluffed, bustled wonder targeting the trust-fund bride, there was an equally exquisite yet more versatile gown in flowing silks with a tiered or petaled skirt. Each one a dream, but a dream come true.