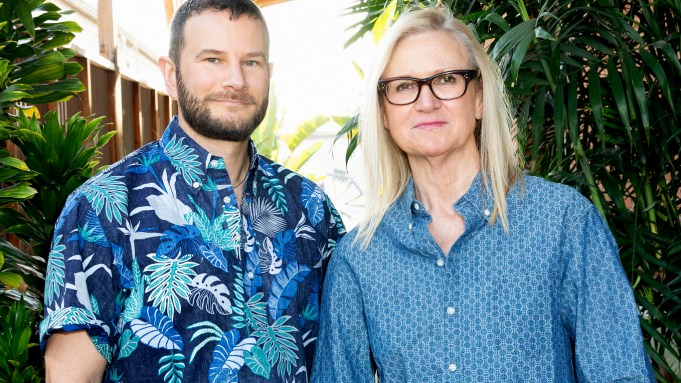 The business, founded by Reynolds McCullough on Catalina Island in 1949, has moved from Honolulu back to Southern California, taking up residence in a 6,000-square-foot industrial-chic building in downtown Los Angeles with new chief executive officer Lynne Koplin and creative director Doug Burkman at the helm.

The design team is hoping to ride the wave of men’s wear’s Hawaiian shirt trend into spring and beyond by offering new, slimmer fits; more cosmopolitan-looking mini-floral and bandana prints, and rayon fabrications. It is also expanding into shirting and pants with solid colors, as well as swimwear, and in 2020, women’s wear.

“We’re trying to maintain the Aloha spirit, but be less Waikiki and more cool, great summer prints guys can get into,” said Burkman, who was the designer (with brother Ben) of the eclectic New York-based Burkman Bros. men’s wear label, now on hiatus, which counted Kanye West, James Franco and Ashton Kutcher as fans.

This follows a high-fashion capsule collection with Japanese brand Sacai for fall 2018 that put Reyn Spooner bandana patterns on pajama pants and fabric-back cardigans sold at Dover Street Market. Several other Reyn Spooner collaborations are planned for 2019, one with longboard surfing icon Phil Edwards, and another a National Parks series. The brand even has a new #MeToo-era-approved mascot; the Tahitian-inspired Tapa to replace the Wahine, who was topless until the Nineties when Nordstrom merchants insisted she get a bikini.

Koplin came on board two years ago after a career of building resort lifestyle brands — Tommy Bahama and Anne Cole among them — and a foray into premium denim at True Religion and J Brand. “The goal was to move it back to California without losing its DNA, while maintaining the archive and art studio in Hawaii, where we have seven retail stores,” she says of Reyn Spooner, which is owned by L.A.-based Aloha Brands and selling at 300 retail doors, including Nordstrom, Amazon, East Dane, Stag Provisions and through a Japanese licensee, United Arrows and Ron Herman. “The key to making this business successful is making it more relevant than just six months a year, but still capturing that attitude of the tailored Hawaiian shirt.”

Looking to heritage names Pendleton and Liberty of London as models, she is balancing modernization with the Aloha brand’s history, which includes a library of more than 1,000 original prints by Hawaiian artists and loyal fans with online handles like “Bald Dad” who swap shirt stories on the brand’s official Facebook fan-club page.

She found in Burkman someone with a more tailored, East Coast sensibility, who appreciates the old and new. Even before this gig, the designer was a vintage Reyn Spooner collector with a color-coded closet full of shirts from the late Eighties to early Nineties, including one in the elusive Mickey Mouse print. From his New York apartment (where he even had shirts stashed under his bed), he reached out to Koplin through LinkedIn about opportunities with the brand. In 2017, after freelance creative director Jade Howe departed, she gave him a call to see if he’d be willing to move West.

“When I said my dream is to open a creative commune in Hawaii, where Japanese tour buses can stop and have a DIY shirt moment, then eat at a restaurant with food from an organic garden, I think it sealed the deal,” Burkman said, laughing. So far, he’s settled for downtown L.A., where he is living the Millennial L.A. carless lifestyle.

“This is a new creation we call Year of the Boar,” he said, inspecting a muted, hand-sketched boar and leafy foliage print shirt pegged to Chinese New Year, a design that keys into the brand’s collectibility still in evidence on any given month at the Rose Bowl flea market. “Our sphere of influence is Pacific Rim, so we’re looking at Japan, Hawaii, L.A. and Northern California for inspiration,” added Koplin.

“For swim, we have solids, or print shorts and matching print tops so you can have the cabana set like Justin Bieber,” Burkman noted. “We have three fits of shirts — the classic popover that’s been running since the beginning of the brand; his brother, which has a full placket and the same silhouette, and now a new tailored fit.” The collection retails for $44 to $138.

Before Reyn Spooner became synonymous with plumeria and pineapple prints, the brand’s beginnings were actually in tailored clothing. In the Forties, when McCullough returned from World War II service, he started working at a men’s haberdashery near his home on Catalina Island, eventually buying out his employer and operating six Reyn’s Men’s Wear stores in Southern California. On his first trip to Hawaii in 1957, he fell in love with the lifestyle. He moved his family to Oahu, opening his first store in the open-air Ala Moana shopping center in Honolulu 1959 “with the idea of bringing constructed, tailoring clothing to Hawaii,” Koplin said.

At first, he refused to sell Aloha shirts in his stores, thinking they were too loud. Then he discovered an inside-out printing technique that created a more muted effect. Partnering with local custom board-short seamstress Ruth Spooner in 1961, he married her skills sewing prints with precision, with his preppy classic button-down Oxfords, now in inside-out prints, for an East Coast-meets-Aloha look. It was such a success that in 1962, the brand began outfitting members of the Hawaii House and Senate for what became known as Aloha Fridays.

At the height of its popularity, the brand had 12 of its own stores, as well as a factory in Waimea. McCullough died in 1984, and his son Tom ran the business for many years, selling it to Wedbush Capital Partners in 2007 in a bid to expand globally. The brand has had several refreshes since then, including one by former Nike creative director Gordon Thompson, who helped land it in Opening Ceremony and Urban Outfitters at a time when consumers were rediscovering American heritage labels. Reyn Spooner was acquired by the current group of investors in 2014, led by chairman Charlie Baxter, himself an Aloha shirt enthusiast.

“For the first few years…we brought in a freelance creative director working out of Orange County. But it wasn’t going to work that this was going to happen in Orange County,” said Koplin. “I wanted to be in L.A. and have something of a connection to Reyn McCullough. We chose a brick building for the new headquarters because Reyn’s first store was brick. Before that, in the Thirties, it was a bakery and Reyn’s father was a baker. So it’s all connected, and everyone we’ve brought in so far has a connection. It’s about bringing in people who love the brand and want to take it where we want to go.”