Designers just can't get enough of feathers. From shifts with tiers to light-as-air "Swan Lake" numbers, avian confections keep migrating back into fashion, as seen in this look from Diane von Furstenberg. 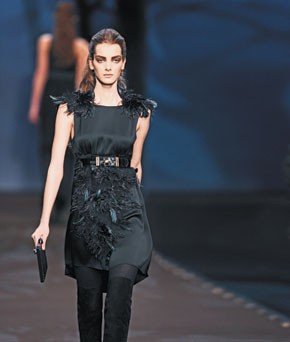 Designers just can’t get enough of feathers. From shifts with tiers to light-as-air “Swan Lake” numbers, avian confections keep migrating back into fashion.

Fendi’s Karl Lagerfeld went into the woods for fall — literally. Against a wintry forest backdrop, he sent out a collection full of nature references, including appliqués and furs with leaf motifs and all manner of feathers. Here, his plumed, belted dress.