One of Riccardo Tisci's designs for "7 Deaths of Maria Callas."

LONDON — COVID-19 has failed to stand in the way of a long-planned collaboration between Burberry’s Riccardo Tisci and his old friend Marina Abramović which saw the designer create costumes for the artist’s latest opera project, “7 Deaths of Maria Callas.”

The opera, fruit of Abramović’s lifelong study of the American-born Greek soprano, had its world debut Tuesday night at the Bavarian State Opera in Munich. 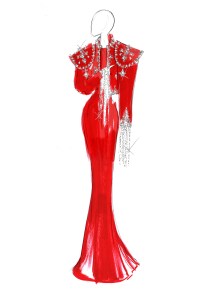 One of Riccardo Tisci’s designs for “7 Deaths of Maria Callas.”  Image Courtesy of Burberry

“7 Deaths” looks to illuminate the tragic fates of Callas’ characters and the life story of the famous diva. Abramović directed the work, designed the set, and also appears on stage as various characters.

She collaborated with actor Willem Dafoe on a film created for the world premiere. “7 Deaths of Maria Callas” will also be performed in Berlin, Athens and Paris in the coming months.

Burberry said that Abramović and Tisci looked to the theatrical costumes of opera and reinterpreted them through a modern lens, with the designer attempting to “reimagine historical notions” of masculine and feminine style.

“I am a romantic dreamer at my core, so this was a very easy project to get involved with. The subject is one of love in all its forms, from the light to the dark,” Tisci said.

“Marina is one of my great personal loves and I feel privileged to call her my friend, and my family. She is one of the world’s most daring and brave artists, and it’s an incredible honor to collaborate with her once again on a subject that is so close to both of our hearts.”

Abramović said she had wanted to make “7 Deaths” for 30 years, and that Tisci was a natural choice. “To die from a broken heart is the thread which draws together each opera in a project which is centered around love and its forms, as much as my relationship with Riccardo. 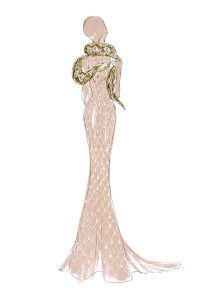 One of Riccardo Tisci’s designs for “7 Deaths of Maria Callas.”  Image Courtesy of Burberry

“When the opportunity for this project started to become real, there was no other team I wanted to work with: Riccardo had to make all the costumes because we are love. He is fashion and I am art, two worlds that cross over in a creative dialogue of love, respect and freedom.”

The opera scenes are performed by a variety of singers including Selene Zanetti, Adela Zaharia and Hera Hyesang Park. Abramović also plays various characters on stage as they die.

For the “Tosca” one, he made a beige Chantilly lace and silk crepe de chine negligee with pearl embellishment and polished metal shoulder straps. The silhouette is embroidered onto panels of sheer organza, and worn with stilettos.

The project has been in the works for a while: Ahead of the Burberry show in February 2019, Abramović, said she had talked in-depth to Tisci about the characters before the project got started.

“He will have total freedom in what he designs. Our collaboration is one based on trust. Riccardo doesn’t work well when he’s restricted,” she said from her front-row seat.