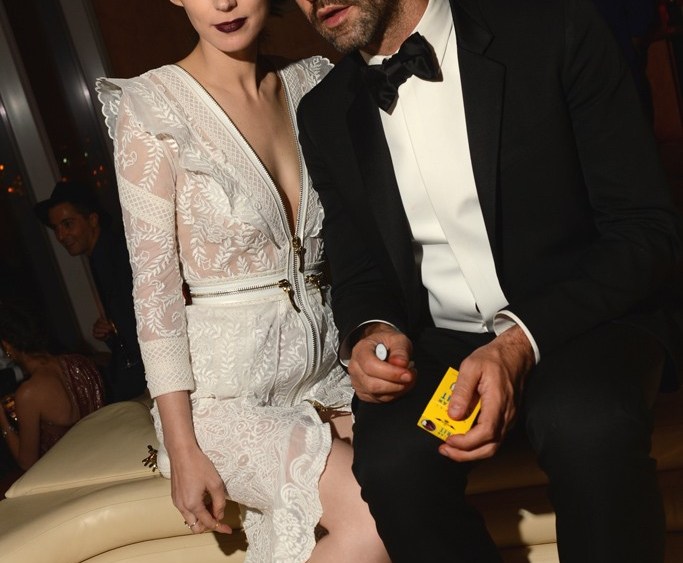 If there was any doubt that now is Riccardo Tisci’s moment, it was put to rest once and for all at Monday night’s Costume Institute benefit. The Givenchy designer, who was one of the night’s cochairs, dressed 13 guests for fashion’s biggest night of the year.

The range of types — from Marina Abramovic to Florence Welch to Amanda Seyfried — demonstrated just how versatile the designer’s creations for the French house can be. Wearing Givenchy haute couture, for instance, were Debbie Harry, who rocked a printed and embellished T-shirt for her performance; Madonna in a studded, embroidered jacket paired with little else but shredded fishnets; fellow cochair Rooney Mara in an ivory hand-embroidered tulle dress, and Beyoncé in a python corset and long skirt with a flame motif and cutouts. Carine Roitfeld, meanwhile, stunned in a Bambi-print sweater and transparent skirt straight from the house’s fall ready-to-wear runway.

RELATED STORY: Anarchy at The Met as ‘Punk’ Makes Its Debut >>

Several men also got the Givenchy treatment, including Pedro Almodóvar, Frank Ocean, Brahim Zaibat and Kanye West (as well as Tisci himself, obviously). On the subject of West, not everyone embraced his baby mama’s Givenchy look. Tisci’s maternity effort for a very pregnant Kim Kardashian — a custom skin-tight floral dress — was panned almost as soon as she stepped on the red carpet, and by Tuesday morning, photos began circulating on the Web likening the reality TV star to a chintzy upholstered sofa.

On Tuesday afternoon, Tisci got on the phone with WWD to reflect on the night and the celebrities he dressed.

On the event:
“It was an amazing moment, but I was really stressed about this in the beginning. I went to the Met the first time two years ago for the celebration of the Alexander McQueen exhibition. This time, Anna [Wintour] asked me to be cochair and so, for me, it was important to get a table and seat it with people who make me feel like home, like a family. It was really interesting. ‘Punk’ was not an exhibition about me. I would have loved to have invited many more people that are part of my gang, so I needed to choose the women and men that, for me, represented punk in my own way. When we were all seated, I got goose bumps. It was a very emotional moment.”

On dressing Harry:
“To work with her was amazing, because it doesn’t matter what age people are, if you’re born an icon, you die an icon. She is so cool, so confident. She knows what she wants and that’s what always makes me fall in love with people. It was so easy to dress her. She pulled the look off in such an amazing way. I wanted to represent punk as a T-shirt and we decided to do it with gloves and boots. A jacket, high heels and a T-shirt as a dress…it was a real sign that she started in the punk moment, but we did it in the 2013 fashion of Givenchy by Riccardo Tisci.”

On Mara’s ivory gown:
“Rooney was fantastic. Like Madonna, Amanda Seyfried, Beyoncé and Carine Roitfeld, I have a real relationship with Rooney. She is superintelligent, superelegant, supercool. She is not a girl who easily gives a smile and talks to everybody. I have already worked with Rooney for three years and I know what she loves. She’s like me. She really represents my style. She loves the romantic side of me, and she loves the hard side of me. For last night, I said, ‘Rooney, we should really push more to be sexy, because you have the face and the body to be sexy,’ and she said, ‘You know what, we should go for it.’ For me, the punk moment was the cleavage — a very big, open V-neck dress. She was very punk in her own way. It was funny. On the red carpet, everyone photographed us as bride and groom. It was very cool.”

On Beyoncé’s second Met outing in Givenchy:
“Beyoncé said, ‘I want to look really good like last year, but I want to look different.’ She was like a rock girl with the flame, the boots, the gloves, the corset, the animal. For me, she was a sexy goddess.”

On Madonna’s red-carpet-stealing getup:
“To me, Madonna was the queen of punk last night. Madonna and I did the red carpet together. We did interviews together. We collaborated. With women and men, I like to sit down and talk about what we want to do. I don’t like to be lazy and just take a dress and say, ‘This dress is nice, I am sure Madonna would wear it.’ I am very honest with them. I am not just dressing them to send clothes but to celebrate their beauty and talent.”

On Kardashian’s dress and its critics:
“She is a really good friend, and I am very happy she came to the Met for the first time. I love Kim. Doing maternity was fantastic. I wanted to have a Kim Kardashian moment, because Kim always supports me. She is the future wife of a really good friend of mine. I wanted to have a moment of family…Kim, Kanye and the baby. It will be a family that I will be close to. Kim said, ‘Ricky, I love what you’re doing so much, I am in your hands.’ I said, we should give her our punk moment with a romantic beautiful flower-printed dress. I have dressed many pregnant women in the past. People can say what they want. To me, pregnancy is the most beautiful thing in the world, and when you celebrate something, you give people flowers. I think she looked amazing. She was the most beautiful pregnant woman I dressed in my career.”