Richard Rosenfeld Looks Back at His Lengthy Career in Fashion Illustration

The fashion illustrator started his career at WWD in 1967 and has continued working and teaching in the decades that have followed.

Richard Rosenfeld found his way to WWD as a student at Parsons School of Design in 1967.

Accustomed to looking at what was then a newspaper, and routinely using it as resource for his undergraduate studies, he knew how fashion art was an essential component so he arranged to show his portfolio there. “It was the first job of my career after graduating. I had excellent teachers at Parsons, and my favorite was Katarina Denzinger, who worked for Harper’s Bazaar. Her approach was very contemporary, graphic and modern. She was emulating how the models were posing in photos. It was the miniskirt. It was modern. It was angular,” he said.

Early on at WWD, Rosenfield said he didn’t get many assignments because his style was not like that of Kenneth Paul Block and the other on-staff illustrators who were adept at sketching society women. More prone to sketch graphically, Rosenfeld said he was more influenced by “The Yellow Submarine” and The Beatles.

Initially working as a WWD freelancer, Rosenfeld said after he landed a story about hippies in Seventeen magazine, he told WWD’s then-art director that Seventeen was hiring him. “This was very brazen of me. Unless you give me work, I’m not going to sit here five days a week. I’m going to quit,” he said. 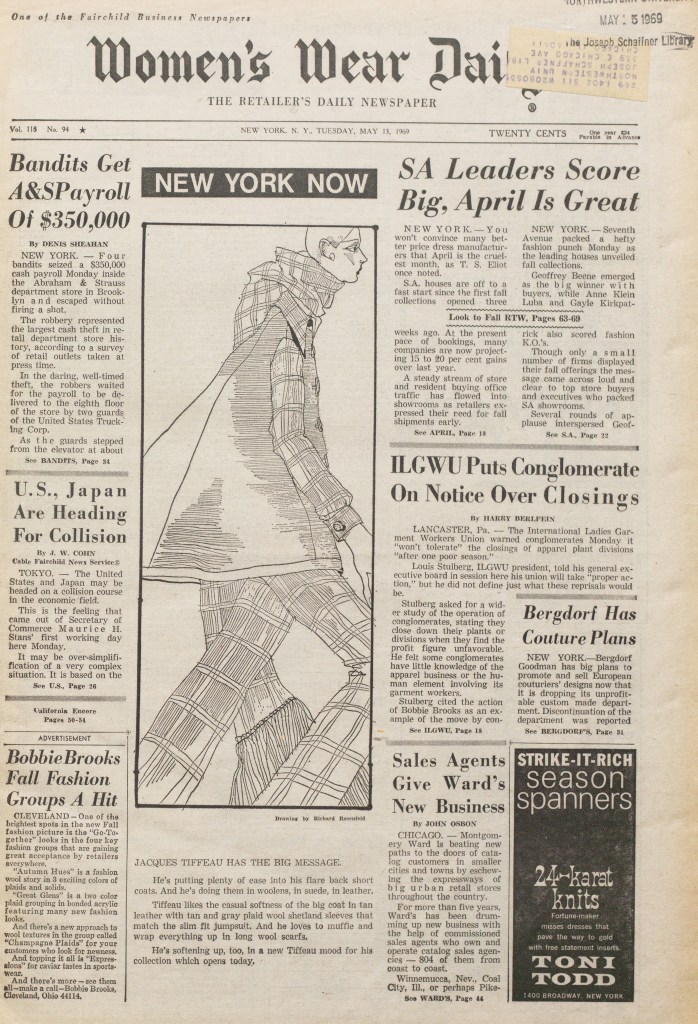 From there on, the beauty editor started giving him work and gave him full creative license to do whatever he wanted and to embrace the conceptual, since they were selling beauty projects. Rosenfeld came up with full-page Pop Art-inspired graphic drawings and figures. One favorite was a cover image that he drew of an Art Deco-looking girl walking down a set of stairs. Another was working on the “Best of New York” section with Steven Stipelman.

At WWD, illustrators worked from designers’ sketches. “The clothes did not exist. We could take liberties. It was very editorial. The clothes were not made yet…there were no models. We pretty much had to make up everything,” Rosenfeld said, adding that Block was the exception as he was sent to Paris to draw from the runways.

Well aware that fashion illustration is not seen in print any more, Rosenfeld said it would be hard to explain to someone with no knowledge of fashion illustration what it is. “It’s fashion that’s not photographed. I think that is the only way that I can say it,” he said.

His work with WWD prompted executives at Joseph Magnin to contact him to see if he would fly to San Francisco to interview at the specialty store. “They flew me out. The store did full-page and quarter-page ads in The [San Francisco] Chronicle that were very graphic and unusual,” Rosenfeld recalled, adding a job was offered on the condition that he relocate to San Francisco.

After accepting the job, he left WWD after a two-year stay in 1969. On the West Coast, Joseph Magnin was heralded for its advertising and attracted a younger customer than the more high-end I. Magnin. Joseph Magnin operated stores in Century City, Palm Springs and Hawaii at that time, said Rosenfield, who spent decades teaching in the fashion design department at the Fashion Institute of Technology and Parsons, since fashion illustration went by the wayside. He retired from FIT five years ago. 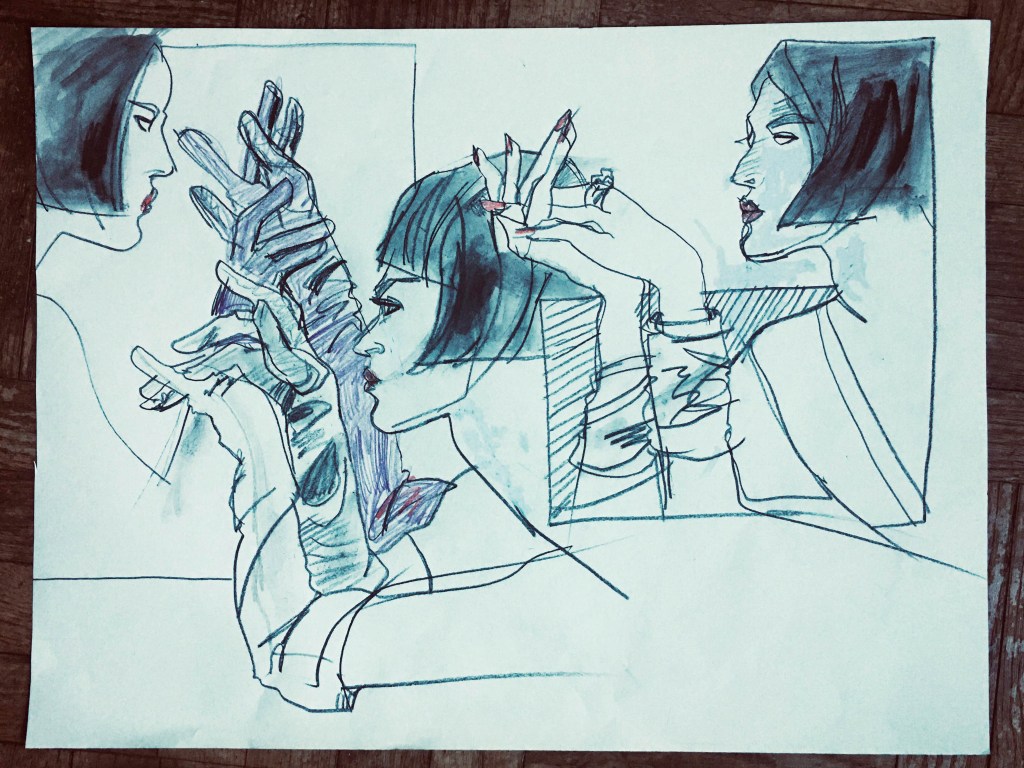 At WWD, Rosenfeld developed his signature style, namely because he was given the freedom to do whatever he wanted. In addition to Denzinger, Rosenfeld said he was influenced by photographers like Helmut Newton, “because he was so graphic. He also was one of the first photographers to photograph women in natural settings like cafes.” Rosenfeld borrowed a page, so to speak, sketching a model sitting on a bench for WWD in the late Sixties, which was then novel.

Fellow fashion illustrators Antonio Lopez and Block were sources of inspiration, he said. Block’s fluidity was unmatched and “he drew from the model so you could see the body underneath the clothes,” Rosenfield said. At WWD three days a week, Block spent the rest of his time doing ads for Bergdorf Goodman, Bonwit Teller and other retailers.

Following a yearlong stay at Joseph Magnin, a recession set in, and Rosenfield exited the company to relocate to Dallas and Neiman Marcus. A year later, he returned to the East Coast to take a job at Condé Nast at Glamour Magazine Promotion, an in-house advertising agency that would pitch sales to advertisers. “I would do illustrations. We did forecast reporting. It was really a big tie-in for advertisers,” Rosenfeld said. “When I worked for Glamour, I freelanced for Vogue, Seventeen and Mademoiselle magazine, which is not around anymore. And Franklin Simon, a department store, whose advertising looked exactly like Joseph Magnin’s. It was the same art director and it was very graphic.”

Fashion illustration is not coming back from Rosenfeld’s perspective. “There are two reasons. Magazines are not selling. There is not a lot of print. And women, who look at fashion, are seduced by the photo and the celebrity. The celebrity is selling the clothes, even in makeup,” Rosenfeld said. “They simply don’t believe a drawing. They have to see a photo. And they want to see it on a celebrity — on a singer, on a movie star, a celebrity.” 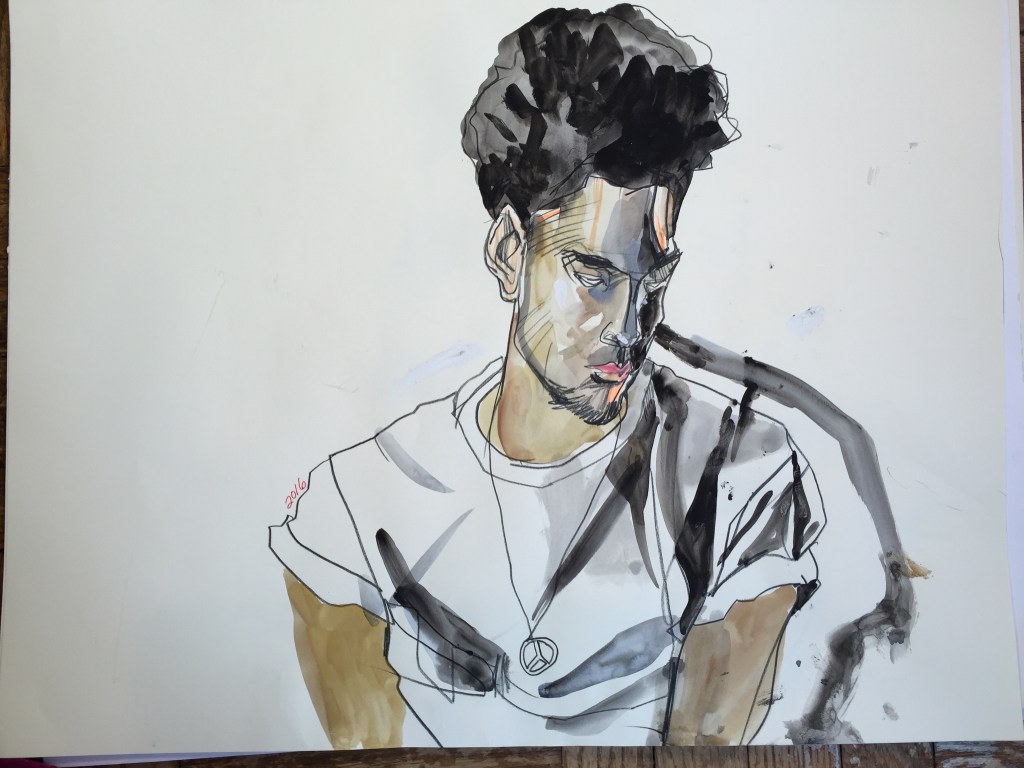 Sketches from Richard Rosenfield that were created in 2016.

Another factor is the move to feature a greater variety of body types, races and ethnicities, as well as models-turned-celebrities, Rosenfield said. David Downton is the only current illustrator, who he singled out for his expertise. “He does work for Vanity Fair. He does celebrities and they look just like the celebrities,” Rosenfeld said.

The way he sees it, the demand today for fashion art is “relegated to fine artists and not fashion illustrators. The images are not about idealization — no more rich, white society women as the ideal,” Rosenfeld said.

Should fashion illustration ever return, Rosenfeld doesn’t expect it to look anything like it once did. Italian Vogue’s all-illustration issue earlier this year also earned his kudos even though the magazine hired fine artists like David Saul versus fashion illustrators to do the work. Another issue that was drawn primarily by children, including the cover, was “charming,” he said. “Italian Vogue has a very limited audience, and does extremely creative things.”

American Vogue’s September issue, which featured the work of fine artists Jordan Casteel and Kerry James Marshall also earned high marks for their portraits of real people, not models. “Fantastic covers — one featured a painting of a young Black designer on her rooftop. These were not fashion illustrators. They were fine artists who Anna Wintour chose to do this,” Rosenfeld said. “I had not seen artwork [in magazines] for years. They did this purposefully. Italian Vogue and American Vogue made a point of not hiring traditional fashion artists. In fact, they didn’t hire any fashion artists. They were all fine artists, which was interesting and very contemporary.”

Portraits and male figurative art are his current area of focus. Rosenfeld exhibits his work at the Leslie-Lohman Museum of Art in New York’s SoHo neighborhood that showcases gay, transsexual and lesbian art, he said. “It is the only place in New York that exhibits gay-oriented art. I’ve been exhibiting there for 30 years. They have had about 40 of my drawings at exhibits at that museum. It started as a gallery and now it’s a museum. It’s political, it’s photography — it’s all of that.”

Rosenfeld collaborated with Francisco Costa during his days at Calvin Klein in 2010. As the designer draped fabric on a house model, he would sketch the clothes as Costa created them. “When he hired me I said I would not draw from a designer sketch, that they had to be on a model. He agreed. He was absolutely the most wonderful person I’ve worked with,” Rosenfeld said. “One of the drawings appeared in Women’s Wear Daily. It doesn’t have my name on it. Designers put their names on it.”

Recalling how fun it was, Rosenfeld said Costa would sometimes drape fabric over items from previous collections, such as a coat that would have its pockets cut off and then patch them onto a muslin. “I would draw, the sample maker would come in, look at it, take it, and make it. The next day it was made,” he said. “It was fantastic. He would literally cut up some of the other clothes and rethink it. And the model was phenomenally beautiful — 5 feet, 11 inches.”