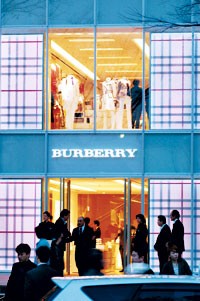 Brands including Burberry, Giorgio Armani and Marc Jacobs have opened or plan to open stores in the Far East in the next few months as the region continues to recover from the impact of last year’s SARS virus; the Chinese economy grows at nearly a double-digit rate and the core Japanese economy performs at a level not seen in more than a decade.

Burberry opened another flagship in Tokyo last week and plans to have more than 30 stores in China by the end of this year, while Armani is arriving in Shanghai this week for the opening of his Armani and Emporio Armani stores covering almost 12,000 square feet. Meanwhile, Louis Vuitton will open global stores in Tokyo, Osaka, Japan and Shanghai this year; Chanel will open a store on the first three floors of the 10-story, 66,500-square-foot Chanel Ginza Building in Tokyo in December, and Jacobs has announced plans to open his first store in China this fall, also in Shanghai.

“China is where all luxury brands are going,” said Dana Telsey, an analyst with Bear Stearns. “The Chinese are being more consumers of luxury. It is a good time to invest and the area will grow over time.”

Goldman Sachs has estimated that China’s luxury market is now worth about $2 billion, a fraction of its overall clothing and apparel market and only about 3 percent of global luxury goods sales of $65 billion. Clare Kent, luxury analyst at Morgan Stanley in London, has predicted that profits for luxury brands in China are at least five years away as wealth levels remain low among consumers and brands continue to face import duties of up to 35 percent on some products.

But luxe executives — like those in every other industry — remain eager to get in on the ground floor of the potentially huge Chinese market; Kent predicts the country eventually could rival Japan as a consumer of luxury goods. Meanwhile, the store openings and growing demand in Asia are among the reasons luxury brands are bullish in their outlook for 2004 following a strong end to 2003. Gucci Group, for example, said its organic growth in Asia was 25 percent last year.

“We are more confident in our forecast,” Patrick Houel, chief financial officer of LVMH Moët Hennessy Louis Vuitton, said last week as the group announced its best sales performance in five quarters. “We had a very good start to the year and we are much more optimistic than we were in December.”

Houel pointed to the more favorable economic and monetary environments worldwide, as well as the improving tourism and the expanding economies in the U.S. and the Far East, as contributing to the strong outlook. Even though sales of the Vuitton brand in Japan in the first quarter were flat, this resulted from increased travel by Japanese tourists to other markets.

“The Japanese luxury market has come back significantly in the last year, driven by the increasing consumer confidence, the rise in the Japanese stock market and the increased spending by Japanese consumers,” said Gilbert W. Harrison, chairman of Financo Inc.

Burberry’s opening last week on Tokyo’s Omotesando Boulevard — which is attracting the world’s luxury brands in increasing numbers — signaled the sector’s growing confidence about the all-important Japanese market, which, in some cases, can account for up to 30 percent of a luxury brand’s sales. Burberry’s chief executive officer, Rose Marie Bravo, and creative director, Christopher Bailey, flew over for the opening, which included a runway show and a dinner. The show was held at the Meiji Memorial Picture Gallery, the first time it was used for a fashion show, which was Bailey’s idea.

“Japan is our most important market and Tokyo is a very important city,” Bravo said when explaining why Burberry opened the store. “We felt we very much wanted a Burberry presence in Omotesando, and we wanted to position the brand amongst the other luxury greats.

“The Japanese market is one of the most exciting markets in the world,” Bravo added, then said she continues to be impressed with the sophistication of the Japanese consumers and their “great craving” for luxury and quality, along with their knowledge of brands.

She declined to comment on how much Burberry invested in the new store, but said it is “positioned at the highest level.” The company is working closely with its Japanese partners, Mitsui and Sanyo Shokai, to “give the market a vision of what the Burberry brand is around the world,” Bravo said.

James Hurley, the luxury goods analyst with Bear Stearns, said the key to the new store is it’s entirely funded by Burberry’s Japanese distribution partners, but the brand will have control over the merchandising and product.

Telsey said in her research note Monday that, although it is reasonable to expect Burberry to see its sales volume gains in Japan “naturally begin to moderate after strong double-digit growth over the last few years [during fiscal 2003, Burberry’s Japanese sales volumes rose an impressive 10 percent],” the luxury brand continues to “surprise on the upside.”

Telsey’s second-half, 2004 licensing revenue growth forecast “is consistent with the 10 percent growth that Burberry achieved in [the company’s most recently reported quarter]. Our growth in licensing revenue reflects the benefit of higher royalty rates in Japan, as well as the success of emerging licensed-product categories such as children’s wear, eyewear and fragrances.”

Japan isn’t Burberry’s only focus, however, Bravo said, pointing to the company’s plans to open more stores in China this year, with the goal of having more than 30 by the end of 2004. “So we have been very aggressive in many of the Asian markets,” Bravo said, then noted Burberry has recently opened two stores in Hong Kong, as well as new ones in Singapore, Kuala Lumpur in Malaysia and Australia.

Harrison of Financo said Burberry is a natural for the Chinese market. However, he questioned whether there were currently 30 locations that have the financial demographics to support a Burberry store, “but certainly, over time, this is something they can achieve.” Hurley noted Burberry is entering the Chinese market with local distributors, so it doesn’t have to invest its own capital if the program doesn’t work.

At the latest count, Burberry-owned, directly operated stores worldwide totaled 114, with 68 in Asia, 27 in the U.S. and 19 in Europe. In addition, there were 141 other stores and outlets owned and operated by Burberry’s license partners throughout the world, including the new Japanese unit.