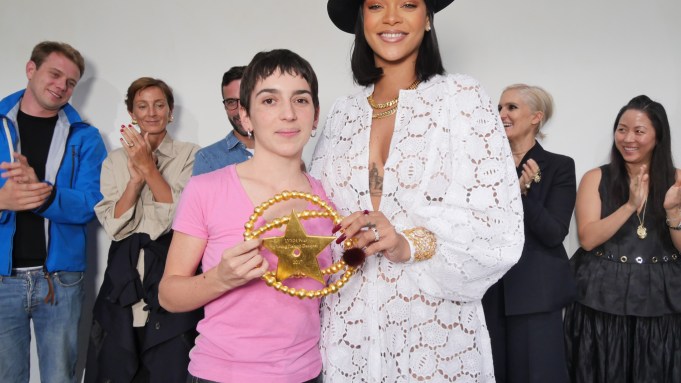 PARIS — French designer Marine Serre on Friday won the 2017 edition of the LVMH Prize for Young Designers, propelling the 25-year-old into the international spotlight only a year after her graduation from Belgian school La Cambre.

Serre beat some 1,200 applicants to walk away with a grand prize of €300,000, plus a year of coaching from experts at luxury giant LVMH Moët Hennessy Louis Vuitton, parent of fashion houses including Vuitton, Loewe, Givenchy, Berluti and Marc Jacobs.

The designer, whose team consists of three people, has just one collection under her belt. She has secured around 15 wholesale accounts for fall, including Dover Street Market in London and Opening Ceremony in New York, in addition to Space at Nordstrom and Canadian e-tailer Ssense.com.

“The idea is to grow, of course, but sensibly. I think you have to take things gradually. Five days ago, I had to turn away clients because I couldn’t produce more than 1,000 garments [this season,]” she said. “So I think this is going to help me a lot in that respect. It’s going to be much more fluid for me.”

It was the second accolade in two months for the precocious designer, who since March has been working alongside Demna Gvasalia at Balenciaga.

She was a finalist at the Hyères International Festival of Fashion and Photography in April, where Galeries Lafayette announced she would be its next guest designer, with a limited-edition collection to be distributed in selected stores from the retailer’s network as well as on its web site.

Serre is also competing for the Creative Label prize, worth €100,000, at the ANDAM Fashion Award, to be announced on June 30.

The crescent moon is a recurring element. “Of course, the symbol invokes centuries of Arab, Turkish and Islamic history. Radical Call for Love frames this powerful motive as a corporate sportswear logo, that most metaphysical, ideological element of secular consumer culture,” her collection manifesto said.

Serre had a more straightforward way to describe the appeal of her clothes.

“There are outfits that reference an almost traditional couture approach, alongside hybrid pieces that are spliced with sportswear, but in the end, they are very wearable. At the same time, they give off a certain elegance and sharpness,” she said.

Born in the Corrèze department in southwestern France, Serre lived in Marseille and Brussels before moving to Paris in September 2016. She credits her studies at La Cambre with forging her independent spirit.

“The training is based on a do-it-yourself approach and I think that really shapes you. It allows you to make contacts by yourself, to reach out to people by yourself and not to depend on help from others,” she explained.

Indeed, Delphine Arnault, the force behind the prize and a key talent scout at family-controlled LVMH, said the jury was impressed by Serre’s attitude.

“I’m very happy because she’s a woman, so that’s great, and she’s French,” she said. “She did an amazing presentation — extremely mature. Then when at the end we realized she was 25, we couldn’t believe it. She’s very mature, she’s very driven. We think that she has a great future in front of her.”

The jury awarded a special prize to Kozaburo Akasaka, whose first stand-alone men’s presentation in January channeled a punk rocker sensibility. He won a grant of €150,000 and a one-year mentorship program from the LVMH Group.

The Japanese designer, who is based in New York, presented items from his thesis collection Brutal Sensitivity, including jeans woven from recycled fabric. Each pair takes one-and-a-half months to produce and the shredded-look jeans retail for $3,000.

LVMH rewarded three graduates: Mariam Mazmishvili from La Cambre, Maija Meiro from Aalto University in Helsinki and Robert Wallace from Central Saint Martins in London. They will each receive €10,000 and will join Louis Vuitton, Kenzo and Céline, respectively, for one year.

Two jury members were missing. Marc Jacobs was unable to make the trip due to recovery from a surgery related to chronic ulcerative colitis, a spokesman for the brand said, adding that he has made a full recovery. Riccardo Tisci, who had been expected despite his departure from Givenchy in February, was a no-show.

The past three winners of the main prize are Thomas Tait, Marques’ Almeida and Wales Bonner, and the award has also boosted the careers of its runner-up special-prize winners: Hood by Air, Jacquemus, Vejas and Miuniku.

Arnault said the initiative stands to benefit even the six other finalists who walked away empty-handed. She noted that since Danish designer Cecilie Bahnsen showed her creations at LVMH’s headquarters in March, as part of the selection process, she has gone from 12 to 36 accounts.

“That’s also why we do the prize. It’s not only for the two winners, it’s also for each brand to gain more awareness,” she said. “To have to choose between the eight was very difficult, because they’re all super good and very talented, and they should reapply next year.”

Rihanna also underscored the finalists’ achievement. “Art has no walls or boundaries and is a force that cannot be ignored. It should be defended with courage and confidence. That is what we’re celebrating today,” she said.

“Hard work and a unique drive to create is why you’re all here, and this spectacular achievement in a rising career is what the LVMH Prize stands for. I want you to know that we are honoring all of your brilliant talents today, and making it here is only the beginning of a long and extraordinary journey.

“You designers are the future of fashion and I applaud you. From the bottom of my heart, congratulations, and don’t ever forget what you love, what inspires you and what has brought you this far,” said the singer, who has worn designs by previous winners Jacquemus and Marques’ Almeida.

French actress Isabelle Huppert has already posed in an outfit by Serre. An endorsement from Rihanna, who has 54 million followers on Instagram, would be only the next step on an extraordinary journey indeed.