Ringside Seat: The ‘Battle of Versailles’ in WWD’s Eye

Women's Wear Daily did more than give the fashion showdown its historic moniker — the paper was on hand to detail the blow-by-blow. 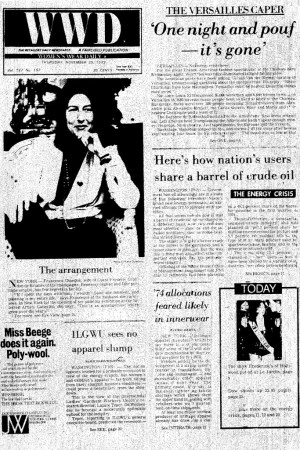 WWD did more than give the “Battle of Versailles” its historic moniker — the paper was on hand to detail the blow-by-blow, starting with Gerald van der Kemp, the curator of Versailles, who, WWD reported, had been fielding “embarrassing questions from the American press about the energy crisis.”

Oil embargo or not, van der Kemp concluded, the palace would be ready for the show.

This story first appeared in the July 9, 2012 issue of WWD. Subscribe Today.

Go on it did, as the hostess Baroness Marie-Hélène de Rothschild (who donated the tables, cloths, food and wines for the evening, estimated at some $70,000) reigned over an almost impossibly glitzy fete worthy of the court of Louis XIV.

WWD was there to watch the feathers fly, noting a dress-rehearsal foot-stamping snit from Halston (kept waiting for four hours) and a subsequent troop-rallying motivational speech from Oscar de la Renta.

“The French and American segments were as different as the Chateau of Versailles and the Seagram Building,” WWD reported. “The French had two orchestras, four conductors, enough scenery and effects for four bad operattas [sic] at the Opera Comique. The sets, by Jean-Francois Daigre, were so tacky they weren’t even camp….The Americans just brought a tape recorder and no sets…and the American mannequins knew how to move in the clothes they showed. The French just stood there bewildered while the acts went on around them.”

Rothschild openly complained that the Americans hadn’t spent enough money on their presentations.

Josephine Baker was there to headline for the French, and Liza Minnelli for the Americans. Zizi Jeanmaire performed during the YSL show. Dressed in drag, she danced with two of the models before “two fat men dressed like women came in and danced with [her],” she sang “Just a Gigolo” in English. “There were even strippers from the Crazy Horse Saloon,” WWD noted, “Only the clothes of Dior, St. Laurent and Givenchy were strong enough to surmount the spectacle.”

Those not so lucky? WWD was unimpressed by Ungaro, who featured an Alpine double-bass player “sawing away,” a “rhinoceros looming, pulling a gypsy cart” and “Jane Birkin in her undies followed by Louis Jordan as a pussy cat.” Of the Cardin presentation, WWD wrote only, “Would you believe a rocket in the forest at Versailles? Would you believe men in sleeveless jersey jumpsuits with vinyl jock straps? Would you believe thrust for takeoff?”

For all of Rothschild’s efforts (“One night, and pouf! It’s gone,” she told WWD), there were other parties to get to, and one with an even more exclusive guest list: Baron Alexis de Rede held what WWD called “the chicest party of all…a dinner for 50 at his private mansion.”