Francesco Fucci, head designer at The Row, and Henry Zankov, senior knitwear designer at Diane von Furstenberg, were among the advisors for the students — whose looks were wearable, saleable and well-edited.

By Katherine Bowers on May 9, 2016
View Slideshow 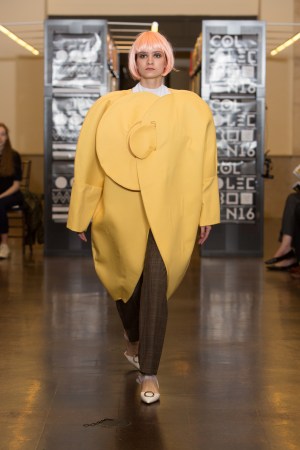 It was the culmination of a year’s thinking, editing, stressing and stitching as 19 seniors sent their thesis looks down the runway at the Rhode Island School of Design’s 2016 Collection.

The show took place in the RISD library, a soaring former bank lobby in downtown Providence. The show had moments of fantasy and camp, but for the most part, these RISD seniors quite literally meant business: Their looks were wearable, saleable and well-edited. The offerings in men’s wear, created by both male and female designers, were especially strong.

“I’ve been working with them for a year, getting them to think about who they are and who they want to be, creatively, for the future,” said Neil Gilks, head of RISD’s apparel department. “It’s a very savvy group and the work is bloody good.” Francesco Fucci, head designer at The Row, and Henry Zankov, senior knitwear designer at Diane von Furstenberg, were among the industry talents who served as advisors for this graduating class, meeting with students several times during the year.

Ka Young Jeong, who has interned at Marc Jacobs, showed a half-dozen looks (billed as men’s wear, though with unisex appeal) built around grommets. Working with multiple sizes, she ran quarter-size rings down a sleeve or at the shoulder junction; with handfuls of pencil eraser-size grommets, a pair of slouchy pants turned into modern chain mail. The rings fastened, adorned — and winked at the “breathability” of today’s activewear.

Annice Chen, who interned at Derek Lam and who will work for Levi’s after graduation, showed off her strength in pattern-making and draping through a collection that blended influences from a childhood spent half in the U.S. and half in Shanghai. The collection began with long white dresses, and moved to looks in grays, moody blues and navy, a nod to the colors of foggy Chinese mountains. Throughout, she kept her looks fluid, playing with long lines, asymmetry and kimono wrapping.

Allison Morgan showed off the results of a dual degree with Brown University and RISD (she spent alternate semesters on each campus, studying art history and French at Brown; apparel design at RISD). For Collection, she created bold, painterly appliqués on simple silhouettes. She spent hours sourcing beads and vintage jewelry locally (Providence was once the hub of U.S. jewelry manufacturing).

Other RISD seniors went for costume and/or conceptual looks. Adam Blake’s “Big League Chew” was a ready-for-Broadway run based on childhood memories of watching his brother “the jock” play baseball while he, the artsy sibling, sat on the sidelines. Blake featured Astroturf shorts with oversized white lacing that mimicked baseball stitching, crinkly shorts and capes reminiscent of hot dog foil, and a crop-top sequined with the blue-and-orange Citgo sign, a famous Fenway Park landmark.

Taylor Greenberg Goldy distorted shape and volume, sending out dresses whose hems connected back to sleeves in Dr. Seussian ways, and a final, massive puffer jacket/dress where the severed sleeves were patched, like giant caterpillars, back onto the neck area. “It was a monster to work on,” she joked. “I could barely fit it under the [sewing] machine.” But such fantasy work, she says, was a nice change of pace from the rigorous pragmatism of her summer internship at NASA’s Johnson Space Center — and doubtless from next year too, when she’ll be at Harvard’s Wyss Institute, working on robotics projects in their functional apparel design group.