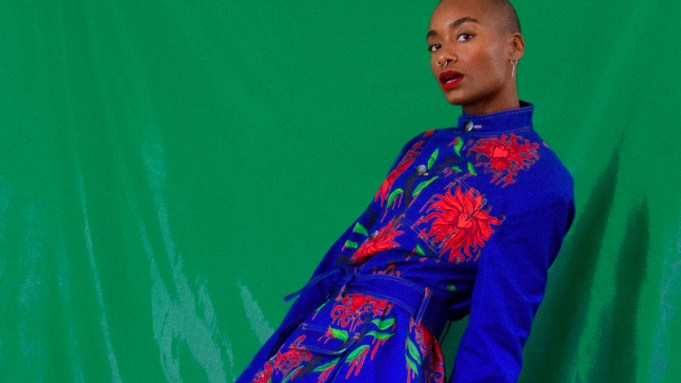 PARIS — Launching a new brand in the middle of a global pandemic may seem counterintuitive, but 23-year-old Charles de Vilmorin is a man in a hurry.

Having graduated from the Ecole de la Chambre Syndicale de la Couture Parisienne last year, the French designer received a windfall when an anonymous benefactor snapped up his graduate collection. He used the money to fund his debut, a line of patchwork quilted bomber jackets inspired by French artist Niki de Saint Phalle.

“It was supposed to come out before the confinement,” de Vilmorin recalled in a Zoom conversation. Instead, he found himself cooped up in his tiny attic studio in Paris, where he kept himself busy drawing, designing masks and making hand-painted shirts out of old tablecloths.

With the end of the lockdown finally in sight, he launched his brand and web site on April 30. “I was very impatient,” he said. The timing proved propitious: starved of shows and events, the fashion community lapped up his colorful universe tinged with darkness.

“Everyone was on Internet and Instagram, searching for something new,” said de Vilmorin, his floppy fringe obscuring his face. With their oversize proportions, and vibrant patterns incorporating eyes, hearts and lips, his jackets felt like a timely antidote to the ambient gloom. “It was quite unexpected and it struck a chord,” he said.

Patterns feature tendril-like flowers with thorny stems dripping with blood, and monstrous creatures with razor-sharp fangs. Available to pre-order though his web site, the pieces will be priced roughly between 300 euros and 600 euros.

“Designing this line was very instinctive,” he said. “Having spent four years in a school where you always had to explain everything you did, these two collections just flew out of me.”

He’s also preparing his first fashion show, which he hopes to stage in January, coronavirus permitting. Having grown up in an artistic environment — his mother is a painter, and French novelist Louise de Vilmorin was a “distant aunt” — he hopes to build a 360-degree environment around his clothes.

“I imagine my clothes as part of a complete universe with real personalities, music, lights and smells. It’s really important to me to showcase them in a performance,” said de Vilmorin, who grew up admiring designers like Alexander McQueen, John Galliano and Yves Saint Laurent.

His personal style — when not modeling his own creations, he favors a neutral wardrobe with a Seventies vibe — has earned him physical comparisons to a young Saint Laurent. But his Instagram suggests a more theatrical bent, with saturated images that convey a powerful, singular identity.

The music world has also taken notice. De Vilmorin has helmed the video for Lou Doillon’s upcoming single “Look at Me Now,” as well as designing a dress for the project. In addition, he has created four dresses and directed a clip for Laurie Darmon, and designed outfits for a third video for Charlotte Le Bon.

“I like to try my hand at everything and test my limits,” he said. He’s even mapped out his next step. “I would love to get hired by a brand and to be able to do that in parallel with my continuing my brand.”