Five Tokyo-based designers of the moment aim to build an international presence. 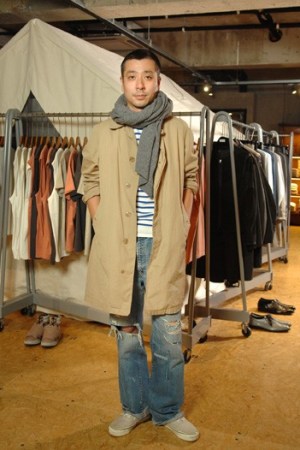 Tokyo is proving to be a fertile environment for young men’s wear designers. Despite Japan’s economic stagnation in recent years, neighborhoods such as Jingumae and Daikanyama are teeming with edgy boutiques and fresh men’s labels ready to raise their international profiles.

Here are standouts from the new crop: five designers, all in their 30s, who take a quintessentially Japanese approach to sportswear, scouting out the latest high-tech fabrics and paying meticulous attention to detail, down to the choice of an antique button or the lining of a jacket. Most of them are gearing up to present their collections in New York or Paris—partly in an effort to find relief from the pressures of doing business in Tokyo. “It’s a really difficult market here,” says designer Yosuke Aizawa, “so I think that’s why more men’s brands are looking abroad.”

The pieces under each label vary (from N.Hoolywood’s military fatigues to Phenomenon’s long pleated trenchcoats), as do the people and places each designer looks to for inspiration (from Ralph Lauren to the Beat Generation). But these five share a common goal: to indulge what Factotum’s Koji Udo describes as a distinctly Japanese obsession—“to look cool.”

N.Hoolywood
Name: Daisuke Obana
Age: 36
Background: A former vintage clothing buyer, he began reworking old pieces to create new ones. “Japanese people think the most important thing about vintage clothing is the condition, but I really liked dirty T-shirts.”
Inspiration: “The history of the United States.”
The Label: Based on Obana’s nickname, “Mister Hollywood.” The quirky spelling plays off the fact that he’s still a Japanese guy despite frequent trips to the U.S.
Where Sold: Opening Ceremony, New York and Los Angeles; Blackbird, Seattle, and Vertice, London.
Theme For Fall: The Vietnam War. Obana sent real-life military personnel in fatigues and khaki down a sandbag-lined runway.
Plans: A presentation in New York for spring.

John Lawrence Sullivan
Name: Arashi Yanagawa
Age: 35
Background: Formerly a professional boxer, Yanagawa got his start designing his own boxing gear, including fringed trunks. “I started boxing because my father influenced me, but always knew I wanted to do fashion someday.”
Inspiration: Ralph Lauren. “There are edgier and more high-fashion brands, but as far as the base of my work goes, I most admire Ralph Lauren.”
The Label: Named after a 19thcentury heavyweight champion.
Where Sold: Joyce, Hong Kong; H Lorenzo, Los Angeles, and 10 Corso Como, Seoul.
Theme For Fall: The Beat Generation. “I looked at photos and researched colors from that era and kept expanding from there.”
Plans: Might show in Paris for spring, but has not yet decided.

Factotum
Name: Koji Udo
Age: 38
Background: Studied fashion at Tokyo Mode Gakuen, then worked as a salesman at the iconic store Beams. Later helped launch the Lounge Lizard line.
Inspiration: Each season, Udo travels to a new place. Past destinations include Ireland, India and Berlin. “[The clothes] are kind of like souvenirs, but it’s still basic, wearable stuff.”
The Label: Takes its name from the Charles Bukowski novel.
Where Sold: Aloha Rag, New York; Lane Crawford, Hong Kong, and H Lorenzo, Los Angeles.
Theme For Fall: Tibet. Udo transformed a geometric Tibetan pattern into a print on a high-tech polyester jacket.
Plans: To take a break from the runway and focus on expansion.

Phenomenon
Name: Takeshi Osumi
Age: 36
Background: Designed for the street brand Swagger, which he has run with a partner for 10 years. Inspiration: Hip-hop. “It uses a lot of sampling, and I think it’s similar to clothing. With clothes, you take classic styles, newer things, street styles and you mix them together.”
The Label: Named after the famous rapper, the brand has an edgy, urban feel.
Where Sold: Joyce, Hong Kong; H Lorenzo, Los Angeles, and Club 21, Singapore.
Theme For Fall: The garage— garage rock, projects people work on in their garages and the items that are stored there. Osumi combined mink, fleece and pile into one jacket and conceived a long coat as a hybrid between a motorcycle jacket and an old kimono.
Plans: “I’d like to try a presentation or show in New York or Paris or somewhere internationally.”

White Mountaineering
Name: Yosuke Aizawa
Age: 32
Background: Studied textile design at Tokyo’s Tama Art University, then joined Junya Watanabe’s staff at Comme des Garçons.
Inspiration: Technical challenges. Like his former sensei, Watanabe, Aizawa designs his own textiles from scratch.
The Label: Stands for stylish yet functional outerwear.
Where Sold: Colette, Paris; Antonia, Milan, and Union, Los Angeles.
Theme For Fall: An outdoorsy take on the Scottish Highlands. Aizawa layered his models with jacquards, Fair Isle knits, parkas and puffy vests.
Plans: To present his fall collection in New York in January. “While I think it will be a bit of a challenge to exhibit internationally, it’s sort of a natural progression.”