From the rigor of sports to the call of the Orient, inspiration comes in many guises. 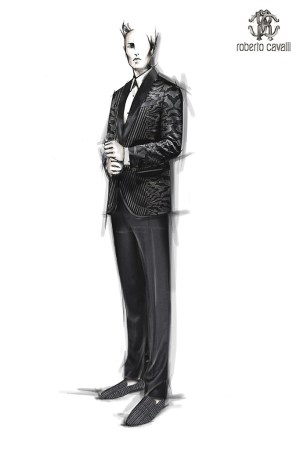 From the rigor of sports to the call of the Orient, inspiration comes in many guises for designers set to show in Milan.

“Damascus steel is the precious inspiration for a sharp and charming masculine allure, where elegance is the protagonist. The exquisite designs and the architectural sobriety derived from the world of rare knives, and blades create a sophisticated and sensual universe made to be discovered and savored — cool, refined and timeless as style itself.”

“A recovery of classical antiquity and beauty without compromises: a perfect physicality, the rigor of sports, masculine moments of leisure. Reminiscent of the Thirties, an expression of the true soul of architectural rationalism — in the background, a city with metaphysical contours accentuates the ideal of an absolute linear purity. The color range, from white to light blue up to blue, is accentuated by green grass and rust.”

“Zorro is the man without a face, doing good without being recognized and rewarded. He is one who gives without asking, he is one who serves, who puts himself at others’ service without demanding anything in return. This is the true revolution!”

“In recognition of Missoni’s 60th anniversary, the collection draws inspiration from the family’s focus on innovating new knit techniques, this season inspired by the radiant textiles and landscapes of West Africa.”

“With the attempts to control Nature, humankind has created a new, futuristic, technological yet furious Nature. The next environment will be wilder and unpredictable. New generations of urban botanical gardens, new species, odd forms and new synthetic colors. A silent war between two contrasting worlds. Nature against technology.’’

“For spring-summer 2014, Canali wisely mixes its Italian soul with an international spirit. Giorgio Morandi and Yves Klein are the two main muses for colors, patterns and shapes.”

“From Mantua to Sumatra, passing through Shanghai…by air, sea or land…a journey to the edge of the Orient, stretched toward the future to serve an aesthetic with influences running from the traditional to the ultramodern.”

“The thought of what felt relevant for spring coincided with the need to think about purity and honesty of the shapes, colors and textiles whilst exploring something romantic.”

“There was once a Turkish gentleman….”

“The new men’s collection is inspired by the creative contrast between the organic feel and the technical concept.”

“A reinterpretation of abstract geometric installations applied to form, fit and graphics.”

“The collection is a balance between utility and adventure — the two pillars of the Belstaff brand.”

“For the upcoming season, I thought of a man with a strong, timeless style.”

“The power of glamour with an eccentric attitude.”

“The new Andrea Incontri collection is dedicated to life on the seaside and the figure of the lighthouse keeper.”

“Under the summer sun, there’s still room for sartorial elegance.”

“The Jet Set man: a modern attitude, where fashion meets comfort and performance.”

“Signature prints are reproduced on fabrics and various materials, with new combinations of textures — for instance, a glossy white trench of coated linen. Paisley, batik, geometric and optical graphics appear on garments like hallucinations, even on denim. The tailored suit, striped or printed, needs to be worn with a poplin shirt with the collar popped.”

“The inspiration of the new Iceberg men’s collection stems from the observation of urban attitudes — to discover dynamism and metropolitan movement.”