Peter Rizzo is ready to get the Marithé & François Girbaud business moving in the U.S., into profitability, a new showroom and new fashion direction. 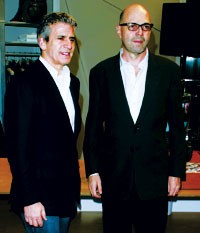 NEW YORK — Peter Rizzo is ready to get the Marithé & François Girbaud business moving in the U.S. — into profitability, a new showroom and a fresh fashion direction.

Rizzo, a former president of Bergdorf Goodman who joined the brand’s U.S. licensee, I.C. Isaacs & Co., as chief executive in December, said in an interview this week that new brand positioning will help to double the company’s women’s business next year.

The women’s business — a sportswear line that revolves around jeans — represented $9 million of the $66.2 million in total 2003 revenues at Isaacs, which has been Girbaud’s North American licensee since 1999. Under Rizzo’s leadership, the company returned to profitability in the first quarter of 2004, posting net income of $864,581, after years of losses, including $1.7 million in 2003.

“It looks like we’re going to make a profit this year, for the first time in a long time,” Rizzo said.

He said he has a plan to raise the Girbaud name’s prestige level in the U.S.

“The brand, internationally, has a very chic, streetwear business, but it has not been marketed that way in the U.S.,” Rizzo said. Referring to previous management of the line, he said, “They positioned the Girbaud brand in an urban kind of market.”

While Rizzo does not intend to walk away from the urban market, he said the Girbaud brand can appeal to a more diverse customer base.

“It is urban, it is suburban, it is international, multinational, whatever you want to call it,” he said. “If you look at what’s happening with the urban brands, they’ve all gone toward sophisticated, more international concepts.”

In building up the women’s assortment, the brand has drawn on the Girbaud signature line shown in Paris for inspiration, interpreting intricate styles with cargo pockets, drawstrings to adjust length and zippered cuffs. Rizzo indicated that the company might push its top price points higher, but emphasized that there would be no abrupt changes.

“Like everything you do in life, you go gradually and slowly,” he said. “We will be true to our existing channels” of distribution.

This story first appeared in the July 15, 2004 issue of WWD. Subscribe Today.

The jeans line is sold at 1,400 U.S. retailers, 85 percent of them specialty stores. The company is focused on building its sales through current accounts and plans to begin seeking to grow distribution with the spring season.

Rizzo is planning to move the firm into new space in an effort to symbolize the revamp. The company signed a lease last week for an 18,500-square-foot floor at 475 10th Avenue, a building on the far West Side of Manhattan that is home to companies such as Time Out New York magazine, Donna Karan Home Furnishings, Laird & Partners advertising and Ian Schraeger Hotels.

I.C. Isaacs’ new offices, which it expects to move into around the end of the year, are a little more than a mile away from the company’s current location in the Empire State Building, but Rizzo said it’s a world away in terms of mindset.

“It’s a downtown feeling uptown,” he said, referring to the 14-story building between West 35th and 36th Streets, which offers views of the Hudson River, Lower Manhattan and Midtown. “You can’t get that kind of environment with those views in a building uptown. It just doesn’t exist.”

Laura Pomerantz, a principal at real estate firm PBS Realty Advisors, brokered the deal for Isaacs and the landlord, The Adler Group.

Isaacs has been shaken up since investment vehicles controlled by François Girbaud himself in 2002 took a 42.2 percent stake in the publicly traded company and gained control of the board.

Rizzo said Isaacs is considering the idea of more stores, but, “I don’t think there’s any urgency to it. There’s not a lot of cities we want to be in anyway.”

He wants to bring a retail feel to the new showroom. Going over a proposed floor plan, Rizzo he said he is seeking to have the space convey the possibilities of Girbaud as a lifestyle brand. He is determined to make a south-facing 60-foot- by-30-foot section of the floor suitable for runway shows.

The windows of that space provide a view of the Statue of Liberty, which like the Girbaud brand, is of French origin, he said.