The new father talks love and family at his new townhouse days before the Marc Jacobs show. 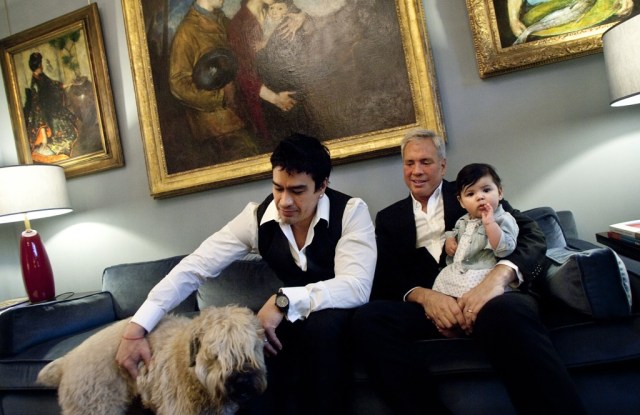 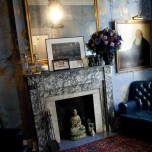 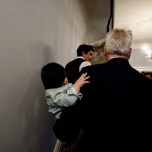 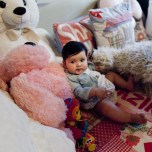 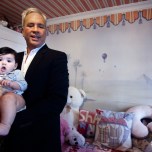 Everyone knows what comes after that. The playground chant has become a reality for Robert Duffy, who married Alex Cespedes in Provincetown, Mass., in 2010. Then, after a year-long domestic adoption process, last summer they brought home Victoria Alexis Duffy — all 9 pounds, 12 ounces and 22 inches of her.

Shortly after that memorable August day, the Duffys sold their West Village townhouse and bought a new, larger one nearby, moving into the Ritz-Carlton as a makeshift home-away during renovations. In the midst of it all, the Marc Jacobs president underwent surgery for a hip replacement and has been recovering while he and Alex, a real estate executive-turned-stay-at-home dad, adjusted to life as new parents.

“When we first started getting serious about each other, Alex told me that he wanted to have children,” Robert says, recalling his initial reaction: “I’ve got 2,000 of them working with me, I have 14 godchildren, and I am 57.” Realizing it was basically now or never, the pair embarked on an open adoption that allowed them to get to know Victoria’s biological mother during her pregnancy, with permission for them to meet if their daughter wishes to do so one day. Alex was in the delivery room when Victoria, named after his mother, was born on Aug. 5. “Alex caught her and cut the cord,” recalls Robert, who was at the hospital but didn’t witness the birth. “I was the coward.”

It’s the Friday before the Marc Jacobs fall show and the family of three is sitting on the couch in their new townhouse’s art-filled living room. “My priorities changed completely,” says Robert, with Victoria in his lap. “I was always just working. My job has been my life. Marc and I started the company in 1984 and he was my family. All of a sudden, within the three last years, I am married with a kid. In the past, there was no way that I would be sitting here doing this so close to the show, but I want to be at home now. I want to be with the baby.”

Alex, for his part, is equally over the moon. “Everything was surprising,” he says. “The love, the joy, the happiness you have with a baby. People said you wouldn’t realize it until you have one yourself and I didn’t. I live for her.”

Both admit that they have learned a lot — not just about parenting but also about themselves and their relationship. Shortly after she was born, for instance, Victoria was sleeping through the night, but more recently she started teething and that, coupled with her two nannies trying to teach her to sleep without milk at night, has caused some sleeplessness at Casa Duffy. Why no milk at bedtime? “Our biggest fight was that she was getting really heavy,” Duffy says. “I’d say, ‘She is being overfed.’ He’d say, ‘No she’s not, all babies are fat.’ Then I took her to the park one day and had her on a swing, and this lady said to me, ‘Why don’t you let your baby walk? I said that she can’t walk yet and she was like, ‘Oh, I am so sorry.’ The lady thought she was two years old. I came home and was like, ‘Alex, she is eating too much.’”

So they took her to the pediatrician who advised them to wean her off of nighttime milk. “I keep saying childhood obesity starts in infancy, and Alex says, ‘So does anorexia,’” Robert quips.

Baby Victoria has multiple godparents, one of whom is Marc Jacobs. The designer’s reaction when Robert asked him to do the honors? “All Marc said was, ‘Robert you can’t be serious that if something happened to you and Alex, I would get the baby,” Robert recalls. “‘No,’ I said. ‘But you oversee her interests, and her financial interest in the company. I don’t trust anybody else, other than my husband.’ Strangely enough, Marc is the only person in the world I trust unconditionally to do the right things. It was so important to me that he would be a godfather, not because I think that he would raise her, but I know that he would make sure that she would be raised properly.”

But so far, Robert only remembers one occasion when Jacobs spent some time with Victoria. “He’s not interested at all,” Robert says, laughing. “Every once in a while he says, ‘How is she?’ and I say, ‘Good.’” For Christmas, the designer gave her a Tiffany silver bank — filled with money.

It’s basically a given that Victoria is already one of the best-dressed children in New York. While she isn’t wearing Little Marc on this day (Robert dressed her in a printed dress — a gift from Sofia Coppola — and a Chloe denim jacket), she has already influenced the line. “Little Marc went from 100 skus to 300 skus because I now know what people need — onesies with zippers. Forget the snaps and buttons. We tried to make it look like a little collection, but really that’s not how kids dress.”

While Victoria can’t yet voice her sartorial opinion, her parents say they can tell when she’s most comfortable. “She likes cotton clothes, she likes denim. She likes corduroy jeans and cargo pants and hoodies with the hood up,” Robert says. On that note, he predicts she won’t grow into a fashionista. “I think she is going to be like a Cape Cod girl. She’s going to have flowers in her hair and listen to Carly Simon songs.”

Six months into fatherhood, the Duffys are settling into their new lives nicely, and their house feels, well, homey. One room has been hand painted with Chinese motifs by muralist Matthew Austin, with an antique Chinese lantern hanging from the ceiling, while the living room features a mix of Deco furniture. “I said to my decorator Richard McGeehan, ‘You’re not buying anything new,” Robert says. “We are using all this old furniture I had in storage.”

For someone like Robert, who has masterminded Jacobs’ spectacular runway productions, it’s little surprise that a mundane pink bedroom wouldn’t cut it for Victoria. Instead, Austin used a photo of Robert in Egypt as his inspiration and created a trompe l’oeil tent with a desert view, replete with camels in the distance. Across from her crib is a gilded gold bed Robert found on a recent trip to Beirut, which has been accessorized with Little Marc pillows and a quilt. “She loves animals,” Robert says. So she has a stuffed kangaroo with a baby in its pocket, a zebra, white and pink bears and a replica of Hudson, the Duffy’s Wheaten terrier (he used to sleep under her crib but she would pull at his fur). While the little lady already has an equally fanciful room in the Duffy’s Savannah house, she was given a less elaborate one at the couple’s beach home. “In Provincetown,” Robert says, “she just has an ocean view.”