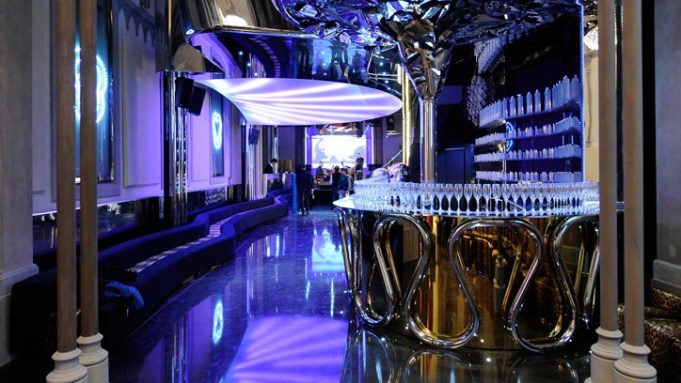 MILAN — Roberto Cavalli chose a 15th-century deconsecrated church in Florence as the location for his first club, which was unveiled Saturday with a party attended by guests such as Gerri Halliwell and Asia Argento.

The Florence club is only the first step for the designer, however, as others are set to open in Dubai at the end of January, and in Milan in February. In Dubai, the designer will sell Cavalli Club merchandise — from lamps and cutlery, to china and glassware. In an interview at his sprawling apartment in Milan, Cavalli said the project is a prelude to his return to a namesake home collection.

“I feel I helped recover a real jewel,” said Cavalli of the church that lodges the club and is located near the 13th-century Basilica di Santa Maria del Carmine, adorned with Renaissance masterpieces by artists such as Masaccio and Masolino. The church was in need of restoration, and Cavalli said he invested 3 million euros, or $4 million at current exchange rates, in the project. Given Italy’s strict regulations to protect national artworks, the club uses the building’s original structure without altering it.

Cavalli, with the help of longtime collaborator architect Italo Rota, took advantage of the high ceilings and vaults and added an additional level to the church. A lounge bar is located on the ground floor; a stage with a piano is placed in a niche where the altar used to be, and a 50-seat restaurant is on the upper floor. Cavalli opted to reproduce the concept of his stores on the site, and completed the decor with an allegory of nature: a mirrored steel ceiling; steel leaves decorating the columns; gold details; a huge twisting steel snake on the side of the bar; an aquarium; an oversize shell on one wall, and seats upholstered with animal prints are some of the main elements.

“I know Florentines will criticize this decor because it’s hard for them to get used to mixing modernity and tradition, and it would certainly have been easier to go with classic Florentine designs, but I wanted to convey my own style,” said Cavalli. “I like the juxtaposition of innovation and restoration. There is harmony in blending present and past, and I think this is an avant-garde locale that was missing in Florence.”

The city will also be represented in Dubai’s Club, with giant photos of Florence reproduced on curtains that separate different areas, such as the sushi bar, the Italian restaurant or the VIP room. The Dubai venue — which will have “a huge stairway,” plenty of glittering Swarovski crystals, a red carpet and Cavalli-clad female ushers — will cost the designer’s local partner $20 million.

As reported earlier this year, the designer has teamed up with Pragma Group, based in the United Arab Emirates, which is a leading investment, outsourcing and business incubator with an expansive portfolio of international companies in technology, telecommunications, marketing, hospitality, entertainment and venture capital. Cavalli said he was “not worried” about Dubai’s economy, although he conceded “it’s slowing down, and the city of Abu Dhabi is picking up.”

The designer is also working on renovating Milan’s former Just Cavalli Café and turning it into a Club. “This is such a special location, next to the Triennale Museum, under a tower designed by Gio Ponti,” he said. “I’m looking for a unique space in New York, too.”

Cavalli underscored that his clubs are not members only and that they are an extension of his lifestyle concept. “The idea is to let others into my world,” he said.